M.S. Dhoni’s batting position will be under spotlight.

Thiruvananthapuram: In Thiruvananthapuram’s political history a Scot by the name Col. John Munro is held in high esteem. As a British Resident and later Diwan of the princely state of Travancore that had Thiruvananthapuram as its capital, Munro was surprisingly popular among public and the rulers of the land that in his honour an archipelago in south Kerala is named Munro Island.

It is quite a coincidence that a namesake of the 19th century statesman, a cricketer from down under, has, rather involuntarily, treaded into the modern history of the city. Not only did Colin Munro’s bludgeoning 54-ball hundred in Rajkot last week help the visitors level the series 1-1, it also turned the spotlight on Kerala’s capital, a city so anxiously in pursuit of rediscovering itself on India’s cricket map.

Thiruvananthapuram’s tete-a-tete with the ball game is few and far between and the only other time an international cricket match was played in the city (at the University Stadium) was on January 25, 1988 when Sir Vivian Richards’ West Indies visited and won an insignificant seventh ODI, bagging the series 6-1. 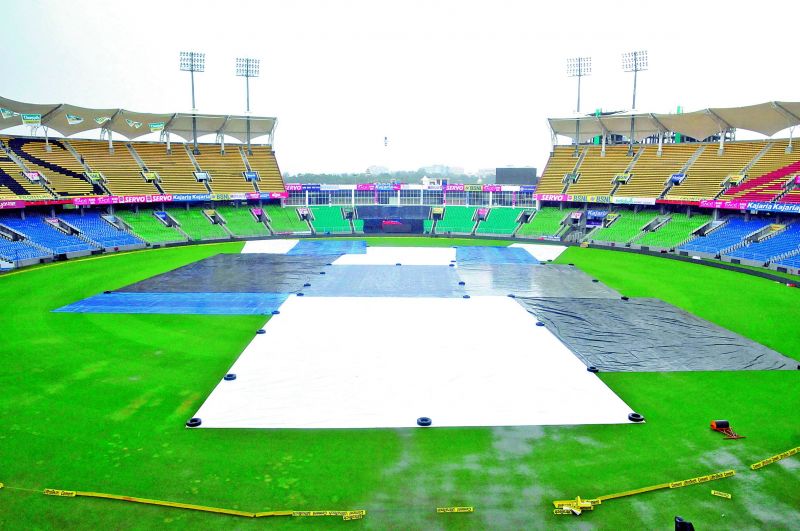 The Greenfield Stadium ground is under covers on the eve of its international debut. (Photo: AV MUZAFAR)

It could be argued that without Munro’s match-winning exploits in Saurashtra, India had a better chance of wrapping up the second of the three-match T20 internationals, making the final game at the Sports Hub at Karyavattom here on Tuesday a dead rubber. Instead Munro magic on the weekend has turned the tie into a crucial encounter, one that holds great significance, not just for the debuting venue but for the hosts who haven’t lost a home series in over two years.

True to their tag of being the No. 1 side in T20 internationals, the Kiwis’ resilience would be key in the crunch contest and Virat Kohli and company would not want to experiment with combinations, like they have done so far in series, most recently, by offering debut to Hyderabad seamer Mohammed Siraj, at the expense of an extra batsman.

M.S. Dhoni’s batting position will be under spotlight. VVS Laxman, in no uncertain terms, has said that while Dhoni can still be a part of ODIs, it’s time to groom someone new in the shortest format. Ajit Agarkar too echoed the views of the Hyderabadi.

While openers Rohit Sharma and Shikhar Dhawan were instrumental in the first match their vanishing act was detrimental in the second game, making the task of chasing a near-200 score daunting, even for some of the game’s acclaimed finishers. Just as India needs immediate fix in the middle order as Hardik Pandya’s poor returns have been conspicuous, it also requires Yuzvendra Chahal and Axar Patel to step out of the shadows of Ish Sodhi and Mitchell Santner, who were economical and effective the other day.