As per the post, Ganguly urged Murali Vijay and Ajinkya Rahane to play with more determination while asking Kohli not to make too many experiments. (Photo: PTI)

Mumbai: Sourav Ganguly has clarified his comments over a recent Instagram post by his name that spoke of the Indian cricket team’s selection policy in the Edgbaston Test defeat against England.

The former India captain, who is in the United Kingdom as a broadcaster took to his verified Twitter handle on Monday and said that he didn't have an account on Instagram. "My Instagram page is a fake one ..please don’t pick up any news or quotes from it ..Will report to Instagram immediately," he wrote after many media organisations and news agencies quoted his fake post.

My Instagram page is a fake one ..please don’t pick up any news or quotes from it ..Will report to Instagram immediately @samiprajguru @imVkohli

The picture and account which has now been taken down from the social networking site posted a picture of the 46-year-old with a long post speaking about Virat Kohli-led India’s 31 run defeat in the opening Test.

As per the post, Ganguly urged Murali Vijay and Ajinkya Rahane to play with more determination while asking Kohli not to make too many experiments.

Here is what was posted: 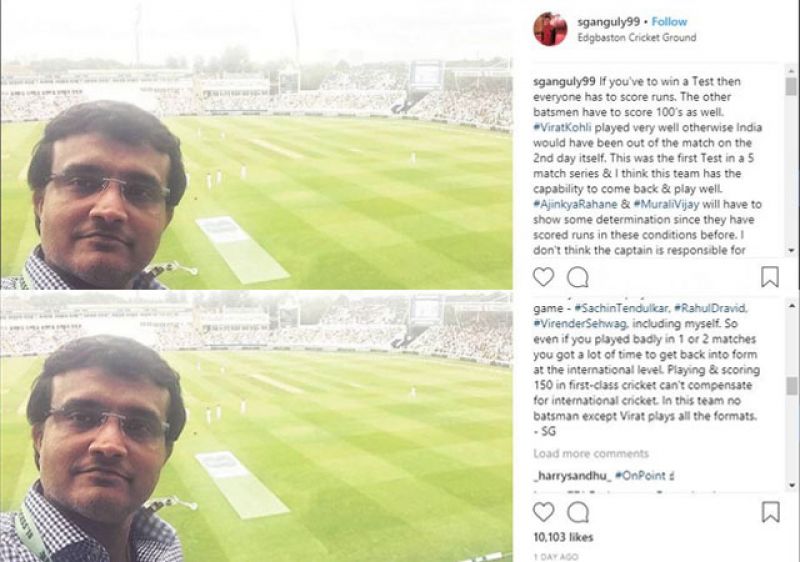 "If you've to win a Test then everyone has to score runs. This was the first Test in a 5 match series & I think this team has the capability to come back & play well. #AjinkyaRahane & #MuraliVijay will have to show some determination since they have scored runs in these conditions before."

"I don't think the captain is responsible for the loss. If you're the captain then you'll be criticised for a loss the same way as you're congratulated for a win."

"One criticism for @Virat.Kohli is that he should give a consistent run to his batters & more time before dropping them. The failure against swing in English conditions can't be used as an excuse any more as everyone knows that it's what you get when you come to England."

"You can't be excused all the time & we have lost before in 2011 & 2014. You've to bat well. It's a very well known fact that the ball will swing in England the same way as Australia is known for its pacy wickets. So if previously you've scored runs there is no reason you can't now."

"The captain should give confidence to his players. It's his team & only he can change their mindset. He will have to sit with them & tell them that if he can do it so can they. He should give them time & tell them to go out & play without any fear."

"It is true that after continuous chopping & changing of the playing XI, players can get afraid that after all these years they've failed to garner the faith of the team management."

"The good thing about the great teams of the past - whether it be #Australia, #SouthAfrica or our very own team which won the Test series here in 2007 - was that the boys used to play both formats of the game - #SachinTendulkar, #RahulDravid, #VirenderSehwag, including myself."

"So even if you played badly in 1 or 2 matches you got a lot of time to get back into form at the international level. Playing & scoring 150 in first-class cricket can't compensate for international cricket. In this team, no batsman except Virat plays all the formats.”