LEEDS: On a day when an aircraft towing a string of political messages ruled the Headingley skies, Rohit Sharma hit the top-flight by making a record-shattering century against Sri Lanka here on Saturday. The 94-ball 103 — his fifth of the tournament — rocketed Rohit into the World Cup stratosphere, eclipsing Kumar Sangakkara’s record of the most tons scored in a single edition. He also equalled Sachin Tendulkar’s overall count of six triple-figure scores in the blue-riband tournament.

The 189-run opening stand between Rohit and KL Rahul (111 off 118 balls) set the tone for India’s comfortable chase of 265 with seven wickets in hand. The duo rather made it look easy as Sri Lanka’s centurion Angelo Mathews, at innings break, had suggested that the wicket was a bit tacky. With Rahul joining the run feast by scoring his second ODI hundred, it turned out to be an ideal preparation for the semi-finals where India will meet either England or New Zealand. 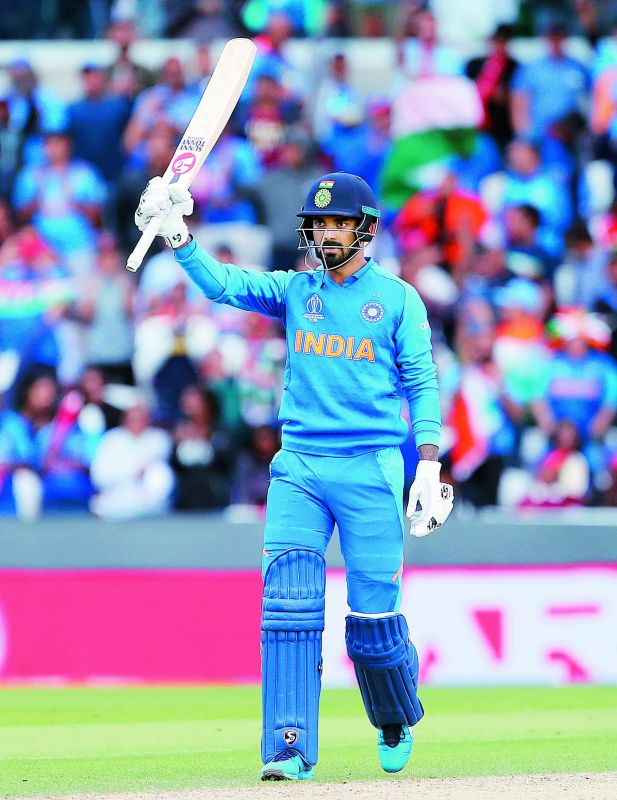 Before Saturday’s match, only once did a team successfully chase down a target of 250-plus in this World Cup. India made a mockery of Sri Lanka’s fighting total with Rohit continuing his purple patch.

His 27th ODI ton highlighted by elegant drives through the covers took Rohit’s tournament tally to 647. Now, the opener needs just 27 runs to surpass Tendulkar’s record of the most runs in a World Cup.

Balls that were pitched in Rohit’s zones were dispatched with disdain. Off-spinner Dhananjaya de Silva bore the brunt in the 17th over as Rohit clobbered him for a pair of sixes.

Earlier, Mathews continued his love affair with India as the veteran all-rounder slammed his third ODI hundred to propel Sri Lanka to 264 for seven in 50 overs. All three of his centuries have come against India.

Having lost four wickets for 55, Sri Lanka were starring down the barrel when Mathews and Lahiru Thirimanne joined hands. If not for the duo’s 124-run stand, the Lankans wouldn’t have touched the 200-run mark. Mathews then stitched a 74-run stand for the sixth wicket with Dhananjaya.

The opening spell of Jasprit Bumrah (4-2-14-2) was a delight to watch. After sending in two consecutive maidens, Bumrah induced a top-edge to dismiss the Lankan skipper Dimuth Karunarathne for 10. It was Burmah’s 100th scalp and the milestone came in his 57th ODI. The only batsman who looked fluent against the world’s No.1 bowler was young Avishka Fernando who  showed glimpses of his talent before perishing to a Hardik Pandya bouncer.

Bhuvneshwar ended with sorry figures of 1/73.