If the umpiring was accurate, Gayle's innings might have made a huge difference in the game. (Photo: AP)

In the initial overs of the match, Gayle was successful in reviewing two decision against umpire Chris Gaffaney.

But the biggest error of the game was Gaffaney missing Mitchell Starc's no ball. It was evident that it was a massive no-ball by Starc. Furthermore, Gayle was dismissed on the very next ball, which would have been a free-hit delivery if the umpire had successfully spotted the no-ball. 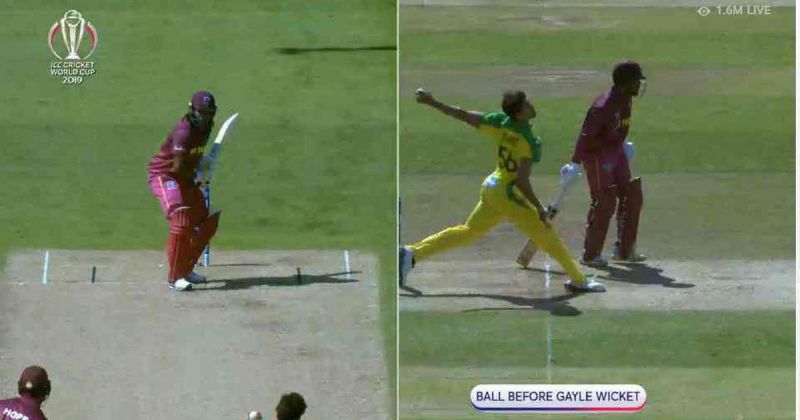 West Indies lost the match by 15 runs. If the umpiring was accurate, Gayle's innings might have made a huge difference in the game.

Twitter, along with Gayle's teammate Kieron Pollard called out the umpiring decisions of the match. Pollard expressed his discontent by sharing this picture on his Instagram.

Time and time again we tend to be on the wrong end of decisions... and the masses are not vociferous bcuz y......🤔🤔. Piss piss poor decision making in this game and it continues ... it is blatantly alarming . #gamestillnotfinish

Crowd letting the umpires have it.

4 successful reviews for the Windies so far. The ball that got Gayle should have been a Free hit. The ball b4 was not called a no-ball which it was.#CWC19 #AUSvWI pic.twitter.com/WZy6tYVG96

Twice for Gayle, twice for Holder. Four decisions reversed, along with a no-ball not being given. Terrible umpiring at #AUSvWI.

Windies have had a number of opportunities to really turn the screws. Of course, it doesn't help that Gayle shouldn't have been out but they've been their own worst enemy at times. #CWC19 #AUSvWI

#UniverseBoss Chris Gayle could have single handedly taken game away in #AUSvWI if it was given No-Ball by #Emirates Umpire. As I said during #Vivo IPL, its time fr umpires to wear #Crizal powered #Lenskart framed glasses and have #Syska LEDs in floodlight for clear view. #WIvAUS pic.twitter.com/GjX4iTGv7i

Horrible is a small word for this kind of umpiring, big big no ball not given .. For heavens sake this is WC not a club tournament, stakes are high and it was Chris Henry Gayle wicket @ICC

Utterly horrible umpiring. How can you miss such a huge no-ball? Also you had given Gayle out twice when he wasn’t out, maybe the third time Gayle should have gotten the benefit of the doubt. The umpire seemed hell bent on giving Gayle out.

No batsman has been given out three times in an innings as Gayle was.

And now we learn a missed no ball prior to his actual dismissal means he shouldn’t have been out anyway because it should have been a free hit.

Umpire failed to pick the big No Ball and Next ball Chris Gayle got out. It might have been free-hit if previous one was given No ball. That opens an interesting debate whether third umpire should check the previous ball too whenever batsman gets out... 🤔

Umpire failed to pick the big No Ball and Next ball Chris Gayle got out. It might have been free-hit if previous one was given No ball. That opens an interesting debate whether third umpire should check the previous ball too whenever batsman gets out... 🤔

Chris gaffaney finally gets the wicket of Gayle 😰 #AUSvsWI #CW2019

I hope that umpire is happy who dint want West Indies to win at any cost !! #congratsumpire .. well fought windies. Had to be looked into. #icc poor umpiring at its level best. Oh biased as well.

@ICC should seriously look at taking the front foot no-ball away from the on-field umpire n giving it to the 3rd umpire. Have a feeling it will make a huge difference IMHO #AUSvWI

Why are the umpires wearing black uniform instead of the Australian uniform? #AUSvWI

The Umpire Strikes Back. Eventually. #Gayle.

As a player, Nobody wouldve got grumpier than I at the standard of umpiring in The WI vs Aust match. Gaffaney is usually an outstanding umpire.
However, as I’ve read on Twitter, the West Indies are only in this tournament due to poor umpiring in the qualifiers in Zim. #steadyon

So ... What goes round comes round eh Scott maan ?? @scottbstyris but does it really even out ?? Anyways WI could have still won it if they batted clever in the last 10/12 overs https://t.co/wBvA4pqnFa