Bengaluru: Unlike auctions in the past, the IPL-9 didn’t reach feverish levels on Saturday. The eight franchisees, including the two newbies in the cash-rich league were prudent and tight-fisted; the purse was small and the strings were firmly in place given the constraints. And for the first time in three seasons, an overseas player — the belligerent Shane Watson — walked away with the richest purse as Royal Challengers Bangalore thwarted Sunrisers Hyderabad to net the player at Rs 9.5 crore. 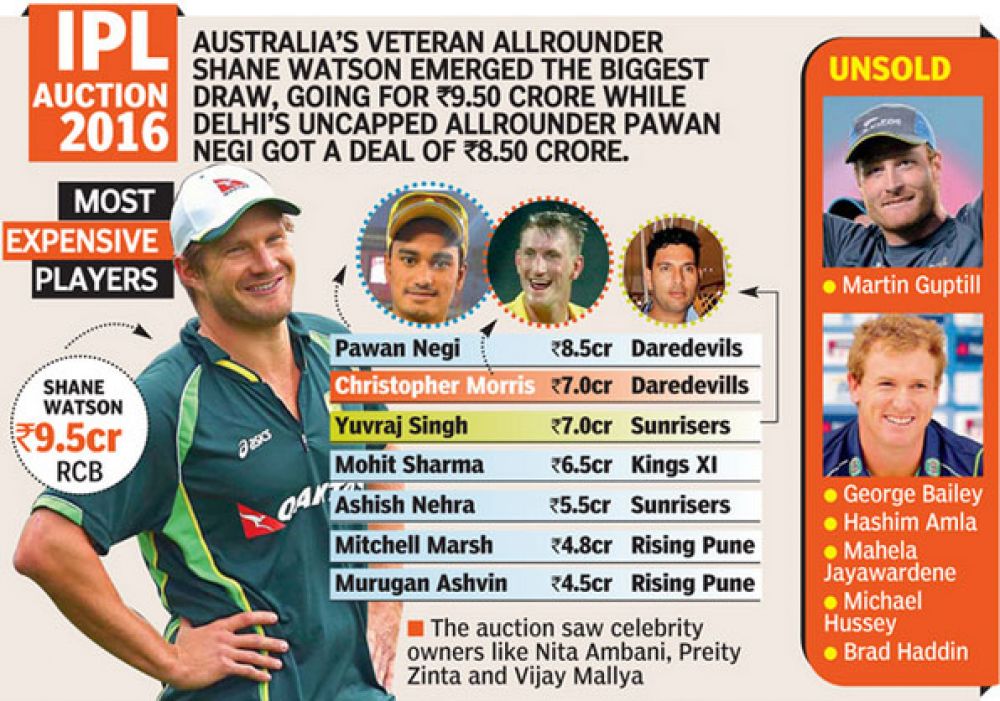 Big spenders Delhi Daredevils then almost choked up everyone present as they outbid Rising Pune Supergiants to pick up uncapped all-rounder Pawan Negi all of 23, for a whopping Rs 8.5 cr.

As opposed to the previous year’s booty where Yuvraj Singh was snared by Daredevils for a phenomenal Rs 16 cr, the teams wiser by the experience, chose to play it safe. Aussie Watson, formerly of Rajasthan will turn out for a different Royals, at least for the two next two seasons, under Virat Kohli.

The pricey Yuvraj, for whom RCB and Daredevils broke the bank the past two years was all set to don the red and gold colours of the Bangalore team again as they kept out Mumbai Indians at Rs 5.5 crore before Sunrisers swooped in on the all-rounder at Rs 7 crore. Sure, Yuvraj’s market value may have dipped over the year but at that price, he’s worth the effort for Sunrisers, who also went all out to grab Indian cricket’s wiry comeback man, Ashish Nehra for Rs 5.5 cr.

As always, there is always an element of surprise in the auction and this was no different as South African Chris Morris, formerly of CSK, whipped up immense interest amongst Mumbai, Pune, the Kings XI and Daredevils. Starting at a modest base price of Rs 50 lakh, Morris, who was set to play for Mumbai when they upped the ante at Rs 6.5 cr were stopped in their tracks by Daredevils who waltzed into the ring and snapped him up with a single bid of Rs 7 cr.

As has been their wont, Daredevils were the biggest spenders coughing up Rs 27.9 cr for five players. Having roped in Morris and Rajasthan’s wicket-keeper-bat, Sanju Samson (Rs 4.2 cr), Daredevils and the Kolkata Knight Riders raised many an eyebrow as they went all out for Carlos Brathwaite, a relative unknown commodity from Barbados.

Once in, the Daredevils rarely let go, in direct contrast to their results on the turf, and they maintained their reputation picking up all-rounder Brathwaite for Rs 4.2 crore. Staying true to form, they then beat back the challenge from Lions and Sunrisers to fetch Karnataka’s Karun Nair for a massive Rs 4 crore before almost cleaning out their account to get Negi.

Overall, the teams’ strategy at the auction was to add muscle to their squads, especially Supergiants and Gujarat Lions, who came into the auction with five players each. Mahendra Singh Dhoni’s Pune — takes a bit getting used to given his CSK days — went in with a single-minded pursuit to net Aussie Mitchell Marsh at Rs 4.8 cr stopping Preity Zinta’s concerted efforts at Rs 4.5 cr.

Interestingly, the overseas players were as much in demand as the Indians and Pune ensured maverick freelancer Kevin Pietersen would play under Dhoni this season at Rs 3.5 cr. If Zinta’s Kings XI stretched their purse to buy Mohit Sharma at Rs 6.5 cr after a tense battle with Sunrisers, Pune picked up Ishant Sharma at Rs 3.8 cr. Mumbai Indians made three big buys plumping for overseas recruits in Jos Buttler, the hard-hitting England wicket-keeper batsman for Rs 3.8 cr and Kiwi pacer Tim Southee for Rs 2.5 crore before signing uncapped Nathu Singh’s deal at Rs 3.2 crore.

Every auction follows the principle of joy and disappointment; if a few like Brathwaite laughed all the way to the bank — though one is not sure if he was even awake at that time — Dinesh Karthik, the second costliest player last time went way low at Rs 2.3 cr to Lions while Stuart Binny found just a solitary bidder in home team Challengers for his base price of Rs 2 crore. Then again, sport, as in life, is a great leveller.

Then again, having played under MS Dhoni at Chennai Super Kings and also getting picked in the Indian squad for the World T20, Negi’s already getting there.

As it transpired, the 23-year-old allrounder, who plies left-arm, emerged the sensational pi-ck of the auction w-ith home owners Delhi Daredevils rolling out the red carpet for his services at Rs 8.5 cr.  Just for good measure, his base price was set at a mere Rs 30 lakh. Talk about going some 28 times that rate!

The theme of every auction is to raise the standards of uncapped players and IPL-9 stayed true to tradition as the lot, young and bursting with talent, were paid big bucks by the franchisees.

More remarkable was the rise of Nathu Singh, relatively unknown up until a couple of months ago. The 20-year-old son of a labourer has been the whispers in cricket circles over the last few months and was even selected for the Board President’s XI to play against the South Africans.

Surely, he has been ticking off the boxes as Royal Challengers Bangalore and Mumbai Indians furiously bid for the pacer, who’s believed to hit express speeds.