Harbhajan Singh was not pleased with the exclusion of Karun Nair from the Indian squad for ODIs, T20s and warm-up games against England. (Photo: AFP)

Mumbai: Following the footsteps of his good mate Yuvraj Singh, Harbhajan Singh too deleted a tweet after the Indian squad for the limited-overs series against England was announced on Friday.

Yuvraj, who was extremely happy with inclusion in Team India under Virat Kohli’s captaincy, posted a celebratory tweet but deleted it later.

While Harbhajan was not picked in the Indian side, his disappointment was with the omission of Karun Nair.

Nair, who scored a triple hundred in the fifth and final Test against England in Chennai, was not picked in India’s ODI and T20 squad for the limited-overs series against England. What surprised Harbhajan even more was the fact that Karun was not picked even in the India A side which will face Eoin Morgan-led unit in two warm-up games ahead of the ODIs and T20s.

The Turbanator, as he is fondly called, ended his tweet saying: “Wah kamal hai.”

Harbhajan, however, deleted the tweet soon after it went viral. 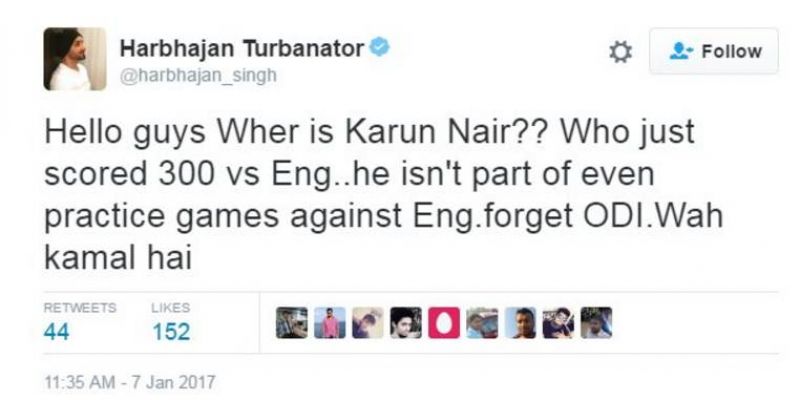 Kohli, who was appointed as India's skipper after Mahendra Singh Dhoni stepped down from limited-overs captaincy, will lead the Indian side in the three-match ODI series and three Twenty20s against Eoin Morgan-led England side.