New Delhi:  A late surge from skipper J.P. Duminy (34, 32 balls) and cameos from Sam Billings (24 off 15 balls) and Carlos Brathwaite (20 off eight) took Delhi Daredevils to 162/7 in their Indian Premier League-9 match against the Rising Pune Supergiants here on Thursday night.

Delhi Daredevils ringed in a number of changes in their XI but could never really get going before the lower order came up with some quick runs. Cruising painfully at 65/3 in 9.4 overs — with Karun Nair holding up with his 23-ball 32 — the hosts were in need of partnerships and some big hitting but with in-form batsmen Quinton de Kock and Chris Morris left out, it did not seem easy. 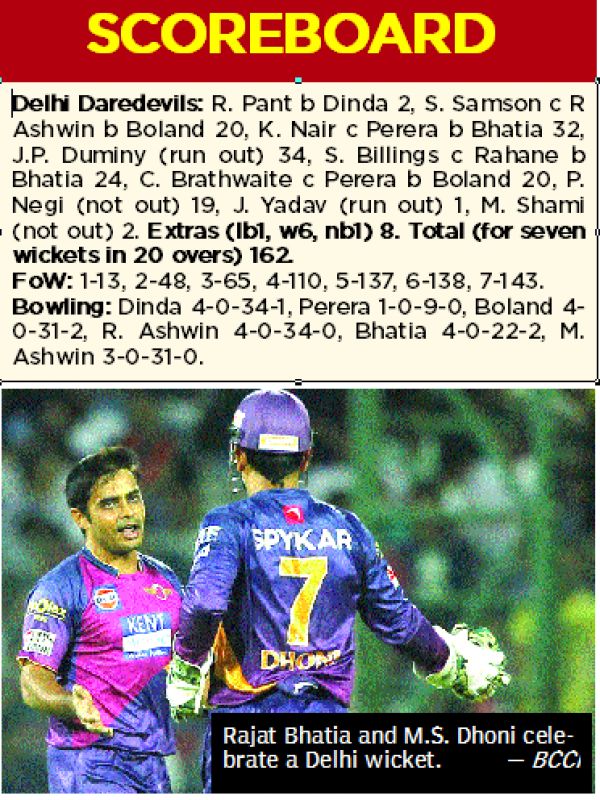 Visiting skipper Mahendra Singh Dhoni, who won the toss and invited the hosts to bat, used his limited arsenal of bowlers well and regular breakthroughs kept Delhi's progress under check. Duminy though held up one end well and found late support in Billings, as they accelerated the innings with their fourth wicket stand of 45 runs (30 balls).

The hosts reached the 100-mark in 13 overs. Billings slammed R. Ashwin (0/34) for two consecutive sixes before his innings was brought to an end by Rajat Bhatia (2/22), who bowled with a lot of accuracy. Braithwaite too entertained in his brief stay, as Delhi gathered 50 runs in the last five overs.Bhatia, familiar to the Kotla conditions this being his home ground, was the most effective for Pune while Scott Boland impressed with his 2/31.

Earlier, Delhi sprung a surprise yet again making four changes to their XI. Regular skipper Zaheer Khan missed out — with Duminy stepping in — while Chris Morris, Shahbaz Nadeem and de Kock were the surprise exclusions. Duminy put it down to niggles as Delhi brought in Imran Tahir, Duminy, Pawan Negi and Jayant Yadav.