IPL 2017: Steve Smith, Ajinkya Rahane win it in style for RPS against MI

Pune: Rising Pune Supergiants captain Steve Smith barely broke sweat, as he guided his side to a seven-wicket victory over Mumbai Indians, at the Maharashtra Cricket Association Stadium, in Pune, on Thursday.

Ajinkya Rahane (60 runs from 34 balls) had gotten RPS off to a great start, belting the Mumbai Indians bowlers all over the park. It took a brilliant diving catch by Nitish Rana to get the Team India vice-captain out.

Although Rahane’s wicket stemmed the flow of runs for a while, Smith put up a 50-run partnership with Englishman Ben Stokes, to take RPS closer to their target.

It got a little close at the end, with Jasprit Bumrah bowling a tight 19th over, but with 10 runs left to win from three balls, Smith smacked Kieron Pollard for two sixes, to bring-up the win with one ball remaining.

Mumbai Indians looked set for an average total, with wickets falling at regular intervals in their innings. However, Hardik Pandya smashed a massive 30 runs off the last over of their innings, which was bowled by Ashok Dinda. Pandya’s heroics helped take Mumbai’s total to a challenging 184 for eight.

Man of the Match: Steve Smith.

And its all over! Rising Pune Supergiants captain Steve Smith closes things off with two huge sixes off the last two balls of Kieron Pollard. RPS looked to be under pressure, with the runs piling up in the last couple of overs, but captain cool Steve Smith (with the former captain cool MS Dhoni at the other end), finished off the proceedings with great aplomb. RPS win by seven wickets.

Mahendra Singh Dhoni comes out to raptorous applause, as Ben Stokes leaves the field. This is Dhoni's first IPL game as a non-captain.

WICKET! Hardik Pandya gets the crucial breakthrough. Stokes tries to smack the ball on the leg side, but he hits it straight at Tim Southee in the deep.

And Steve Smith continues his supreme form from Test to T20 cricket, as he brings up his fifty in 37 balls. A well-paced innings, as the skipper guides his side to victory.

WICKET! And just as it looked like Rahane may have been getting ready to go the full distance, Nitish Rana pulls off a brilliant diving catch off a flat shot, to get the Team India vice-captain out. Tim Southee with the wicket.

Rahane has played a brilliantly controlled innings tonight. He got off to a flyer, and then slowed down, after the fall of Mayank's wicket.

Ajinkya Rahane is on fire tonight! He has hit four boundaries and a six to give Pune a flying start.

WICKET! McClenaghan comes up with the wicket. While Mayank was playing the sheet-anchor role. the latter hit it straight at Rohit Sharma.

A mighty over from Mumbai Indians. Pune have dominated the innings so far, but Hardik Pandya may just have given Mumbai a bit of an edge in that last over. He hit four 6s, and a boundary. 30 Runs came off that last over by Dinda.

WICKET! Adam Zampa also gets into the attack, as Rana hits his delivery straight to Rajat Bhatia in the deep.

Wickets are falling every hour for the Mumbai Indians. Imran Tahir had a serious lbw shout against Kieron Pollard, but it was turned down. Hawkeye suggested that the ball would have gone on to hit the middle stump. Pollard was lucky there.

WICKET! Brilliant bowling by Rajat Bhatia. His change of pace catches Krunal Pandya by surprise this time, as Dhoni takes an easy catch.

WICKET! Mumbai Indians are falling apart. Rayudu mis-times a Bhatia delivery, as it goes straight back to the bowler, who gratefully takes a simple catch.

The runs have dried up since the three wickets by Imran Tahir. However, Rana and Rayudu have done well to consolidate their innings.

Wicket! Imran Tahir has got the important breakthrough. Spins it round Parthiv Patel's legs, as the ball crashes into the stumps.

The players are out on the pitch, and we are ready to kick-off the second match of IPL 2017. 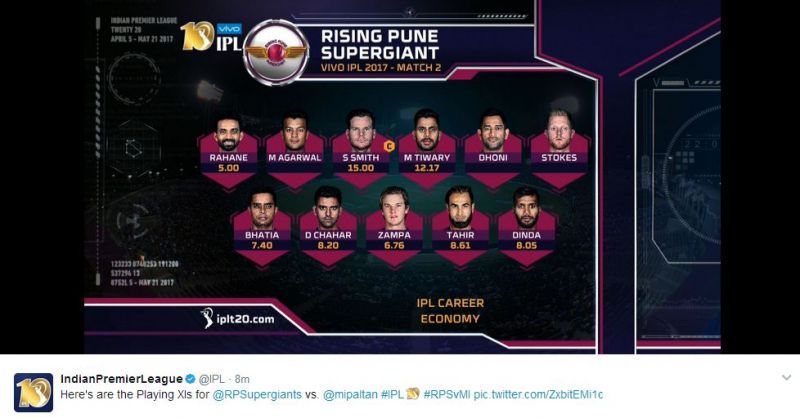 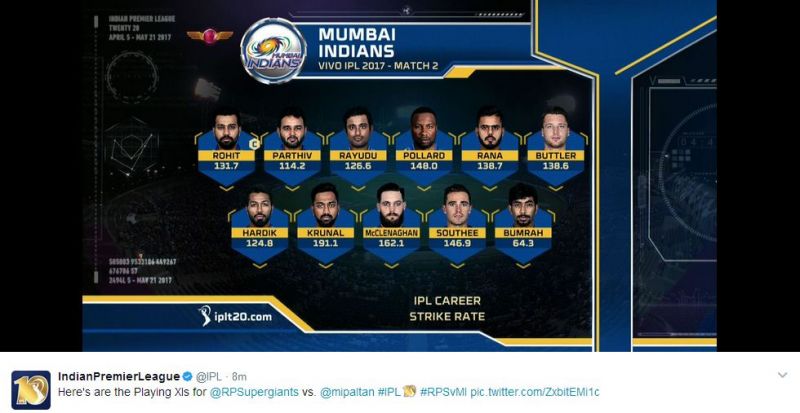 Steve Smith has won the toss, and has decided to field first. The last time Smith walked-up to the Pune pitch, the conditions were quite different.

The opening ceremony is underway in Pune. On stage is Bollywood singer Shalmali Kholgade.

Fans are gearing up for the match! 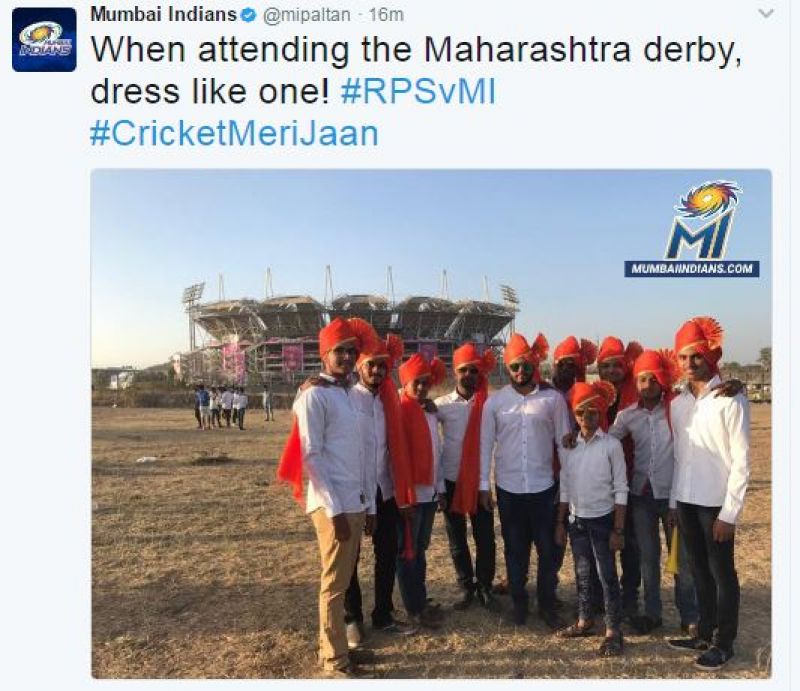 The two captains are out! 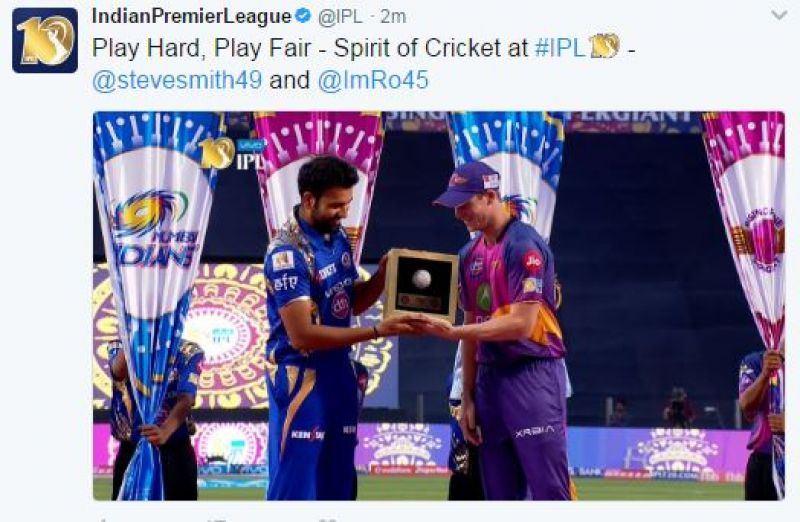 Preview: Steve Smith is all set to take over the reins of the rising Pune Supergiants, as the franchise head into their first IPL 2017 game against Mumbai Indians at the Maharashtra Cricket Association Stadium, in Pune, on Thursday.

The clash, billed as the Maharashtra derby, is set to be the first IPL game in which star Indian cricketer Mahendra Singh Dhoni will not be the captain.

With Ravichandran Ashwin being ruled out of the tournament, the bowling responsibility will fall on the shoulders of Stokes, and South Africa spinner Imran Tahir.

Their bowling lineup seems to have a bit of a bite in them too, with the presence of Lasith Malinga, Jasprit Bumrah, Mitchell Johnson and Harbhajan Singh.