Virat Kohli, who is all set to take over from MS Dhoni as Indian cricket team skipper in limited-overs cricket, posted an emotional message for Dhoni after he stepped down as India’s ODI and T20 skipper. (Photo: Virat Kohli / Twitter)

Mumbai: Virat Kohli paid an emotional tribute to MS Dhoni after he stepped down from India’s ODI and T20I captaincy. Kohli, who is already leading India’s Test team, is all set to step into Dhoni’s role as India’s ODI and T20 captain as the selectors meet on Friday to pick new Indian captain in the limited-overs cricket and the squad for the three-match ODI series and three Twenty20 against England.

Kohli, who was picked to lead ICC ODI Team of the Year, made his ODI and Test debut under Dhoni. While the Delhi batsman is currently one of the best modern day batsmen going around along side Kane Williamson, Joe Root and Steve Smith, he posted a candid message on his Twitter about India’s World Cup-winning skipper.

Kohli, who was a part of India’s World Cup triumph in 2011 and Champions Trophy win in 2013 in England under MS Dhoni, said: 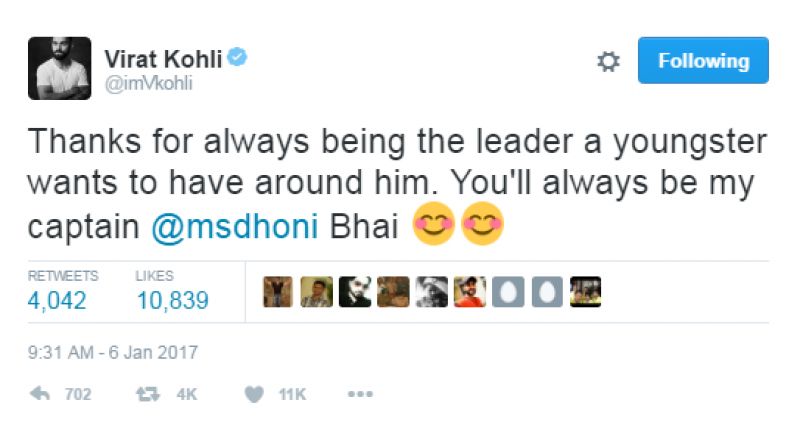 Although, in the past, there were speculation that Dhoni and Kohli did not share a good rapport, the duo have always made it a point to praise each other and have enjoyed each others' company on the field. While Dhoni has recently termed Kohli as one of the best, Kohli  has always spoken highly of Dhoni’s contribution towards Indian cricket and how he always looks to learn the tricks of captaincy from Dhoni.