Virat Kohli scored 149 and 51 in India's 31-run defeat against England at Edgnaston and has gone up by 31 points, which have helped him to end Steve Smith's 32-month reign as the top-ranked batsman and reach the top of the summit for the first time in his 67-Test career. (Photo: AP)

Dubai: India skipper Virat Kohli on Sunday topped the ICC Player Rankings for Test Batsmen, riding on his brilliant century against England in the opening Test at Edgbaston.

Kohli thus became the seventh India batsman and first since Sachin Tendulkar (in June 2011) to be ranked the number one Test batsman in the latest ICC ranking released on Sunday.

Kohli scored 149 and 51 in India's 31-run defeat and has gone up by 31 points, which have helped him to end Steve Smith's 32-month reign as the top-ranked batsman and reach the top of the summit for the first time in his 67-Test career. 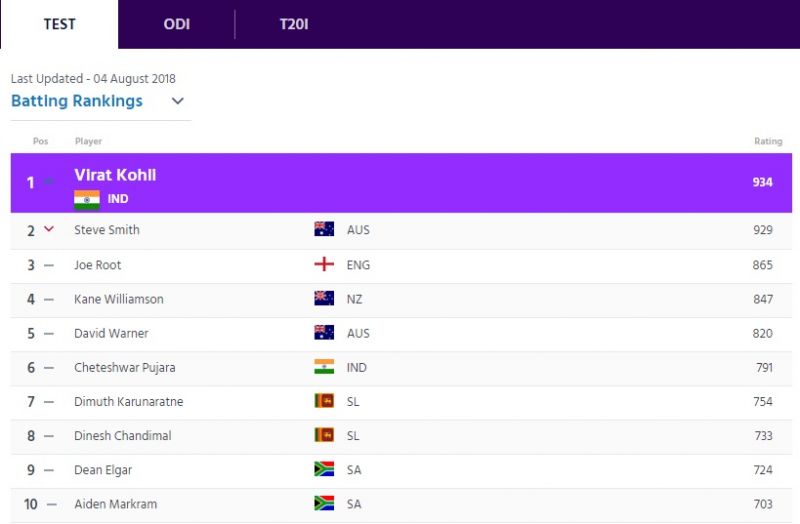 Kohli now leads Smith (who had held the top spot since December 2015) by five points, but will have to maintain the form in the remaining four Tests to finish the series as the world's highest-ranked batsman.

Tendulkar had joined South Africa's Jacques Kallis in number-one position in January 2011, but had dropped to second spot following the Jamaica Test in June 2011 after he had missed the three-Test series against the West Indies.

Apart from Kohli and Tendulkar, Rahul Dravid, Gautam Gambhir, Sunil Gavaskar, Virender Sehwag and Dilip Vengsarkar are the other India batsmen to have achieved number-one rankings during their careers.

However, at 934 points, Kohli has become India's highest-ranked batsman, 14th overall, on the all-time tally of points.

Kohli had entered the Edgbaston Test on 903 points, 13 points behind Gavaskar, and is now ahead of the ICC Cricket Hall of Famer by 18 points.

If Kohli can deliver another strong performance in the second Test at Lord's, then he can break into the top-10 by leapfrogging Matthew Hayden, Kallis and AB de Villiers, whose highest points tally was 935 each.

Donald Bradman (961) and Steve Smith (947) are the two batsmen sitting on top of this exclusive list.

Kohli, who powered India to the ICC U19 Cricket World Cup title in 2008 and then won the prestigious Sir Garfield Sobers Trophy for ICC Cricketer of the Year in 2017, is the 76th player to top the Test batting rankings.

However, other Indian batsman lost ground after the first Test with Lokesh Rahul (19th) and Ajinkya Rahane (22nd) slipping one and three places respectively.

England's wicketkeeper-batsman Jonny Bairstow improved his ranking as he now shares the 12th position with the West Indies' Kraigg Brathwaite after moving up four places.

But Alistair Cook 17th (down by four places) and Ben Stokes 33rd (down by five places) lost ground after the Edgbaston Test.

In the bowlers' table, India off-spinner Ravichandran Ashwin has gained 14 points following his four for 62 and three for 59, which means he now trails South Africa's fourth-ranked Vernon Philander by just one point.

Ishant Sharma has collected 19 points to move within 13 points of 25th-ranked team-mate Bhuvneshwar Kumar, while Mohammed Shami is in 19th spot after sliding two places.

England pacer Stuart Broad is now ranked 13th after falling one place, while James Anderson has retained his top position but his lead over Kagiso Rabada has been reduced to two points.

Stokes has compensated for his double failure with the bat by taking six wickets in the Test, including three of India's last four wickets. For this performance, he has been rewarded with a rise of four places, which has put him in 27th position.

England's 20-year-old Sam Curran is another fascinating story from what was a nerve-wracking 1000th England men's Test.

The left-handed all-rounder scored 24 and 63 with the bat, and claimed match figures of five for 92 with the ball, which not only earned him the player of the match award but significant gains in the latest rankings.

In the batting table, Curran has jumped from 152nd to 72nd, the bowling table has seen him rise 49 places to 62nd, while in the all-rounders' category, he now sits in 37th position after jumping 58 places.