Shardul Thakur: Palghar Express is set for departure to the Caribbean

Shardul Thakur has led the Mumbai side with aplomb and his figures this Ranji Trophy season are staggering, 41 wickets in 11 matches — the highest wicket-taker for Mumbai. (Photo: Rajesh Jadav/DC)

Mumbai: Am I good enough?’ A certain amount of self-doubt clouded his sensibilities as he fired in to bowl the opening delivery while making his first class debut against Rajasthan in Jaipur on November 9, 2012.

However, all that is now a thing of the past. After receiving his maiden call to play for Team India, Mumbai’s speed gun Shardul Thakur now finds himself in the company of Ishant Sharma, Mohammed Shami, Bhuvneshwar Kumar and Umesh Yadav. In whites, the speedsters will be part of the pace bowling unit that will face West Indies in their backyard in July-August.

Read: Virat Kohli rested for Zimbabwe, MS Dhoni to lead the side

Shardul has led the Mumbai side with aplomb and his figures this Ranji Trophy season are staggering, 41 wickets in 11 matches — the highest wicket-taker for Mumbai. Like every other young, aspiring cricketer, his dream was to play for India. “I was hoping for the call but wasn’t expecting much,” says Shardul, sitting comfortably in his bermuda shorts, for this interview.

He had no exposure to school cricket till class VIII when he was studying in Anand Ashram English High School in Palghar, a city on the outskirts of Mumbai. But he was quite a brat then. “I used to be mischievious and once made a Brahmin eat egg in school,” he says. 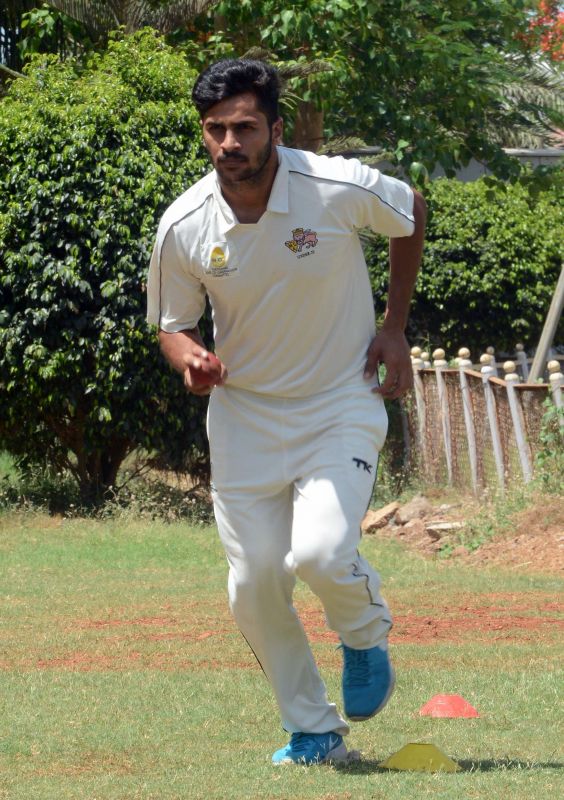 Shardul Thakur has been training continuously in the nets keeping fitness as his main concentration. (Photo: Rajesh Jadhav/DC)

In his ninth standard, Shardul switched to another school in a different town, again on the city’s outskirts, because ‘that was the only school that used to play in Harris Shield and Giles Shield tournaments’. That’s where Dinesh Lad, his bowling mentor, spotted him playing an inter-school match.

Life was not a smooth pitch for Shardul. At 13, he used to travel 110 km to attend his cricket coaching sessions. Add to that, his massive kit bag didn’t make the journey any easier. There were times when he would carry his kit over his head, and sometimes the sight was enough to make kind Mumbaikars offer him a hand — a gesture, he says he’ll always be grateful for.

I had to catch the 5.15 am train from Palghar. So I would leave home at 4.30, come to the station and wait for the train. The day used to be very long but I was ready to do it,” Shardul, who now lives in Mumbai city.

Check out: Schedule: India tour of West Indies in July

The excruciatingly long journey would play heavily on his young mind those days. “I used to feel bad when my friends went out for a movie or on a picnic and I couldn’t go because of my cricket schedule,” he recalls. Now, of course he is happy with where those hard days have led him. “Else, I wouldn’t have achieved my goal,” he says.

Commuting was not his only hurdle. In fact, ‘The Palghar Express’, as he is known in the Mumbai cricket circle, was dropped from the city’s under-19 squad for being overweight. At 5 feet, 9 inches, he weighed 83 kilos. Even Sachin Tendulkar had told him then that he needed to lose some weight if he were to get serious about cricket.

He told me that you have the talent to represent Mumbai in Ranji Trophy and if you work hard you will play for India A and India. He stressed that I needed to improve my fitness,” Shardul recalls. Mumbai cricketer Abhishek Nayar, his closest friend motivated him during that dreadful period, and even Zaheer Khan and Wasim Jaffer gave him a pep talk.

The advice seems to have handsomely paid off. Fitter and leaner, the rookie, who now hovers around 135 kmph to 140, upped his game and picked up 27 wickets in six Ranji Trophy matches in 2013-14 and 48 in 10 games in 2014-15. Moreover, he also featured in India A team last year against Australia and South Africa A teams and Board President’s XI against the South African Test side earlier this year.

“I improved my fitness levels. I kept developing my skill levels in bowling. Whenever I am practicing, I try to get the batsman out, to think out a batsman,” he said.

With major improvements in his bowling, a call to play for Team India didn’t seem like a distant dream. The day was certainly a memorable one but celebrations remained low key as only a couple of weeks ago, his maternal uncle passed away. “When I got the call, I was speechless. Then I called my dad and my coach. My phone was ringing off the hook. But celebrations were muted because of my uncle’s demise. My friends were home and we cut a cake,” he says.

It’s been just over a week but life changed instantaneously. “I have been getting calls from all corners. Followers on Twitter have increased too,” he adds with a smile. 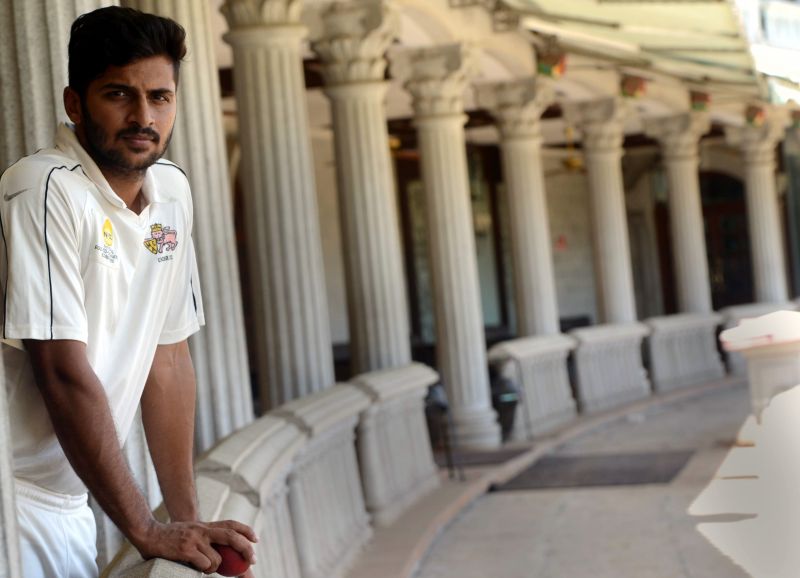 Shardul Thakur has a long way to go but in Mumbai circles, he has surely left a mark. (Photo: Rajesh Jadhav/DC)

Shardul’s tale is one that talks about facing the vigour of life with valour. Now, although he faces a tough task to make his way into the playing XI in the Caribbean, he’s determined to give it his best shot. “I will get popular very soon when I play for India,” he signs off.