Celebrity Clasico: Kohli, Dhoni give pads a break, it's a draw

It was a sight to watch Virat Kohli, this time, not with gloves and pads, but with football studs and a captain’s arm band along with MS Dhoni showing off their skills in the beautiful game. (Photo: PTI)

Mumbai: It was a treat to watch cricket stars battle it out on the football field will Bollywood celebrities as Virat Kohli’s Virat Kohli‘s All Hearts Football Club (AHFC) were held to a 2-2 draw against Abhishek Bachchan‘s All Stars Football Club (ASFC), in the Celebrity Classico at the Andheri sports Complex in Mumbai on Saturday.

The match, which was for charity for both Kohli and junior Bachchans’s trusts, drew scores of fans and was indeed an exciting one. 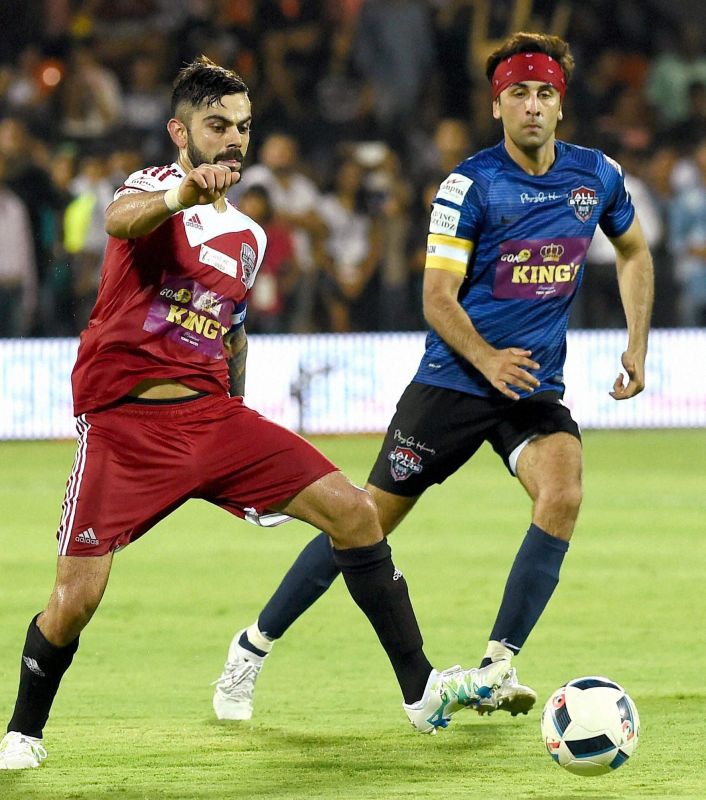 It was ASFC, who found the next first with ace director Shoojit Sircar scoring a brilliant goal through a header. B-Town went ahead with a two goal advantage in the first half.

But then AHFC came back strongly in the second half, with a lucky goal from Yuvraj Singh, after a mix-up from the opposition near the goal.

Watch: When Kohli was asked to wear his underwear outside

The final goal came from cricketer KL Rahul, who blasted a powerful shot inside the box. The match ended in a draw with both teams registering two goals each. 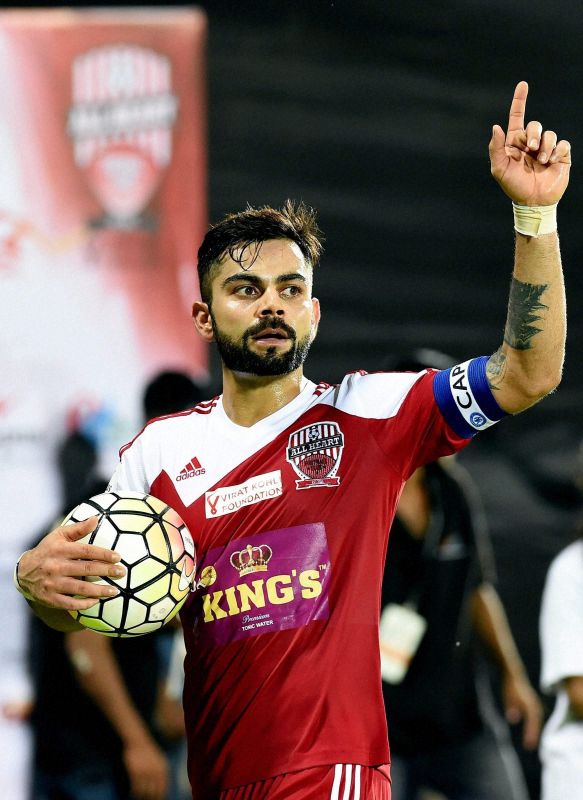 Virat Kohli was very agressive on the field. (Photo: PTI)

It was a sight to watch Kohli, this time, not with gloves and pads, but with football studs and a captain’s arm band along with Dhoni showing off their skills in the beautiful game.

Kohli alongside Dhoni were part of the AHFC, and took on All Stars Football Club, which featured the likes Ranbir Kapoor, Sidharth Malhotra, Arjun Kapoor and others. RK was the skipper of ASFC. 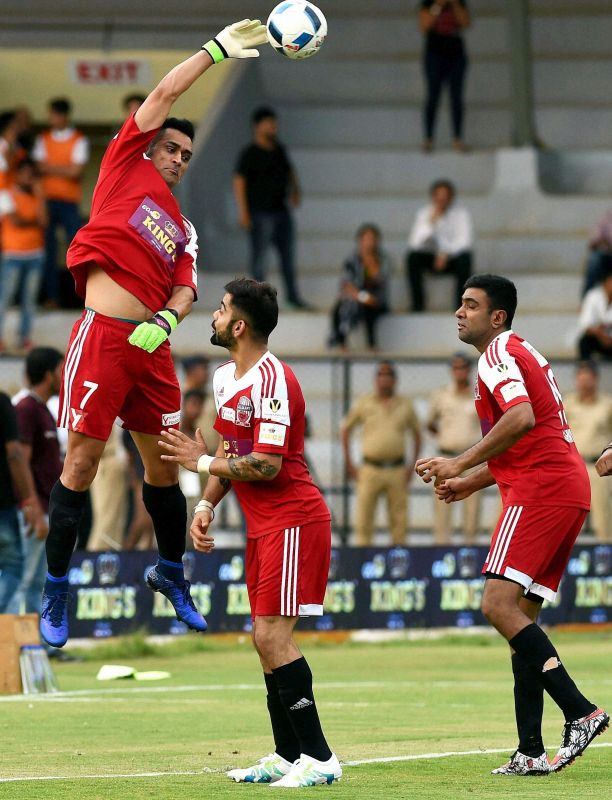 MS Dhoni too was in the action. (Photo: PTI)

Kohli has been a known figure even in the world of football. Earlier, Tottenham Hotspur striker Harry Kane praised Kohli for his stupendous performance against Australia in the ICC World T20 2016. 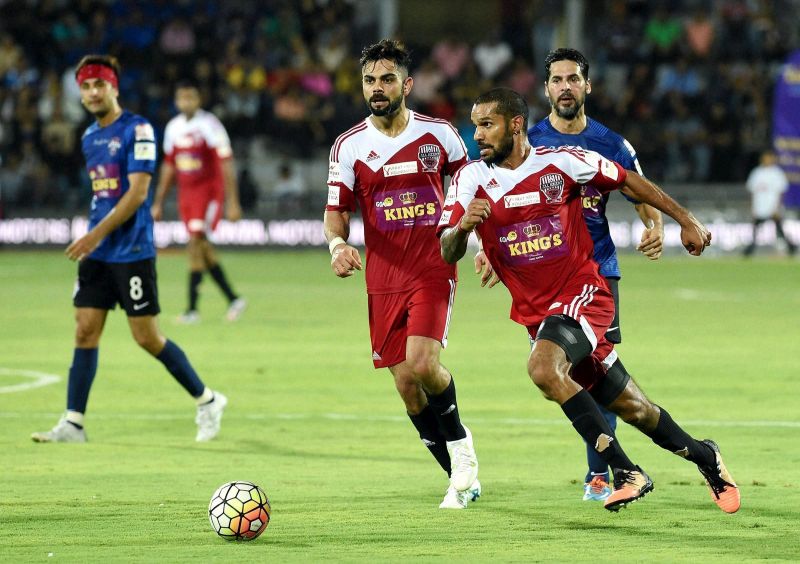 It was a treat to watch Virat Kohli and Shikhar Dhawan showing off their skills in football. (Photo: PTI)

Kohli has had a brilliant season lately. In the recently concluded IPL, the Royal Challengers Bangalore skipper scored a staggering 973 runs from 16 games, which included four centuries and seven half-centuries. 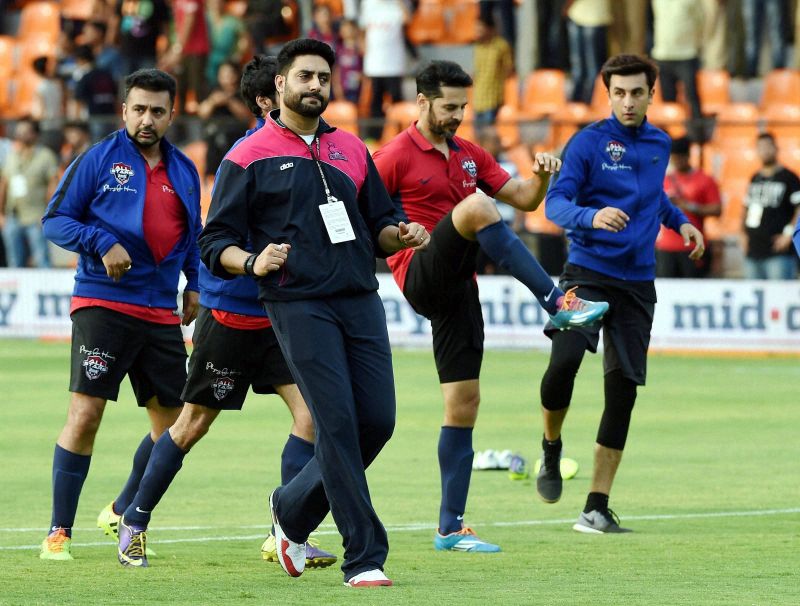 Bollywood stars gave the Indian cricketers a run for their money. (Photo: PTI)

He became the highest run-scorer in an single IPL campaign but Kohli was unable to guide RCB to their maiden IPL title as Sunrisers Hyderabad beat them by 8 runs in the summit clash.

India’s Test skipper now will next be seen in whites when Team India leave for the Caribbean, which will begin with a warm-up game on July 9.

Check out: Schedule: India tour of West Indies in July

Abhishek, Virat, Ranbir and Dhoni battle it out on the field