Hardik Pandya, who has clearly been enjoying his stay in the Caribbean islands, even posted a few photos of himself on social media.(Photo: AFP)

North Sound: Virat Kohli and co, who are currently touring the West Indies, are having a fantastic time both on and off the field at the Caribbean.

Last Tuesday, before their 3rd One Day International, the Men in Blue were seen cooling off in the blue waters of Antigua, enjoying themselves, as they played a little beach volleyball, and went on a Jetski ride among other activities.

Hardik Pandya, who has clearly been enjoying his stay in the Caribbean islands, even posted a few photos of himself on social media.

Indian squash player Dipika Pallikal, who is also married to Team India cricketer Dinesh Karthik, posted a photo of herself enjoying a quiet dip in a pool, overlooking the clear blow ocean.

Travelling with the husband can be a tough job! #antigua

Pandya seemed intrigued by the serenity depicted in the picture, and enquired about the location of the pool, to which, the ace Indian squash player promptly invited him over for some lemonade.

Here’s how the conversation read. 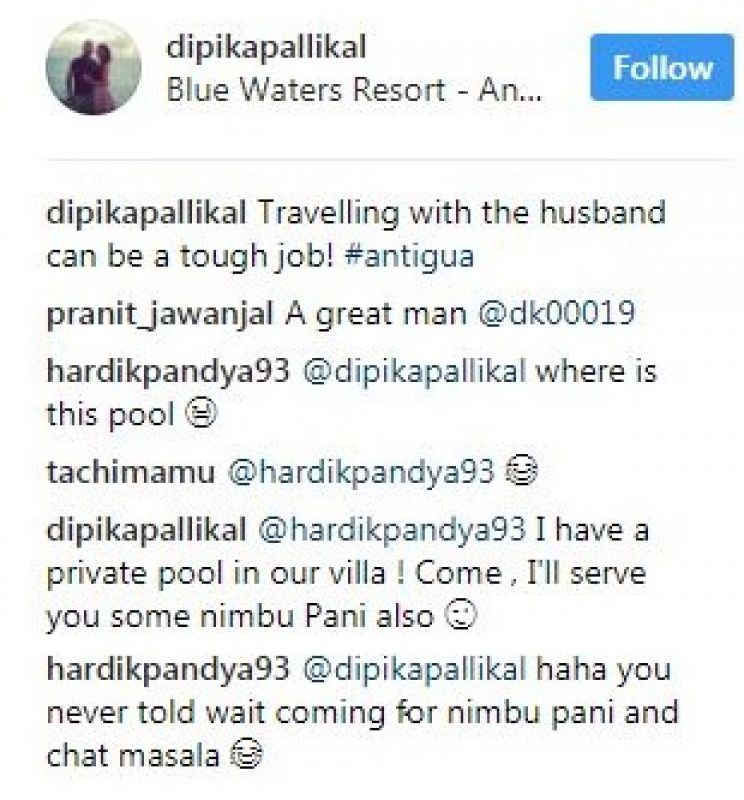 India are all set to square off against the West Indies in the fifth and final ODI against West Indies on Thursday, a match that will decide the outcome of the series, which the visitors currently lead 2-1.

■Video: Jetskis, volleyball and blue water; Virat Kohli and co make most of day off