Mumbai: Virat Kohli Foundation has joined hands with Smile Foundation, a national level development organization, which benefits approximately 4 lakh children and their families, to support the cause of empowerment of underprivileged Children and Youth. 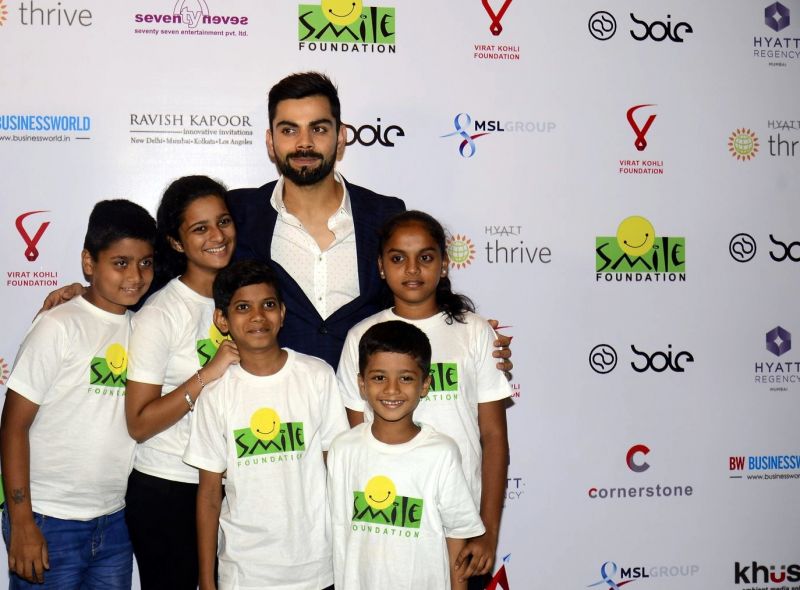 Virat Kohli shares a picture with kids from Smile Foundation.

Virat Kohli was dressed to the T. 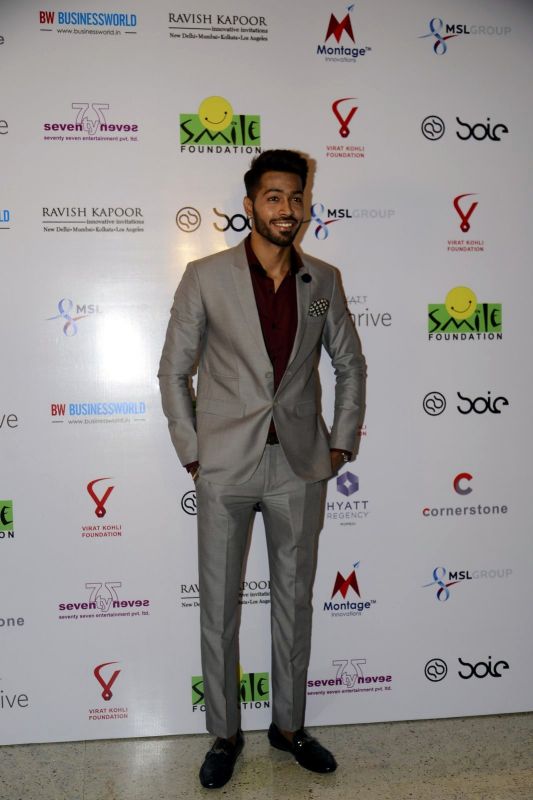 Team India cricketer Hardik Pandya looked dapper as he didn't hesitate posing for the photographers at the do. 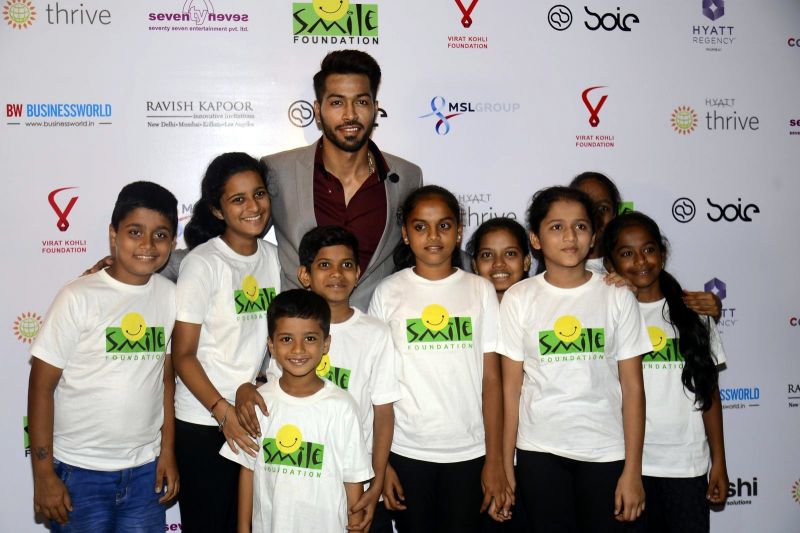 Hardik Pandya shares a picture with kids from Smile Foundation.

As a first step towards this endeavour, Virat hosted a one-of-its-kind charity dinner at a city hotel here on Friday for 200 influencers and was joined by his colleagues Mahendra Singh Dhoni, Shikhar Dhawan, Yuvraj Singh, Ajinkya Rahane, KL Rahul to support the cause of children and youth empowerment. 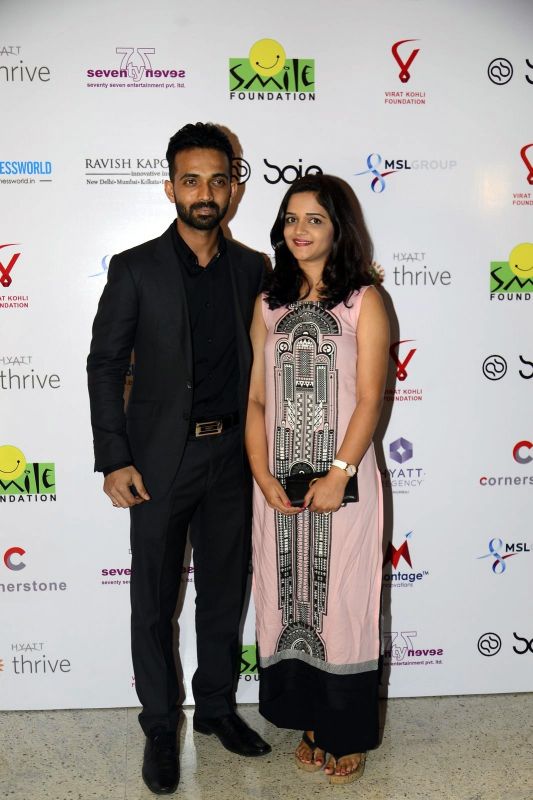 Ajinkya Rahane with wife Radhika pose for the shutterbugs before the event. 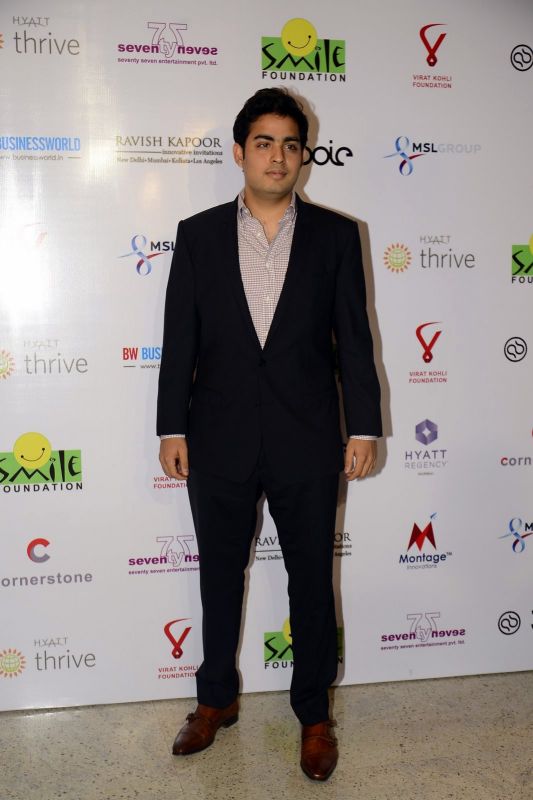 Talking at the event, Kohli said, “The soul behind this initiative is to raise awareness and support for the cause of education and skill training for the thousands of less privileged children and youth in India. I am glad to see the support that has come from all corners towards this initiative and this is just a humble beginning to spread smiles amongst the kids and youth. 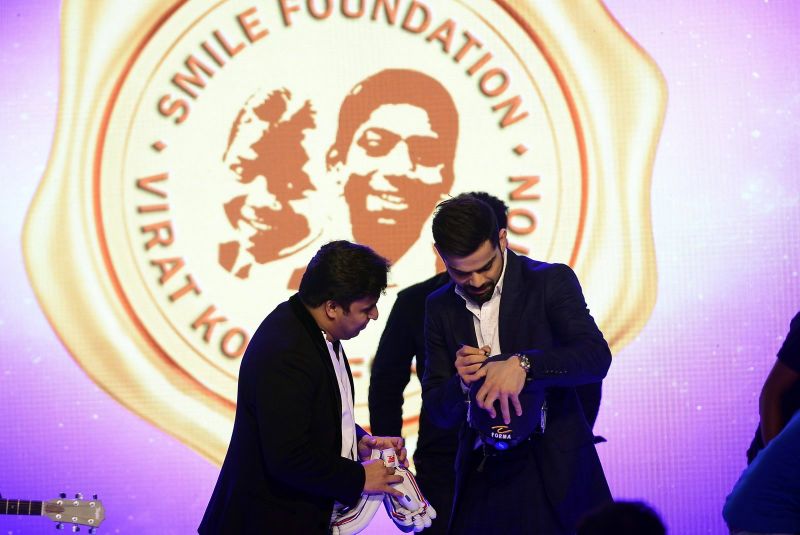 Virat Kohli was busy signing cricket memorabilia which was auctioned during the event.

As a public personality, I realise that I have a huge responsibility on my shoulder to support causes that matter to the society the most and I am glad that my foundation – Virat Kohli Foundation has joined hands with Smile Foundation towards this endeavour.” 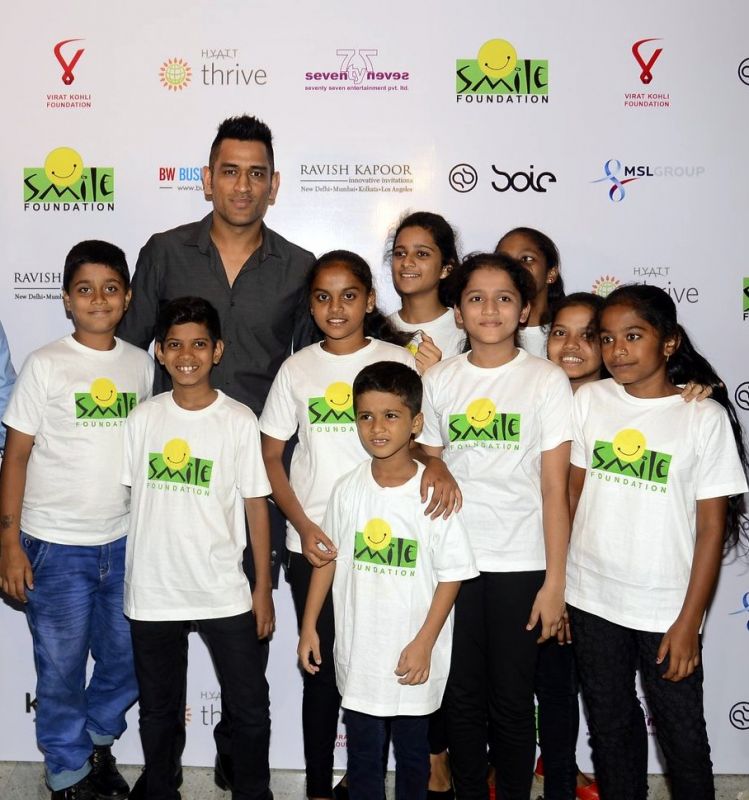 MS Dhoni also didn't miss the chance to share a picture with the kids from Smile Foundation.

The fund raiser also witnessed an auction of few of the high end luxury products and cricket memorabilia close to the heart of star batsman and his cricket friends. 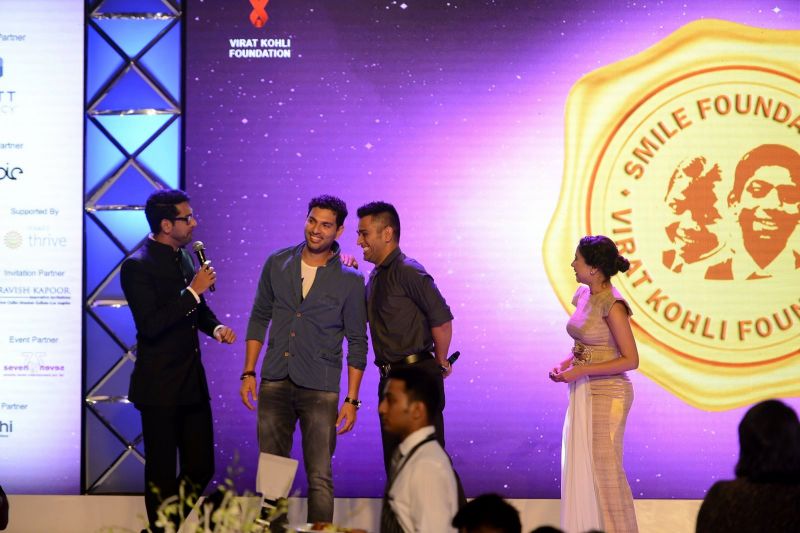 Yuvraj Singh and MS Dhoni were all smiles during the event. 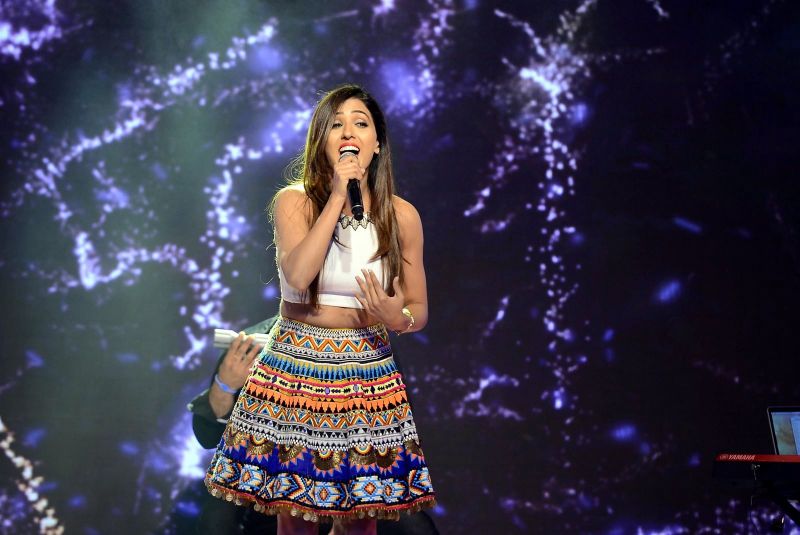 The amount raised will help to support the empowerment of underprivileged Children and Youth. The auction was conducted by Malcolm Todywalla from Todywalla Auctions and the event was anchored by Ridhima Pathak and Karan Ambardar. 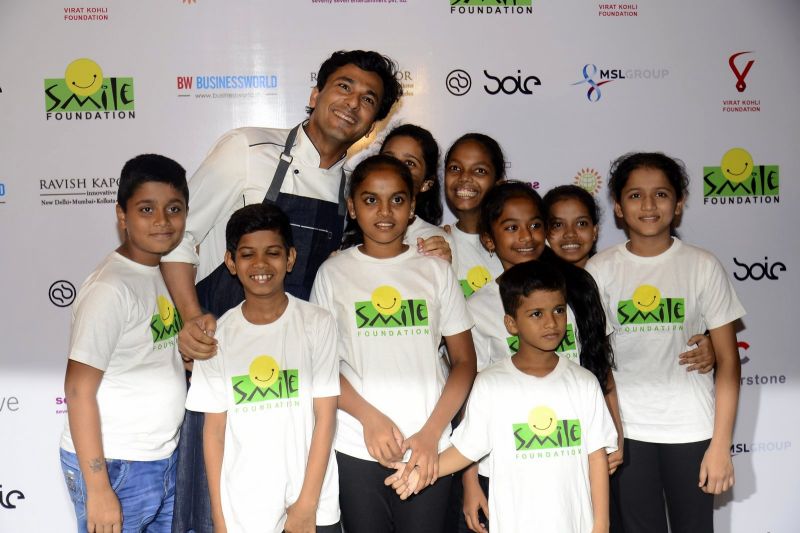 Vikas Khanna added his own flavours to the spread along with the chefs from the hotel and he has been advocating the cause of nutrition for a long time. 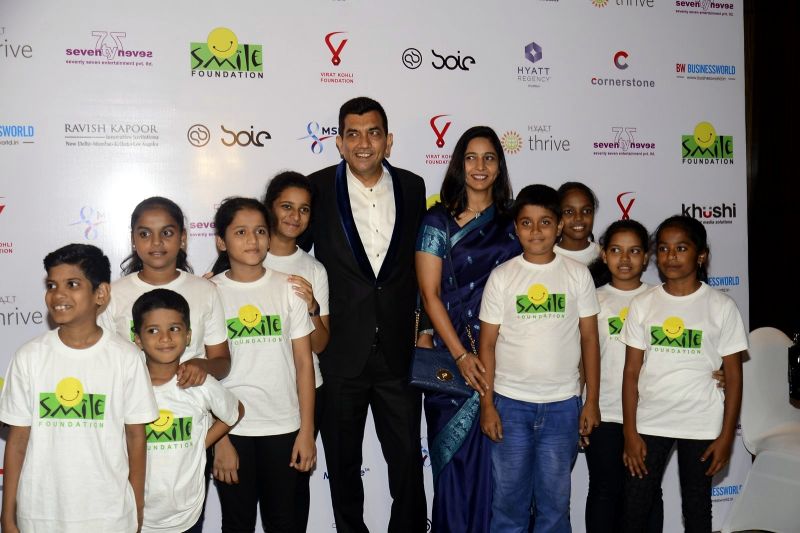 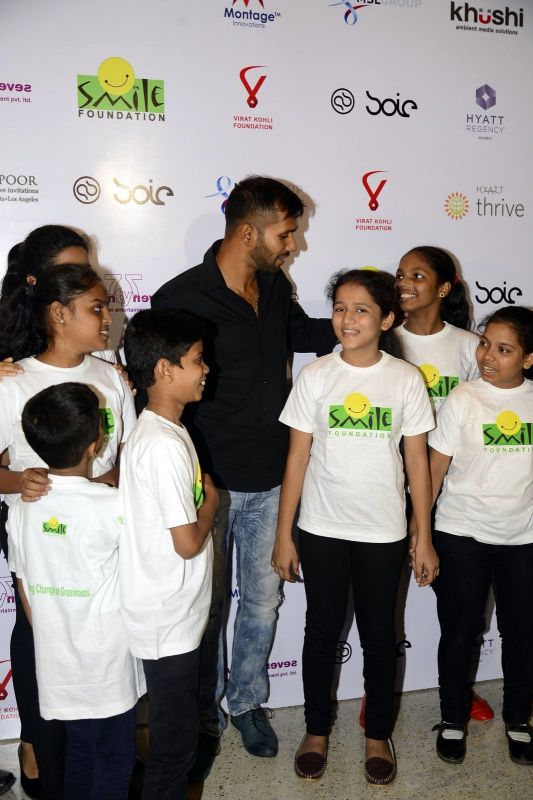 Cricketer Ashok Dinda was also seen enjoying his time with the kids.

Chef Khanna, Global Ambassador for Smile Foundation’s Nutrition Campaign and 5 times Michelin starred Chef said, “I have a family of 20,500 kids with Smile Foundation who are no less that my own and when I was asked to come forward and cook for this dinner there was an immediate yes though I was cooking almost after 20 years in India. 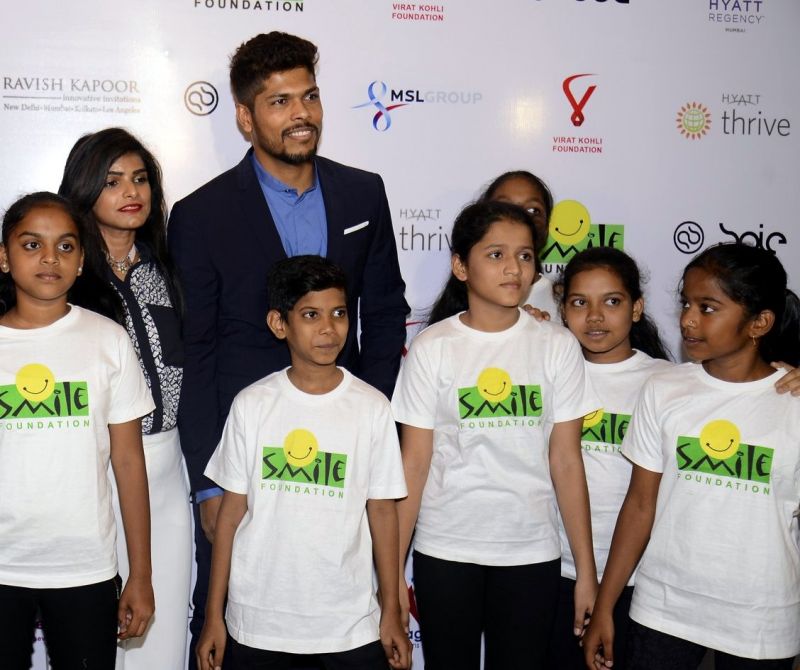 Umesh Yadav along with wife Tanya Wadhwa pose for pictures.

I am happy that people from all walks of life have come forward to support us for this event and help us raise resources for the cause. I appreciate Virat Kohli and his friends who took out time to make this event a huge success and put smiles on many children’s faces.” 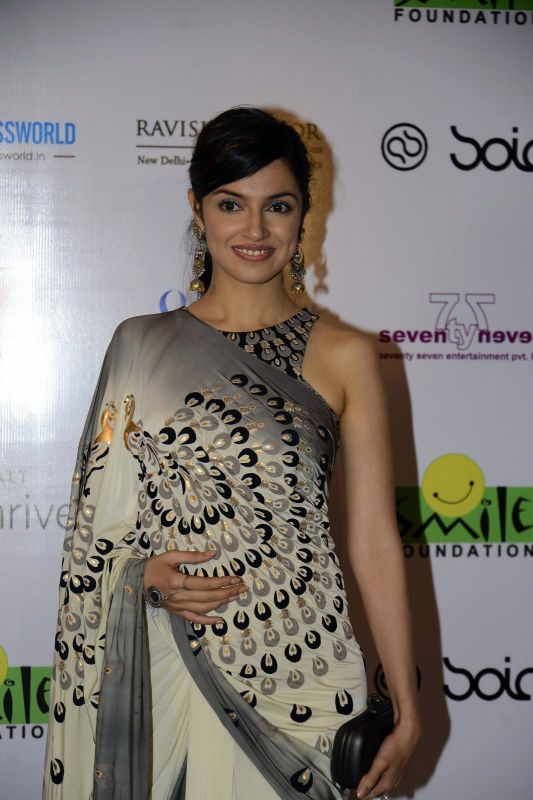