The play was halted for 17 minutes in the post-lunch session after visiting players, led by their skipper Dinesh Chandimal, wanted to leave the field of play complaining of severe pollution. (Photo: BCCI) 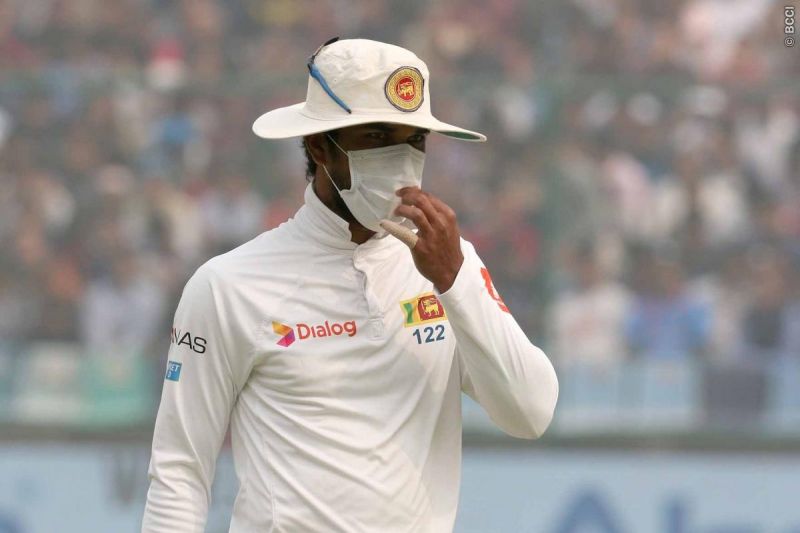 Many of Sri Lanka's fielders returned from lunch on the second day of the Test against India wearing masks amid visible haze at the Feroz Shah Kotla stadium.

Is this a first? Sri Lankan cricketers were wearing masks on the field during the 3rd #INDvSL Test match in Delhi, India. #Smog #Pollution pic.twitter.com/Ebhs1ZeE6t

The play was halted for 17 minutes in the post-lunch session after visiting players, led by their skipper Dinesh Chandimal, wanted to leave the field of play complaining of severe pollution.

Possibly the weirdest set of events in a Cricket match. Play stopped for 15 mins due to the smog in Delhi and a wicket falls the first ball after the break. pic.twitter.com/R9pMftlniN

The match was halted as the umpires consulted the match referee, team doctors and physiotherapists before deciding to resume play.

The Lankans were seen wearing anti-pollution masks during the post-lunch session. The play was halted between 12:32 pm to 12:49 pm after which the umpires and match referee David Boon convinced them to continue. 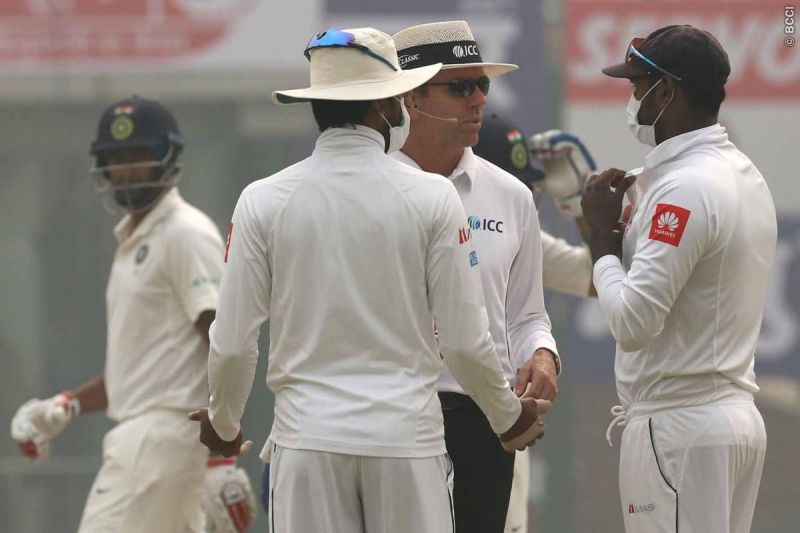 However, there was another stoppage of play in the 127th over when Suranga Lakmal walked off the field after bowling the fifth ball. The umpires once again got together, chatting with Chandimal and Angelo Mathews. Sri Lanka manager Asanka Gurusinha and India coach Ravi Shastri also joined in.

Dilruwan Perera finished the over and Sandakan bowled the next before Chandimal stopped play because there were only 10 Sri Lankans on the field. Kohli then decided to declare India's first innings at 536/7d in 127.5 overs. Earlier, it was in the 123rd over being bowled by pacer Lahiru Gamage that play was stopped. Gamage was about to bowl his fourth delivery and he stopped in his stride complaining of uneasiness. 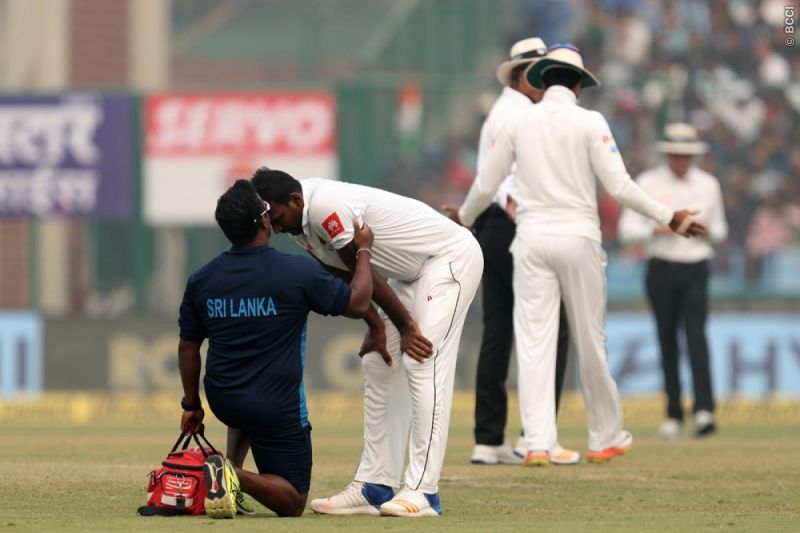 Chandimal walked up to the on-field umpires Joel Wilson and Nigel Llong to complain about the poor air quality, complaining that his fast bowler was finding it difficult to breathe. 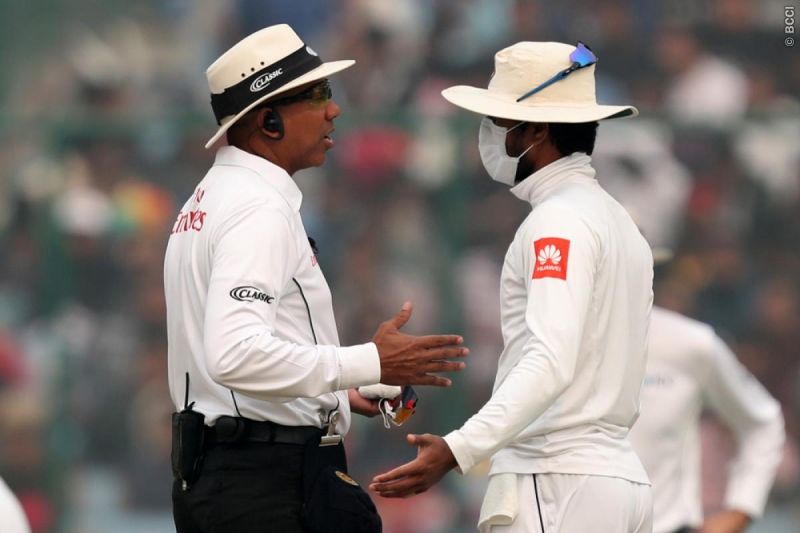 The light had also worsened due to the pollution and it was evident that an already battered Sri Lankan team wanted an opportunity to leave the field. Skipper Virat Kohli, who was dismissed for 243 after the proceedings resumed, was in no mood to leave the field and lay down on the ground to take a break. 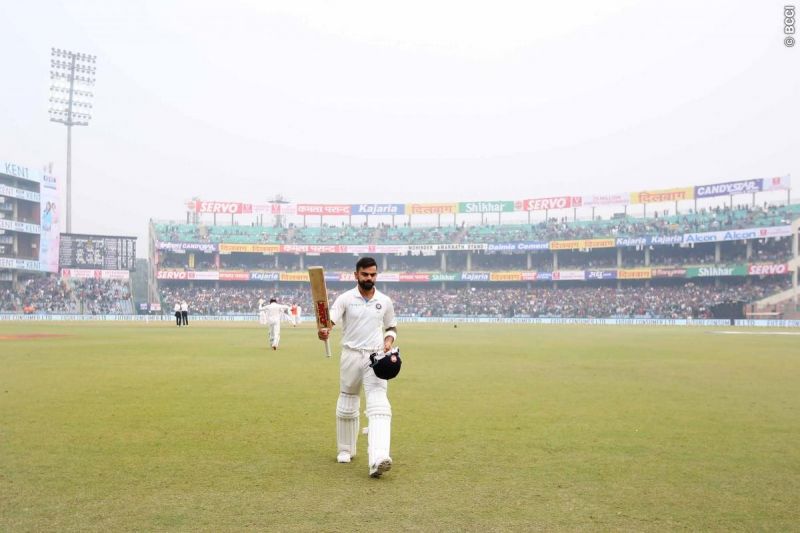 It was not clear as to why Gamage was again given the 125th over when he again felt uneasy and was taken off the field with Suranga Lakmal completing the over. 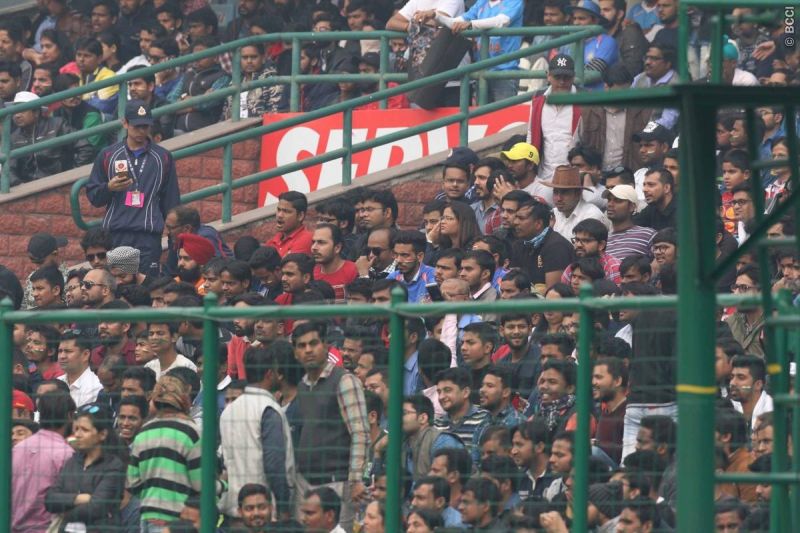 Smog is a very common phenomenon in Delhi as farmers in the adjoining states of Punjab and Haryana burn crops during the end of October and November.

However, smog, over the years, has been prevalent during the first two weeks of November. The BCCI has never been forced to shift the venue of a Test match as the air quality improves during the month of December.

A smog outbreak last month in the Indian capital -- an incident described by doctors as a public health emergency -- saw schools shut for days as pollution soared to 40 times the safe WHO levels.

Delhi's air quality typically worsens in winter as cooler air traps pollutants near the ground, preventing them from dispersing into the atmosphere -- a phenomenon known as inversion.