Cricket commentary seems to be as much a talking point among fans as is the game. The ICC World Cup 2019’s commentary, too, has taken the limelight with Sanjay Manjarekar being called out for his biased commentary, as per the fans.

A few days ago, Manjrekar had made a comment about Dhoni, calling the latter “our” watchdog behind the stumps. And the use of that pronoun has left some fans angry, who believe that as a commentator, Sanjay can take no sides.

Aditya Kumar, a Sydney-based India-origin fan wrote a letter to the International Cricket Council (ICC) over the matter. “Hey ICC! Greetings from Sydney, Australia. A bit of feedback about Sanjay Manjrekar, on your commentary panel, for CWC: I find him utterly biased and very unprofessional, behind the mic. He also sounds full of himself. Other than that, great World Cup. Thanks (sic),” his letter reads. 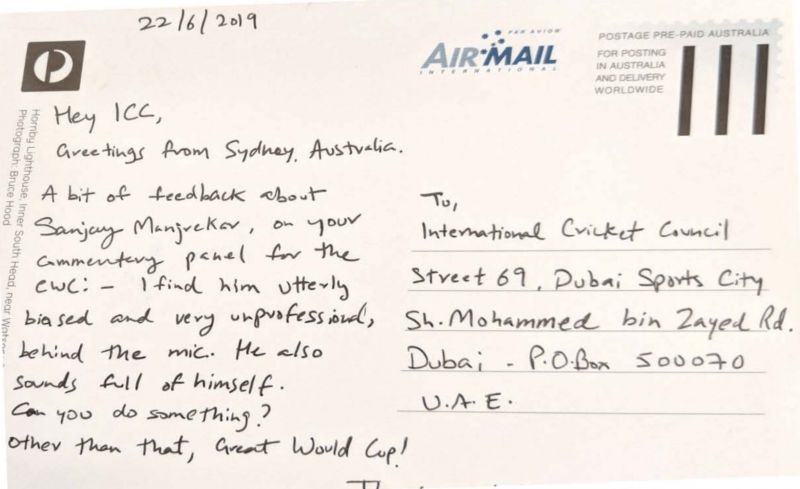 Aditya Kumar’s postcard to ICC addressing his concerns about the matter.

Speaking exclusively over telephone from Sydney, Aditya Kumar says, “I do not expect ICC will take this up; the whole idea behind this exercise, for me, was to prove a point that that as an audience I am quite fed up of the normalisation of this sort of degraded standard of cricket commentary over the years.”

Aditya says he spent 10 minutes when he wrote a postcard and posted it at the local post office. “I have not included my address (as it was a postcard.) So there may not be a way for them to reply.”

Aditya believes he’s seen a lot of support against biased commentators. “People have been quite vocal about their frustrations with biased commentary. The most surprising part is that most of them are Indians. This is surprising because Manjrekar (and commentators like him, like Rameez Raja) are biased and take sides for their countries. For commentators, there should be no ‘us’, or ‘our’, and in that respect, it is a great sign that audiences from their own countries are rejecting this,” he says.