Ind vs Eng: Injured Rohit out, Gambhir retained, Ishant back in squad

Mumbai: Gautam Gambhir retained his place in the Indian Test team while Ishant Sharma has made a comeback to the side for the first two Tests against England.

The surprise was the inclusion of Hardik Pandya. The Baroda all-rounder was the lone new face in the 15-man squad.

While KL Rahul, Shikhar Dhawan and Bhuvneshwar Kumar were left out due to fitness related issues, batsman Rohit Sharma was also out forced out by a thigh injury which might require surgery.

Veteran opener Gautam Gambhir was retained in the squad after scoring a half century in the Indore Test against New Zealand while Karun Nair is picked as the reserve batsman.

Jayant Yadav is the fourth spinner in the squad after Ravichandran Ashwin, Ravindra Jadeja and Amit Mishra.

The pace duo of Mohammed Shami and Umesh Yadav retained their places in the side. Ajinkya Rahane, Cheteshwar Pujara and Murali Vijay, on the other hand, were automatic inclusions. 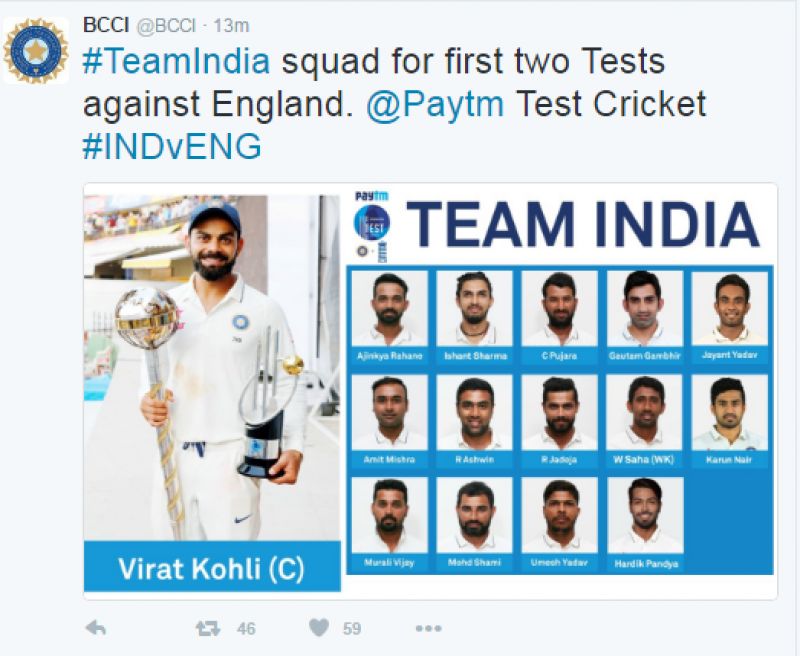 The selection committee chaired by MSK Prasad fielded maximum queries regarding Pandya's inclusion and he stated that his "all-round abilities" with a sea change in attitude after working under India A coach Rahul Dravid went in his favour.

"If you look at Hardik Pandya, his pace has increased. His overall personality has mellowed down. He did extremely well in the ODI series and also during the A tour Down Under," Prasad told the mediapersons.

Prasad admitted that Pandya is one of the few seamer all-rounders that India has at the moment.

"We all have been trying to find an all-rounder after Kapil Dev. In case we play three spinners, he can be the second seamer and also can bat," Prasad reasoned.

Asked about Pandya's attitude, Prasad said: "We all know he is a bit hyper. But he has worked hard under Rahul Dravid and under chief coach Anil Kumble."

About Karun, who was included as a standby in the final Test at Indore, Prasad said: "We have been grooming him (Karun Nair) for the last one or two years."

The chairman said Bhuvneshwar Kumar has recovered from his back injury but the selection committee wants the UP seamer to at least play a Ranji game and prove his match fitness. Ditto for KL Rahul (hamstring) and Shikhar Dhawan (finger fracture).

As far as Rohit is concerned, Prasad said: "Unfortunately we have all seen on TV that Rohit Sharma is badly injured. And there is scope of surgical intervention, there is a chance (that) he is going to be assessed in England. In case it is required he might have to undergo a surgery."

"(We are) definitely not (considering) him for the Test series. In case he does not require a surgical intervention, then 6-8 weeks (for recovery) and if it (surgery) is required then it could be more," Prasad said.

Moving away from convention for a home series, the selectors also named Ajinkya Rahane as the vice-captain to take charge of the team if and when captain Kohli leaves the field, Prasad said.

About retaining Gambhir, who was recalled to the Test squad in the series against New Zealand after a two-year absence, Prasad said the selectors thought very hard before including any player but once selected they want to give him "a fair chance".

"Yuvraj Singh was among those who was discussed," he said, replying to a query on why the seasoned left hand batsman's case was not considered after his recent good vein of form in the Ranji Trophy.

The national selection committee of the Board of Control for Cricket in India (BCCI) met in Mumbai on Wednesday to pick the Indian team for the upcoming Test series against England commencing from November 9.

The England squad is scheduled to arrive in Mumbai on Thursday from Bangladesh after drawing a two-Test rubber against the hosts.

England would depart for Rajkot on November 5, where the first Test will be played. The other Tests will be held in Vishakapatnam (November 17-21), Mohali (November 26-30), Mumbai (December 8-12) and Chennai (December 16-20).

While India thumped New Zealand, England is coming off a dismal tour of Bangladesh where they suffered a humiliating loss in the second and final Test.

Dhoni steps aside, hands over CSK captaincy to Jadeja