Thrilled after getting to know about Hardik Pandya and Natasa Stankovic's engagement, skipper Virat Kohli on Wednesday called it is a 'pleasant surprise'. (Photo:Instagram)

New Delhi: Thrilled after getting to know about Hardik Pandya and Natasa Stankovic's engagement, skipper Virat Kohli on Wednesday called it a "pleasant surprise".

Extending his best wishes to the newly-engaged couple, Kohli posted a comment on Pandya's Instagram post which read, "Congratulations H. What a pleasant surprise. Wish you guys great times ahead. God bless". 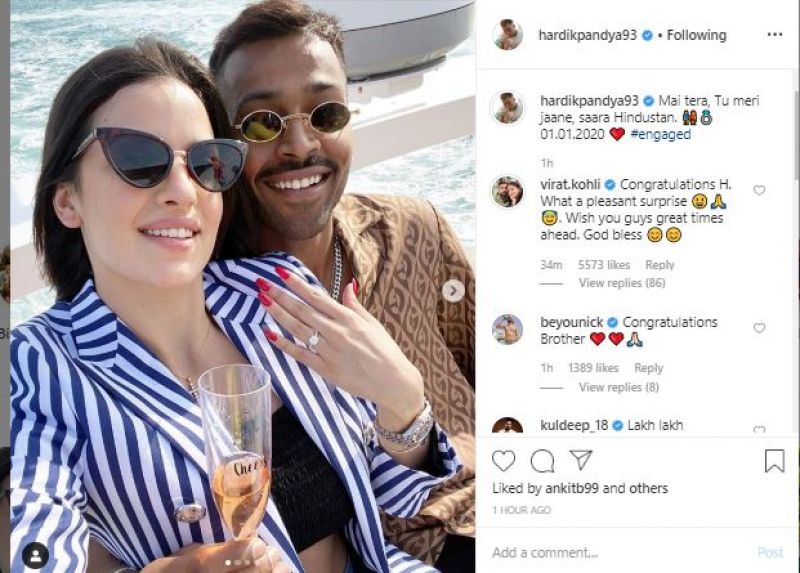 On the first day of the New Year 2020, Pandya announced his engagement with Serbian actor Natasa Stankovic.

The couple got engaged in Dubai and were seen taking a ferry ride along with close friends.

On the work front, Stankovic was last seen in a song from the Bollywood movie The Body starring Emraan Hashmi and Rishi Kapoor. She had also made it to the finals of the TV show Nach Baliye with her ex-boyfriend Aly Goni.

In 2019, the Board of Control for Cricket in India (BCCI) had confirmed that Pandya had had lower-back surgery in London.