While Virender Sehwag is making sure to clarify his stand, an old video of him praising Pakistan’s hospitality has gone viral. (Photo: AFP)

New Delhi: After Virender Sehwag’s tweet taking a dig at Gurmehar Kaur backfired, the former India cricketer has defended himself saying that his tweet was not an attempt to bully anyone over their opinion. Sehwag also added that everyone has a right to express their opinion and it was not a case of agreement or disagreement with anyone. While Sehwag is making sure to clarify his stand, an old video of him praising Pakistan’s hospitality has gone viral.

Sehwag wrote on Twitter, “My tweet was an attempt to be facetious rather than one to bully anyone over their opinion. Agreement or disagreement wasn't even a factor.”

Gurmehar was attacked on social media after she started a campaign against the Akhil Bharatiya Vidyarthi Parishad (ABVP) student body after the violence at Ramjas College in Delhi last week. She received a lot of flak for her previous message "Pakistan did not kill my dad, war killed him”.

On Sunday, Sehwag had taken to Twitter to post a photo, holding a placard which said "I did not score two triple centuries, my bat did". The former India opener was criticised after his tweet was taken as directly mocking Gurmehar’s video. 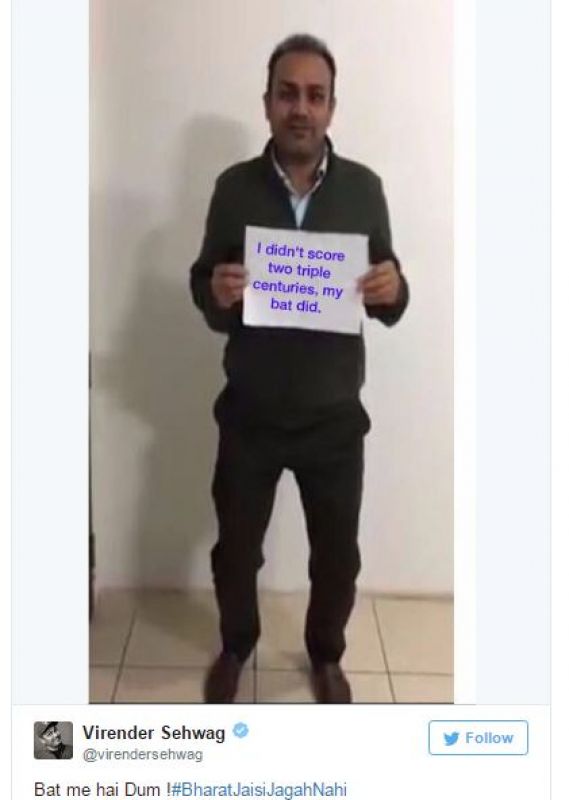 While Sehwag’s tweet was seen as a nationalist stand, a video of Sehwag, where he is fondly recalling his experiences in Pakistan, has gone viral on social media.

In the video, Sehwag could be seen recalling the great time Team India had in Pakistan to Shoaib Akhtar. The video was captioned: “I didn't praise Pakistan, the checque I received from Star Sports did.~ Virendra Sehwag (2017).”

I didn't praise Pakistan, the checque I received from Star Sports did.~ Virendra Sehwag (2017) pic.twitter.com/wIj18cWGus