Tim Paine's wife Bonnie put up a picture on her Instagram account which had the 21-year-old Pant holding the home captain's son during an event at the Australian Prime Minister Scott Morrison's residence. (Photo: Instagram / Bon Paine)

Sydney: Rishabh Pant might be the "baby" of the Indian cricket team but on New Year's Day, the wicketkeeper showed that he is good with babies, something that got an instant thumbs up from none other than Australian skipper Tim Paine's wife.

On Tuesday, Paine's wife Bonnie put up a picture on her Instagram account which had the 21-year-old Pant holding the home captain's son during an event at the Australian Prime Minister Scott Morrison's residence.

Bonnie, who herself posed in the picture, captioned it 'Best Babysitter' with a smiling Pant by her side. 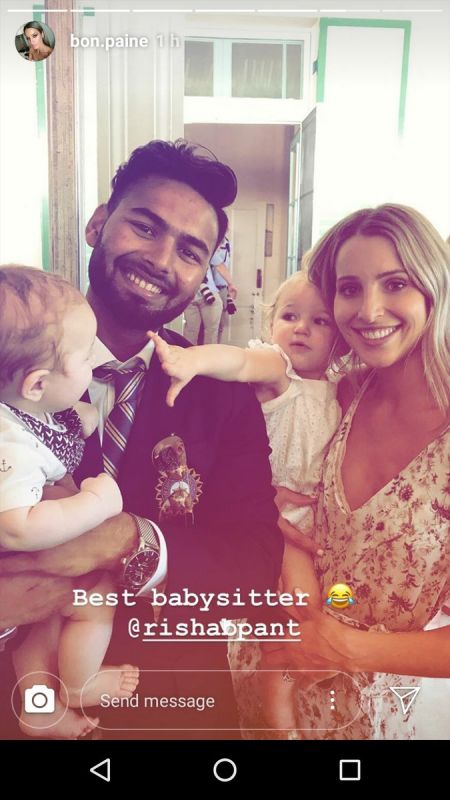 The reference came after Paine and Pant had a go at each other during the Melbourne Test match and the stump microphone recorded their enjoyable sledging.

While the Indian keeper was batting, Paine referred to his omission from the ODI side.

"Big MS (Dhoni) is back in the one-day squad too, we might get him (Pant) down to the (Hobart) Hurricanes… we need a batter. Fancy that, Pantsy? Extend your little Aussie holiday. Beautiful town Hobart too, I'll get you a nice apartment on the waterfront. (I'll) have him over for dinner. Can you babysit? I'll take the wife to the movies one night and you'll look after the kids," the Australian captain was heard saying on the stump mic.

Not sure George Bailey is sold on Tim Paine's @HurricanesBBL recruitment strategy 🤣 pic.twitter.com/do5V8UeecM

On the very next day, Pant was heard speaking to Mayank Agarwal when Paine came to the crease.

"We got a special guest today. Have you ever heard of a temporary captain, ever, Mayank?" Pant said.

It was Rishabh Pant's turn for some fun on the stump mic today... #AUSvIND pic.twitter.com/RS8I6kI55f

However, the picture of Pant with Paine's family is an indicator that the series has so far been played in good spirits.

Intensely on field, the two teams have on and off indulged in some good humoured banter without crossing the line.

■Watch: Heard of a temporary captain? Pant gives Tim Paine a taste of his own medicine

Boult fired up as New Zealand have India on the ropes

Which cruel feat/fate do Pragyan Ojha and Jason Gillespie share?