Kidambi Srikanth, B Sai Praneeth, and HS Prannoy have dished out some tremendous performances, taking the world of badminton by storm. (Photo: PTI)

Mumbai: Saina Nehwal and PV Sindhu have been the faces of Indian badminton for quite some time. Not only have the Olympic bronze and silver medallists, respectively, dominated the sport in the country, but they have also been among the top-ranked players in the world.

Till a few months back, it was safe to say that the women had been carrying the weight and expectations of the badminton fans from India.

That, however, is not the case anymore.

In the last couple of months, men’s singles shuttlers like Kidambi Srikanth, B Sai Praneeth and HS Prannoy have dished out some terrific performances, that have taken the world of badminton by storm.

Both Srikanth and Prannoy have been around in the badminton scene for a while, but were struggling with injury issues for the last couple of years. However, the dawn of 2017 so far has had something completely different in store for them.

It all started when both Srikanth and his compatriot Praneeth made it to the final of the Singapore Superseries.

Srikanth completed his comeback from injury with back-to-back victories in the Indonesia Open Superseries and the Australian Open, with performances that have propelled him to the top 10 spots.

This means that as many as 14 Indians are in the top 100 spots in the BWF men’s rankings, as opposed to just seven Indians in the 100 BWF women’s singles rankings. 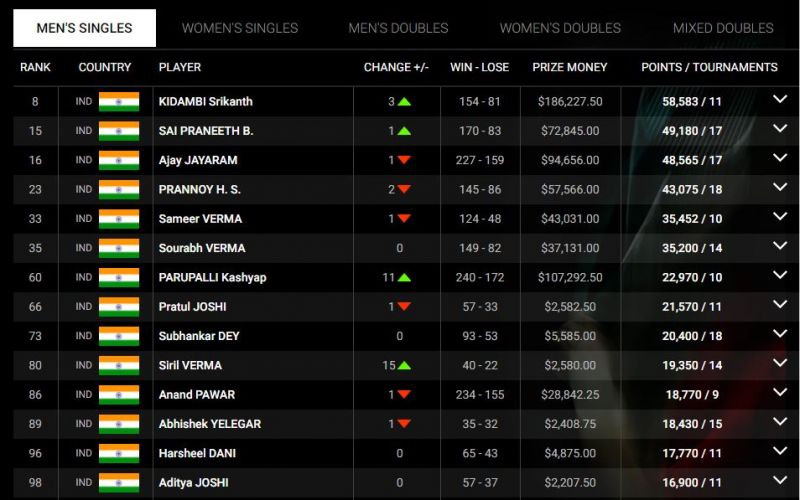 This makes India the country with the highest number of men’s singles players in the top 100 spots in the BWF rankings, followed by Indonesia with nine players; Denmark comes in at a close third with eight. China and Malaysia complete the top five with seven players each, in the top 100 of the of the BWF men’s singles rankings.

Chirag Shetty, Rankireddy hope to get a new foreign coach after Olympic postponement