In a first of its kind in international cricket an umpire was seen officiating with a helmet. Australian umpire John Ward wore the helmet during the fourth ODI between India and hosts Australia in Canberra on Wednesday. (Photo: BCCI)

The 53-year-old Ward was hit on the head while officiating a Ranji Trophy match between Tamil Nadu and Punjab in December last year and was hospitalised. He did not want to take any chance this time, with the likes of David Warner and Aaron Finch at the crease and decided to sport a helmet on to avoid any possible damage. (Photo: BCCI)

However, despite Ward’s protective efforts it was his colleague, Englishman Richard Kettleborough, who ended up in serious pain. Kettleborough was hit on the shin by a drive from Finch that ricochet off the finger of Indian paceman Ishant Sharma. After half an hour later the pain became too much and he limped off the field and was replaced by Australian umpire Paul Wilson. (Photo: Cricket Australia)

While there has been a lot of focus on safety of players during any match, especially after the sudden on-field demise of Australian batsman Phil Hughes in 2014, umpires are also taking up the matter seriously of wearing protective gears such as helmets under the scare to get hit with bats getting wider and meatier. (Photo: Cricket Australia)
Tags: australia vs india, canberra odi, umpire, helmet, john ward, barinder sran, paschim pathak, richard kettleborough, ranji trophy 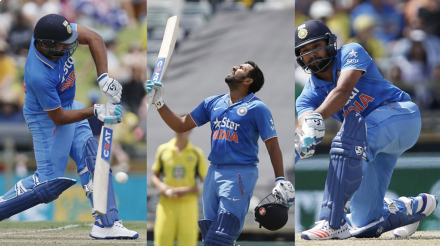