"It's incredible that it's my fifth," said the 28-year-old Barcelona and Argentina forward, who won four straight FIFA awards from 2009-12. (Photo: AP)

Messi earned his record-extending fifth after being runner-up to his great rival for the past two years. (Photo: AP)

"It's a very special moment for me to be back here on the stage," Messi said in Spanish in his acceptance speech, "after being there in the audience watching Cristiano win." (Photo: AP)

Five major titles for Barcelona last year - leaving none for Ronaldo's Real Madrid - brought the golden ball back into Messi's hands. It was not even close. (Photo: AP)

The women's awards were won by US captain Carli Lloyd and coach Jill Ellis. (Photo: AP)

Lloyd stood out by scoring six World Cup goals, including a stunning hat trick in the opening 16 minutes of a 5-2 rout of Japan in the final. (Photo: AP)

Lloyd got 35.28 per cent of the voting points, ahead of Germany's Celia Sasic with 12.6 per cent. Third-place Aya Miyama of Japan got 9.88 per cent. Sasic also scored six goals in Canada to win the tournament Golden Boot, then retired aged just 27. (Photo: AP) 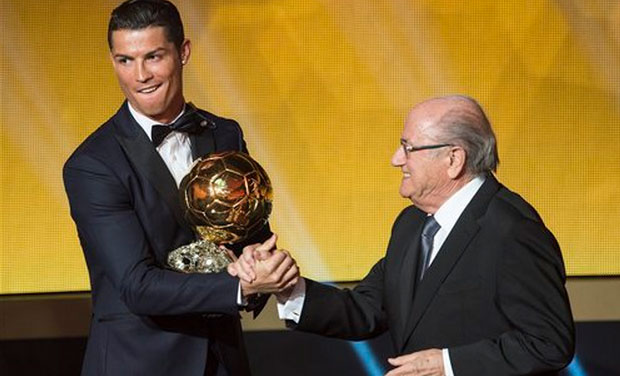