With the interest surrounding Sanjay Leela Bhansali’s Bajirao Mastani, author Ram Sivasankaran hopes for readers of his well-researched book Peshwa to delve more into the histories of unsung heroes and warriors. He wants them to read actual historical accounts, visit places and monuments associated with these individuals and spend some quality academic time in learning about our great heroes.

Ram’s historical novel revolves around the greatest and yet, to an extent, a lesser-known figure from Indian history — Bajirao Bhat, Peshwa of the Maratha confederacy, mighty warrior and strategist, hopeless romantic. The author spoke to us about the life and times of Peshwa Bajirao Bhat, and his book.

“I am from Chennai, moved abroad when I was five and have, over the years, lived in Oman (where I completed my schooling) and the US, where I live and work to this day. History has always been one of my favourite subjects. I’ve always loved conjuring up historical scenes, costumes, settings, courtrooms, moods, battles and romances. I read epics and classics as voraciously as I listened to stories narrated by my grandparents,” Ram says.

Sharing why he found the Peshwa’s story intriguing, Ram reveals, “I found the idea of battles, wars, campaigns, military strategy and the aftermath of those deeply interesting. I stumbled on to Bajirao in a roundabout way, while reading about the battle tactics of Napoleon Bonaparte and came across an article that compared him with Bajirao. Intrigued, I checked up on Bajirao and began to read about him obsessively. I realised that it was not Bajirao who deserved to be compared with Napoleon, but it was the other way round, for Bajirao was truly invincible. He brought the mighty Mughal Empire to its knees, humbled the Portuguese and established an era in which the power of the Peshwa even overshadowed that of the Chhatrapati.”

It took Ram about six months to write the book, a year of structuring the story and a few years of research. He says, “I finished writing the book in December 2013 and like many other avid moviegoers, I felt intrigued and excited when Bhansali made the movie on the same subject. But Bhansali’s work is his own, with his own artistic flavour.”

Explaining some of the facts he found while doing his research and those that he wrote about he says, “Peshwa Bajirao himself is compared with Napoleon Bonaparte, given his blitzkrieg battle tactics in expanding the Maratha Empire, often fighting battles on his own terms and overwhelming larger armies with ease.

In fact, he is credited to have fought many more battles than Napoleon. Bajirao was unstoppable in every sense. The Peshwa’s weapon of choice was something called the Dand Pata. It was a rigid gauntlet sword, worn over one’s fist and wrists, like something of a small lance.

Also, Bajirao’s rise to power was marked by a quick proclamation by Chhatrapati Shahu. He was neither asked to prove himself through any physical feat nor any intellectual test. It is inferred that the Bhat family of the Peshwas and the Bhosale family of the Maratha Emperor were on very good terms. 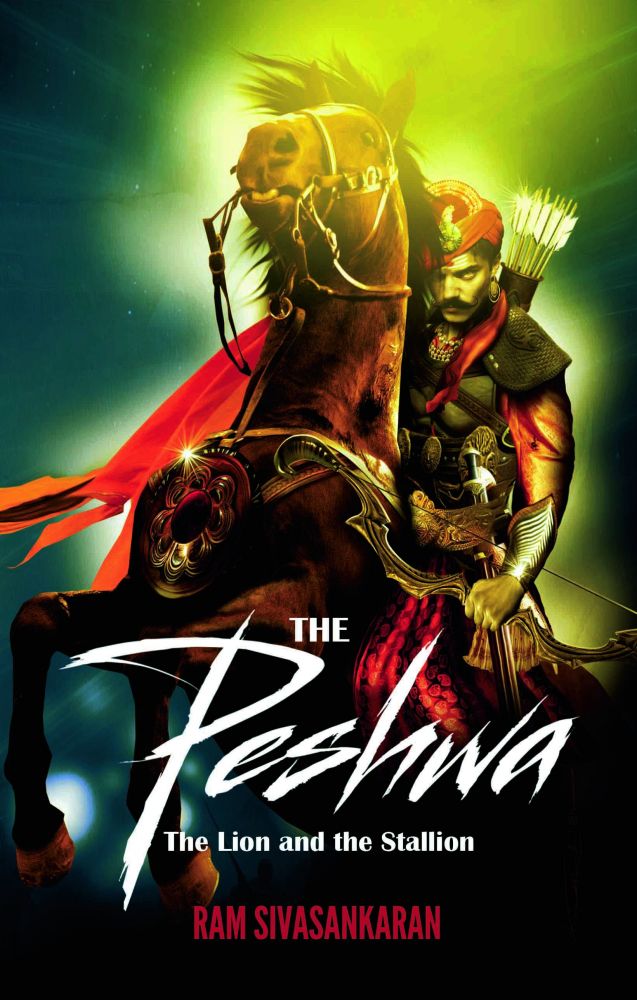 The Peshwa: the lion and the stallion by Ravi Sivasankaran Rs 228, pp. 356 Westland

The Chhatrapati had implicit faith in a barely 20-year-old Bajirao — so much faith so as to name him Peshwa immediately after the senior Bhat’s passing. Another interesting fact is that the Peshwa’s office remained with the Bhats to the ending days of the Maratha Empire.

In fact, even from Bajirao’s son’s (Nanasaheb) time, the Peshwas overshadowed the Chhatrapatis in power and became the true rulers of the Maratha domains. The Peshwa’s succession to his seat was easy enough but there was a brief but intense period of tumultuous turmoil within the Maratha Empire for there were many powerful men who wished to become Peshwa.

Bajirao owed much of his success during his fledgling years to the unquestioning loyalty of two heavyweight Maratha sardars — Malharrao Holkar and Ranoji Scindia (father of the famed and powerful Mahadji Scindia). After crushing the Mughal nemesis, Bajirao was wed to Mastani, Chhatrasal’s daughter through a Muslim wife.

This is seen as a progressive move for those days as Bajirao, a staunch Brahmin, married outside his religion. Chhatrasal then gave away half the kingdom of Bundelkhand to Bajirao but the Peshwa had no interest in such things. He passed over the lands to Govind Pant, who ruled it until the Third Battle of Panipat.”

The book’s storyline marks Bajirao’s rise to power. So, what will Ram write about next? “I have quite a few works lined up and hope to write on Krishnadeva Raya of Vijayanagara, Rana Kumbha of Mewar, Rana Sanga of Mewar, Rajendra Chola of the Chola Empire and even Chhatrapati Shivaji himself. There will be more treachery, romance, warfare, and betrayal. New heroes will rise and old ones may fall. It is the conclusion to an illustrious warrior’s life story.”