The image above is a map that was created by using the Potential Field Source Surface (PFSS) model. The model is of the magnetic field in the Sun’s atmosphere, based on magnetic measurements of the solar surface.

NASA showed off the Sun’s magnificent magnetic field via an illustration which depicts the complex overlay of lines that can teach scientists about the ways the Sun’s magnetism changes respond to the constant movement on and inside it. NASA stresses no how the magnetic fields are densest near the bright spots visible on the Sun. these spots are magnetically strong active regions and many of the field lines link one active region to another. 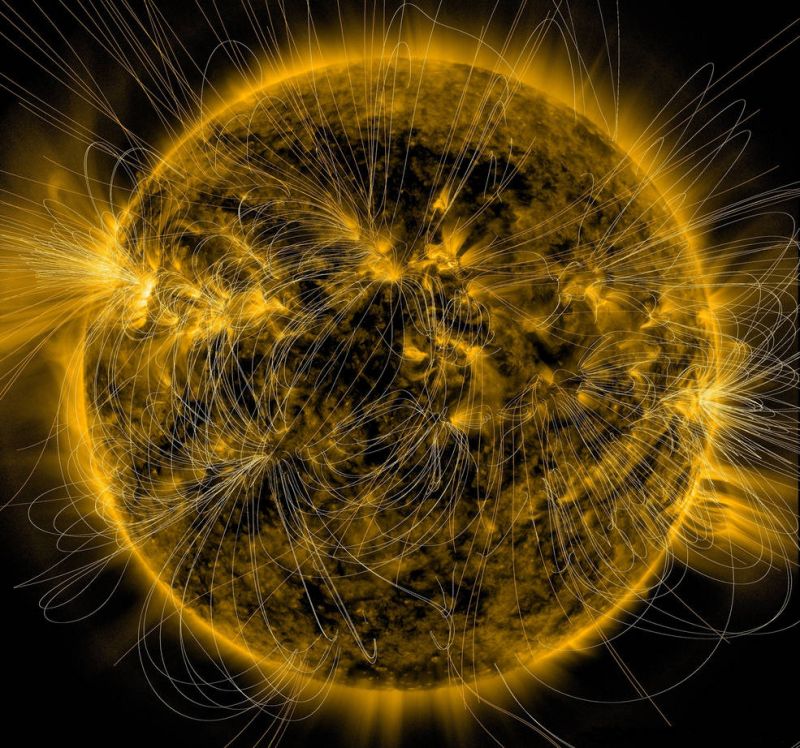 The image above is a map that was created by using the Potential Field Source Surface (PFSS) model. The model is of the magnetic field in the Sun’s atmosphere, based on magnetic measurements of the solar surface.

The underlying image was taken in extreme ultraviolet wavelengths of 171 angstroms. Coloured in gold in the image, this type of light is invisible to human eyes.

The surface of the sun writhes and dances. Far from the still, whitish-yellow disk it appears to be from the ground, the sun sports twisting, towering loops and swirling cyclones that reach into the solar upper atmosphere, the million-degree corona – but these cannot be seen in visible light. Then, in the 1950s, we got our first glimpse of this balletic solar material, which emits light only in wavelengths invisible to our eyes.

Once this dynamic system was spotted, the next step was to understand what caused it. For this, scientists have turned to a combination of real time observations and computer simulations to best analyze how material courses through the corona. We know that the answers lie in the fact that the sun is a giant magnetic star, made of material that moves in concert with the laws of electromagnetism.

“We’re not sure exactly where in the sun the magnetic field is created,” said Dean Pesnell, a space scientist at NASA’s Goddard Space Flight Center in Greenbelt, Maryland. “It could be close to the solar surface or deep inside the sun – or over a wide range of depths.”

Getting a handle on what drives that magnetic system is crucial for understanding the nature of space throughout the solar system: The sun's magnetic field is responsible for everything from the solar explosions that cause space weather on Earth – such as auroras – to the interplanetary magnetic field and radiation through which our spacecraft journeying around the solar system must travel.

This comparison shows the relative complexity of the solar magnetic field between January 2011 (left) and July 2014. In January 2011, three years after solar minimum, the field is still relatively simple, with open field lines concentrated near the poles. At solar maximum, in July 2014, the structure is much more complex, with closed and open field lines poking out all over – ideal conditions for solar explosions.

So how do we even see these invisible fields? First, we observe the material on the sun. The sun is made of plasma, a gas-like state of matter in which electrons and ions have separated, creating a super-hot mix of charged particles. When charged particles move, they naturally create magnetic fields, which in turn have an additional effect on how the particles move. The plasma in the sun, therefore, sets up a complicated system of cause and effect in which plasma flows inside the sun – churned up by the enormous heat produced by nuclear fusion at the center of the sun – create the sun's magnetic fields. This system is known as the solar dynamo.

We can observe the shape of the magnetic fields above the sun's surface because they guide the motion of that plasma – the loops and towers of material in the corona glow brightly in EUV images. Additionally, the footpoints on the sun’s surface, or photosphere, of these magnetic loops can be more precisely measured using an instrument called a magnetograph, which measures the strength and direction of magnetic fields.

Next, scientists turn to models. They combine their observations – measurements of the magnetic field strength and direction on the solar surface – with an understanding of how solar material moves and magnetism to fill in the gaps. Simulations such as the Potential Field Source Surface, or PFSS, model – shown in the accompanying video – can help illustrate exactly how magnetic fields undulate around the sun. Models like PFSS can give us a good idea of what the solar magnetic field looks like in the sun’s corona and even on the sun’s far side.

A complete understanding of the sun’s magnetic field – including knowing exactly how it’s generated and its structure deep inside the sun – is not yet mapped out, but scientists do know quite a bit. For one thing, the solar magnetic system is known to drive the approximately-11-year activity cycle on the sun. With every eruption, the sun’s magnetic field smooths out slightly until it reaches its simplest state. At that point the sun experiences what's known as solar minimum, when solar explosions are least frequent. From that point, the sun’s magnetic field grows more complicated over time until it peaks at solar maximum, some 11 years after the previous solar maximum.

“At solar maximum, the magnetic field has a very complicated shape with lots of small structures throughout – these are the active regions we see,” said Pesnell. “At solar minimum, the field is weaker and concentrated at the poles. It’s a very smooth structure that doesn’t form sunspots.”

Take a look at the side-by-side comparison to see how the magnetic fields change, grew and subsided from January 2011 to July 2014. You can see that the magnetic field is much more concentrated near the poles in 2011, three years after solar minimum. By 2014, the magnetic field has become more tangled and disorderly, making conditions ripe for solar events like flares and coronal mass ejections.

Despite vaccines, no Covid herd immunity in 2021: WHO