The biggest known structures in the universe are called galaxy clusters which are formed by thousands of galaxies like our milky way.

Chennai: In an exciting breakthrough research, five Indian scientists have come up with a new model to observe the cosmic web called filaments which can throw light on how the galaxies and galaxy clusters were formed and can also reveal the new structures in the universe.

A team of astrophysicists led by Dr Surajit Paul from the University of Pune and an associate at the Inter-University Centre for Astronomy and Astrophy-sics (IUCAA), Pune, presented their calculations at an international science conference in Goa last week.

Coming up with a first- ever model to observe the filaments, the Indian scientists’ calculations revealed that it is possible to detect the unseen structures with the upcoming world’s lar-gest radio telescope — Squa-re Kilometre Array (SKA).

The biggest known structures are called galaxy clusters formed by thousands of galaxies like our milky way. These clusters are connected by filaments which act like a cosmic web. “We have given the theoretical model like how the filaments can emit radiation and in what wavelengths they can be observed.

India, 9 others, making largest telescope
“The radio telescopes which can observe the low energy light can observe the filaments,” Dr Surajit Paul who headed  team of astrophysicists from the University of Pune and an associate at the Inter-University Centre for Astronomy and Astrophysics (IUCAA), Pune said.

“The cosmic web is having a huge amount of material, but it is very cold and so it emits very little radiation and it’s hard to detect with the currently available telescopes. That’s why it has not been observed yet,” he said. 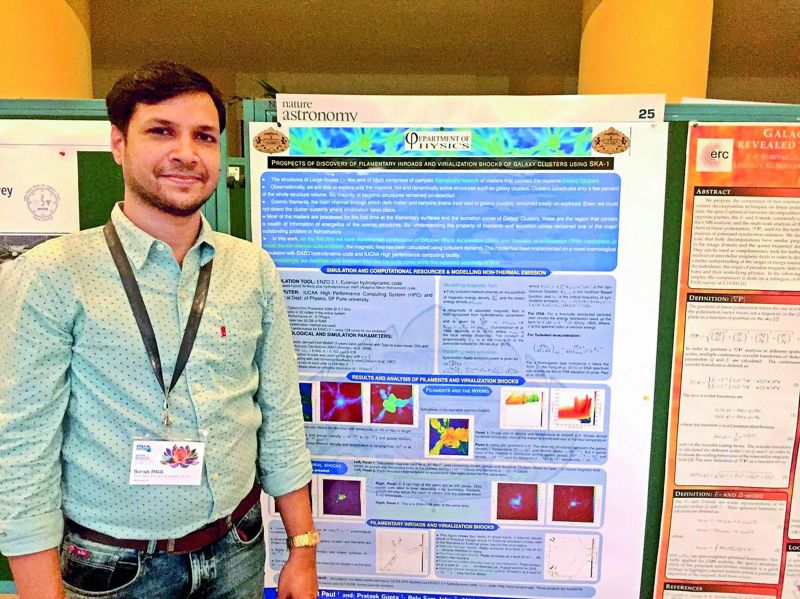 The SKA telescope is being constructed in two places in Australia and South Africa by 10 nations including India, UK, Japan and Australia. The team expects those filaments will first be observed closer to massive galaxy clusters where they inroad into the cluster medium. The turbulence in this region would lead to particle re-acceleration and amplification of strong magnetic field. This creates a synchrotron radiation which makes the filaments detectable in radio waves. “Once we can observe them we can tell about the structure of the universe and how these galaxy clusters were formed, where they got the energy they have now,” Paul said.

...
Tags: inter-university centre for astronomy and astrophysic, university of pune

Not yet clear if Omicron more transmissible, causes severe disease, says WHO