A complete guide to the Total Solar Eclipse on August 21

This celestial event is a solar eclipse in which the moon passes between the sun and Earth and blocks all or part of the sun for up to about three hours, from beginning to end, as viewed from a given location. (Image: Pixabay)

On Monday, August 21, 2017, all of North America will be treated to an eclipse of the sun. Anyone within the path of totality can see one of nature’s most awe-inspiring sights - a total solar eclipse. This path, where the moon will completely cover the sun and the sun's tenuous atmosphere — the corona — can be seen, will stretch from Lincoln Beach, Oregon to Charleston, South Carolina. Observers outside this path will still see a partial solar eclipse where the moon covers part of the sun's disk.

Who can see it?

Lots of people! Everyone in the contiguous United States, in fact, everyone in North America plus parts of South America, Africa, and Europe will see at least a partial solar eclipse, while the thin path of totality will pass through portions of 14 states. 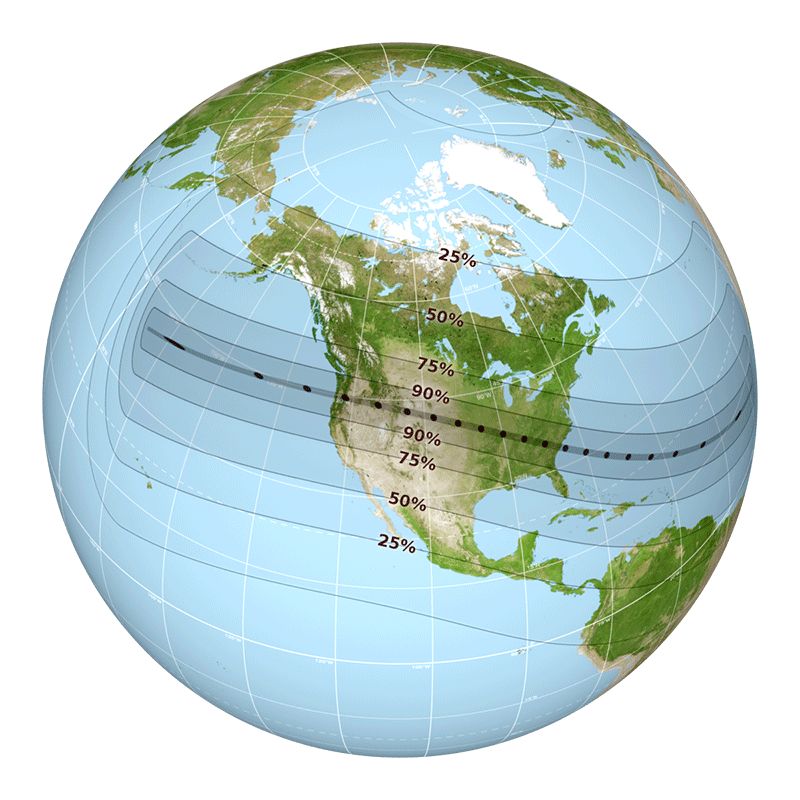 This map shows the globe view of the path of totality for the August 21, 2017 total solar eclipse. (Image Credit: NASA’s Scientific Visualization Studio)

This celestial event is a solar eclipse in which the moon passes between the sun and Earth and blocks all or part of the sun for up to about three hours, from beginning to end, as viewed from a given location.  For this eclipse, the longest period when the moon completely blocks the sun from any given location along the path will be about two minutes and 40 seconds.  The last time the contiguous U.S. saw a total eclipse was in 1979. 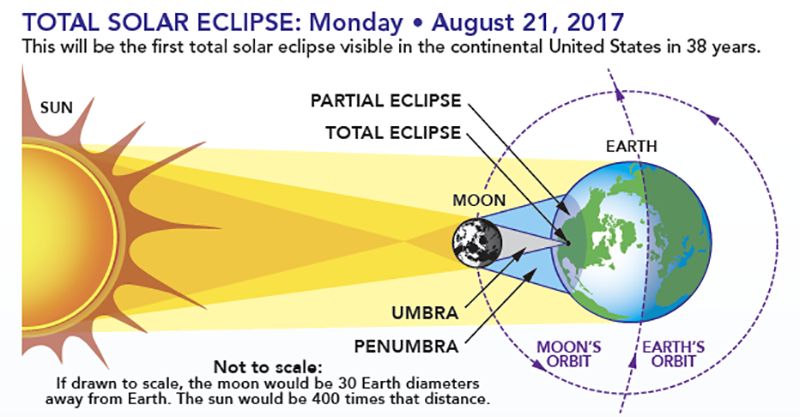 Diagram showing the Earth-sun-moon geometry of a total solar eclipse. Not to scale: If drawn to scale, the Moon would be 30 Earth diameters away. The sun would be 400 times that distance. (Image Credit: NASA’s Scientific Visualization Studio)

Where can you see it?

You can see a partial eclipse, where the moon covers only a part of the sun, anywhere in North America (see “Who can see it?”). To see a total eclipse, where the moon fully covers the sun for a short few minutes, you must be in the path of totality. The path of totality is a relatively thin ribbon, around 70 miles wide, that will cross the U.S. from West to East.  The first point of contact will be at Lincoln Beach, Oregon at 9:05 a.m. PDT. Totality begins there at 10:16 a.m. PDT.  Over the next hour and a half, it will cross through Oregon, Idaho, Wyoming, Montana, Nebraska, Iowa, Kansas, Missouri, Illinois, Kentucky, Tennessee, Georgia, and North and South Carolina.  The total eclipse will end near Charleston, South Carolina at 2:48 p.m. EDT.  From there the lunar shadow leaves the United States at 4:09 EDT.  Its longest duration will be near Carbondale, Illinois, where the sun will be completely covered for two minutes and 40 seconds.

When can you see it?

How can you see it?

You never want to look directly at the sun without appropriate protection except during totality.  That could severely hurt your eyes.  However, there are many ways to safely view an eclipse of the sun including direct viewing – which requires some type of filtering device and indirect viewing where you project an image of the sun onto a screen. Both methods should produce clear images of the partial phase of an eclipse.

This information has been generated by NASA.

WHO tiptoes around what to call virus. No, you can't call it Wuhan virus

You saw it on WhatsApp right? No, salt water is no good against coronavirus

Dear ISRO, do astronauts have to be fighter pilots? Why not a doctor?