Watched by tourists, activists and a helpful guard dog named Lulu, a new generation of olive ridley sea turtles plod across a short stretch of sand and into the warm Pacific, to grow and eventually return to the same beach someday to lay their own eggs.

The tiny turtles head with single-minded determination to the sea, guided by natural instinct — but they are helped along by humans who have delivered them by the pan-full, the bucket-full, and some 35,000 this year alone. 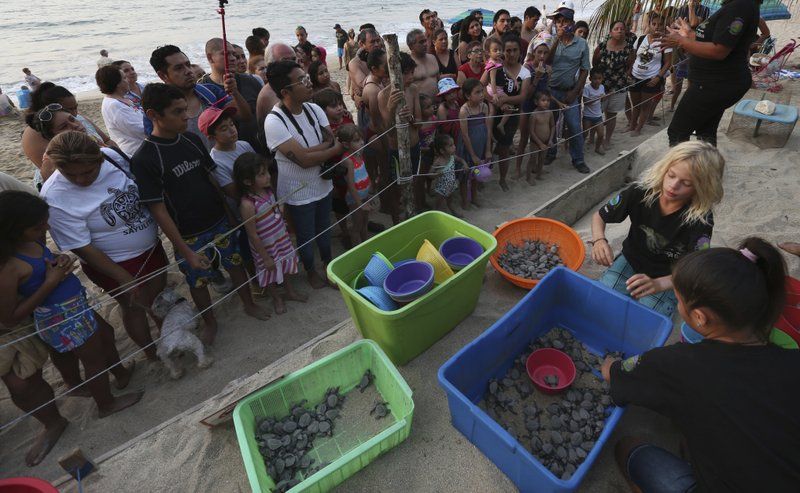 Volunteers put individual olive ridley sea sea turtle hatchlings into small buckets, to give to people wishing to help with their release to the sea in Sayulita, Nayarit state, Mexico. (Photo: AP)

It started a decade ago, when an American couple living in the Mexican beach town of Sayulita, Erik and Odette Jorgensen, noticed during strolls on the beach in the fall that sea turtles were crawling up onto the sand to lay their eggs — but soon after the pair would see signs that the nests had been looted by humans.

“I started the program back 10 years ago after seeing 15 turtles come up and very close to the front yard here, and within two days every nest had been opened up and robbed of the eggs,” Erik Jorgensen said. “So I decided this wasn’t a good idea and started the program to bring the nests into here to protect them.”

When turtles are detected laying eggs in the second half of each year, volunteers quickly scoop up the eggs and relocate them to a protected, taped off, guarded area in front of Jorgensen’s bar, where Lulu, a mid-sized white and brown cocker mix, watches over them when no humans are around. There they incubate for about 45 days until they hatch, are counted and freed.

“Every year we protect approximately 300 to 400 nests,” said Maria Alejandra Aguirre, a marine biologist who works with the project.

It’s a race to protect the endangered turtles: Illegal nest raiders can carry off 100 eggs per nest, and earn as much $50 per nest doing so. Sea birds and other predators can easily pick off the young hatchlings.

Sayulita’s turtle camp is now part of a civil association known as Red Tortuguera AC that has five similar turtle camps in different parts of Nayarit, but the camp is entirely dependent on volunteers and donations. Ana Fernandez, a Mexican tourist visiting Sayulita, attended one of the releases with her son.

“It is a very important lesson for the children, so they learn the cycle of life, and how we can cooperate with it instead of hindering it,” said Fernandez.