A round frozen world just 186 miles (300 kilometres) across, the Goblin was spotted by astronomers in 2015 around Halloween, thus its spooky name. (Photo: AP)

A scrawny dwarf planet nicknamed the Goblin has been discovered well beyond Pluto. A round frozen world just 186 miles (300 kilometres) across, the Goblin was spotted by astronomers in 2015 around Halloween, thus its spooky name. But it wasn’t publicly unveiled until on October 2 following further observations with ground telescopes.

Scott Sheppard of the Carnegie Institution for Science, one of the astronomers who made the discovery, said the Goblin is on the small end for a dwarf planet. It is officially known as 2015 TG387 by the International Astronomical Union’s Minor Planet Centre. This is the third dwarf planet recently found to be orbiting on the frigid fringes of our solar system. 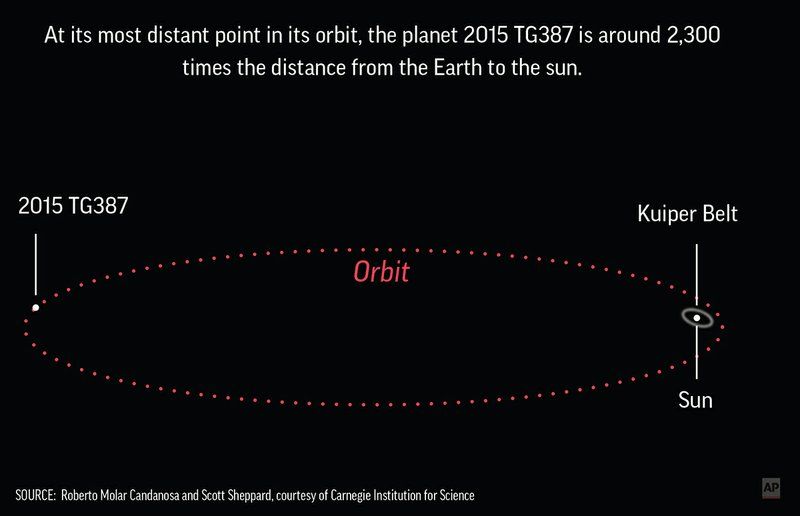 Sheppard, along with Northern Arizona University’s Chad Trujillo and the University of Hawaii’s David Tholen, spotted the Goblin in October 2015 when it was relatively nearby — around 80 AU. The two other dwarf planets are Sedna, discovered in 2003, which is about 620 miles (1,000 kilometres) across, and 2012 VP113, about 310 miles (500 kilometres). They were found by some of the same astronomers.

Thousands — even a million — more such objects could be way out there orbiting in the so-called Inner Oort Cloud, according to the researchers. They’re in hot pursuit of them, as well as a potentially bigger-than-Earth planet known as Planet 9, or Planet X, believed by some scientists to be orbiting at a distance of hundreds of AU.

“These objects are on elongated orbits, and we can only detect them when they are closest to the Sun. For some 99 per cent of their orbits, they are too distant and thus too faint for us to observe them. We are only seeing the tip of the iceberg,” Sheppard said in an email. Sheppard said the faraway objects are “like breadcrumbs leading us to Planet X.”

“The more of them we can find, the better we can understand the outer solar system and the possible planet that we think is shaping their orbits — a discovery that would redefine our knowledge of the solar system’s evolution,” he said in a statement.

Conjunctivitis could be a symptom for Covid