On Wednesday, 1st March, a 10-year-old 5th grade Bria wrote a letter to Tesla CEO Elon Musk, suggesting how he could run his company better. Musk was so impressed by his idea that he quickly responded, expressing his delight to have received the letter and how they plan on taking inputs from Bria’s ideas.

“I have noticed that you don’t advertise, but many people make homemade commercials for Tesla and some of them are very good, they look professional and they are entertaining. So, I think you should run a competition on who can make the best homemade Tesla commercial and the winners will get their commercial aired,” Bria wrote. She further suggested that Musk should award winners a year of free Super-charging or a Model 3 Easter Egg or something along those lines. 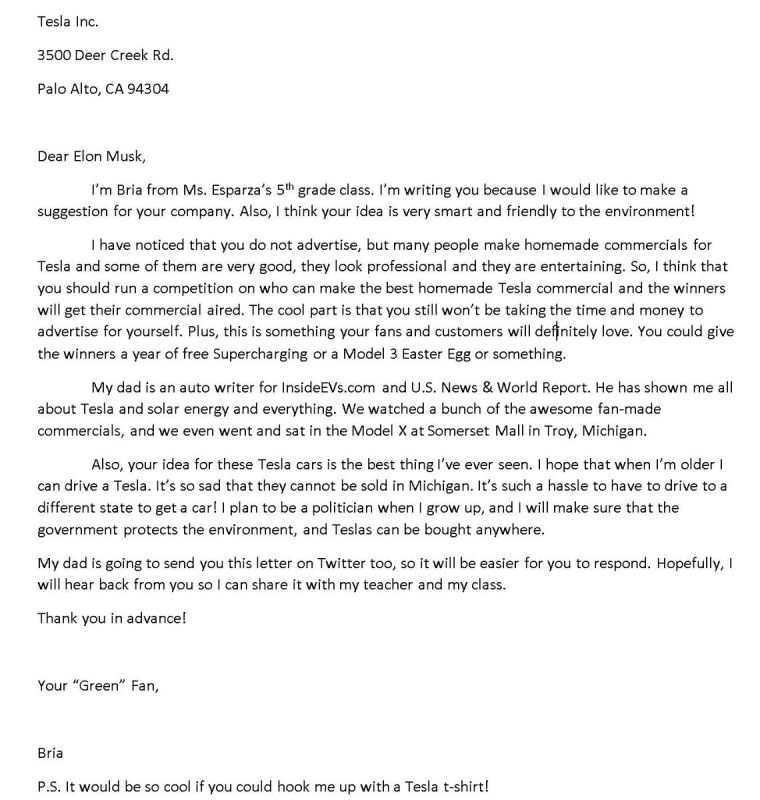 “My dad is going to send you this letter on Twitter too, so it will be easier for you to respond. Hopefully, I will hear back from you so that I can share it with my teachers and my class,” Bria added.

Bria’s father Steven who is an auto-journalist by profession took to Twitter to publish this letter with the following given text: “Elon, my daughter wrote you a letter for a school project. She mailed it to Tesla, but I figured I’d paste here. Thank you!”

To which Musk replied saying, “Thank you for the lovely letter. That sounds like a great idea. We’ll do it!