A 3-inch green anole lizard, that was found in a bundle of tatsoi greens last week by a kindergartner at Riverside Elementary School, sits in an enclosure. (Photo: AP)

A tiny green lizard found by a New Jersey kindergarten student in a bundle of chilled salad greens at home has wriggled its way into the hearts of an entire elementary school class, which has adopted it as a mascot.

The three-inch (7.5-cm) critter went unnoticed for a few days in the refrigerator in Princeton, New Jersey, before Sally Mabon and her daughter Faye found its limp body while unwrapping a bunch of tatsoi, an Asian leaf, science teacher Mark Eastburn of Riverside Elementary School in Princeton said on Tuesday.

Warmth restored its energy and soon the anole lizard was on its way to Riverside Elementary School, where it caught "oohs" and "aahs" like flies, and quickly became the class pet.

Less Godzilla and more Geico Gecko, the juvenile lizard has been named "Green Fruit Loop" by the children. 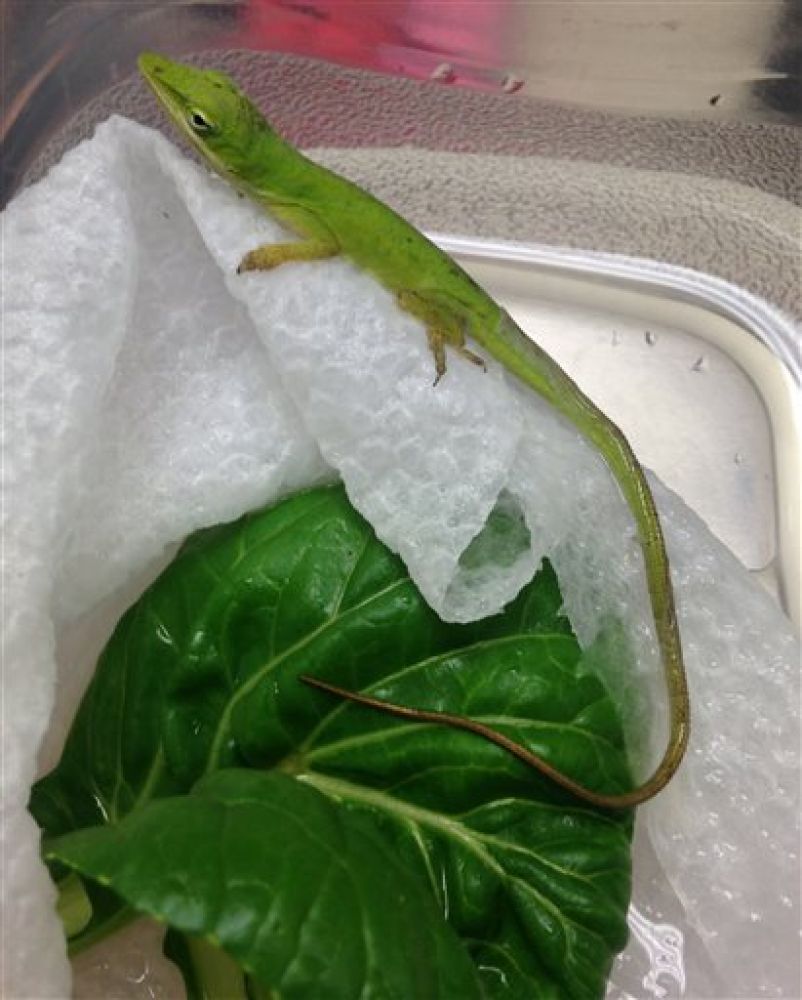 3-inch green anole lizard that was found in a bundle of tatsoi greens last week by a kindergartner at Riverside Elementary School in Princeton, N.J. (Photo: AP)

"It's great because the kids are studying DNA and the anole is the only reptile to have its entire DNA code sequenced," Eastburn said.

Fran McManus, spokeswoman for Whole Earth Center, the natural foods store where Mabon bought the tatsoi, told Reuters by telephone that a Florida grower believes the lizard snuggled into the greens as they were being harvested in chilly temperatures and then woke up as a stowaway in New Jersey.

The lizard lurking in the salad greens has turned out to be a valuable learning experience, Eastburn said in an email to Whole Earth.

"It underscores that food doesn't just come from the supermarket but from actual outdoor farms," the email said.

Also known as an American chameleon, the anole changes color from green to brown to blend into its surroundings, which now include a glass enclosure near the blackboard in Eastburn's classroom.

So far, the lizard has feasted on a live cricket and some fruit flies and has no appetite for tatsoi, Eastburn said.