The recent tragedy at Kerala’s Puttingal Devi temple where an estimated 108 devotees were charred to death and many more severely burnt during a fireworks display has once again turned the focus on India’s anarchic Hindu temples. The vast majority of Hindu temples in the country, many of which are thronged by millions during festivals and visited by thousands on a daily basis, remain trapped in medieval practices even as India strives to assume its place in the 21st century.

The times might have changed, the crowds earlier in the hundreds have swollen to thousands, and the laws recast to ensure equality to all castes, sexes and social groups, but the majority of Hindu temples remain frozen in the past, zealously guarded by a priestly caste that refuses to relent on tradition. Worse, basic norms that are mandatory elsewhere, including fire and safety regulations, are largely not enforced in temples across India, leading to fire hazards, stampedes and deaths. Far from being a matter of religious freedom, this is more a public safety issue. 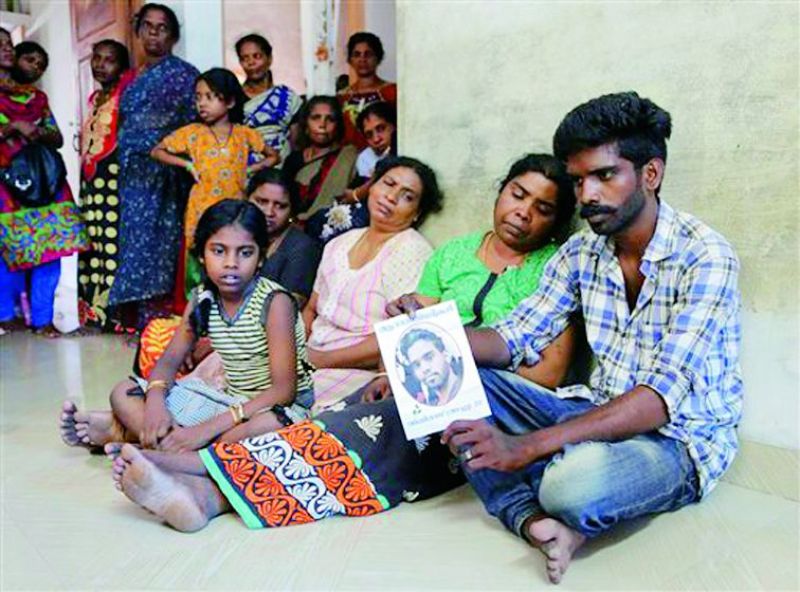 Heartbreak: A youth sits next to his mother and other relatives as he displays a photograph of his brother who died after a fire during a fireworks display at the Puttingal temple complex in Kollam district, Kerala. (Photo: AP)

Priests and trusts running these temples have resisted change, arguing that they cannot fiddle with age-old traditions. In the case of the Kerala temple fire, the trust says it will not stop the fireworks, despite the fact that this year’s show was conducted without specific permission. Some temples also impose a slew of disgraceful restrictions in the name of tradition, mainly on women, and at some places on those belonging to particular sects or castes. This has led to a spate of litigation against temples with the courts invariably ruling against the discriminatory policies of temples.

Recurring tragedies as well as unacceptable gender and caste restrictions raise the inevitable question of whether India’s temple managements can junk medieval traditions and move into the 21st century. Most of the problems involving Hindu temples in India stems from the unorganised nature of the Hindu religion. Unlike in Christianity where the Church is organised and various denominations run and own religious institutions, most Hindu temples are not affiliated to any organisation or order.

The vast majority of Hindu temples are either privately owned or run by Trusts, most of which also do not follow any edict, guidelines or even religious rules from a superior body or order. Historically, the larger and better Hindu temples in India were built and sustained by the royalty, rich merchants and the offering of devotees. These were given over to priests (usually Brahmins) for their upkeep and religious functions.

In many cases, priests or a group of priestly families were given revenue rights over villages for their own sustenance and temple maintenance. In some cases, agricultural land was granted to priests in lieu of revenue rights. This was especially true for far flung places, poorer regions and in cases where local communities were unable to support a temple.

Smaller temples were built and maintained at the village level and kept going through local contributions, hand-outs from zamindars or local merchants or through cultivable land. Usually it was a combination of means that sustained the local Hindu priestly class. As political power gradually shifted to Muslim rulers in India, the Hindu priestly class came under tremendous pressure and in many places temples were abandoned and left to ruin. The larger and better known temples, especially in places of pilgrimage, survived and many even prospered, leading to a concomitant increase in the wealth and powers of priestly families connected to these shrines.

After Independence, the enormous wealth and influence of some Hindu temples came to the notice of the government leading to some clarifications on laws regarding ownership of Hindu temples. It was decreed that all land and property of a Hindu temple belonged not to the priests that ran it but to the temple deity, who was designated in law to be a “perpetual minor” and therefore requiring proper care and maintenance.

Thus temple priests became the caretakers and not owners of Hindu temples. This prevented unscrupulous priests from selling off temple property but did little to ease the stranglehold of a hereditary class of temple priests on the day to day management of temples. In some instances, particularly in the case of very rich temples, the government stepped in and appointed Trustees to run them. There were also some attempts by the government to siphon off the cash, jewellery and other valuables in the vaults of some super rich temples under the argument that this was public money and should be used for public benefit.

While there is no justification for the confiscation of the property or wealth of Hindu temples when similar institutions run by other religious orders are free to use their property and wealth as they please, there is also an urgent need to prevent their misappropriation by caretaker priests and to ensure their deployment for social good.

The idea of the government usurping control of Hindu temples is a bad one; it is both discriminatory and impractical. A secular government has no business to run temples and other religious institutions.

A better option for the government would be to nudge or even compel temple managements throughout the country to establish legal trusts, regulate their affairs and use their wealth both for social causes as well as for the proper upkeep of their temples. This could be done through progressive legislation rather than through retrogressive appropriation.

Chaos, mismanagement, avarice and filth need not mark our temples. Belur Math in West Bengal founded by Swami Vivekananda to honour his guru Sri Ramakrishna Paramahansa, is deluged by thousands of devotees during certain festivals and special occasions. Yet there is never any sign of chaos; order is maintained by hundreds of volunteers who keep the crowds confined to orderly queues and the premises spotlessly clean. These organisations also use a significant part of their revenues for social causes such as the running of schools and hospitals. Such institutions should be the role model for our ancient temples and not the government run and often mismanaged public sector.

Swami Vivekananda whose thoughts and writings have left a deep impression on modern India was not a believer in blind traditions or bigotry. He believed that social customs and practices should change according to the times and the changing needs of society. It was this progressive spirit that he urged upon his countrymen: “As time rolls on, new smritis will come, and new sages will come and they will direct the society through better channels according to the need of the age.” The time clearly has come for India’s numerous temples to change and adapt to better suit the hugely increased demands of the day and the rise of a more egalitarian order.

July 14, 2015: At least 22 pilgrims, mostly women, were killed and 20 others injured in a stampede during Godavari pushkaralu in Rajahmundry in Andhra Pradesh.

October 3, 2014: At least 32 people died in a stampede during Ravan burning at Dussehra at Patna’s Gandhi Maidan.

October 14, 2013: 91 people were killed in a stampede at the Ratangarh Mata Temple in Datia, Madhya Pradesh.

February 10, 2013: At least 36 people killed in a stampede at the Allahabad railway station during the Kumbh Mela.

January 15, 2011: At least 104 Ayyappa devotees were killed and 50 injured in a stampede at Uppupara in Kerala when a jeep carrying pilgrims ran into crowd.

March 4, 2010: 63 people, mostly women and children, were killed and about 74 were injured in a stampede at Ram Janki temple of Kripalu Maharaj where free clothes were being distributed in Pratap Garh, Uttar Pradesh.

September 30, 2008: At least 224 pilgrims died and over 60 were injured in a stampede at the Chamunda Devi temple in Jodhpur, Rajasthan, after a rumour of a bomb going off prompted the people to climb up a hill.

Mohan Guruswamy | The Kumbakonam of the Kanchi Shankaracharya

Saeed Naqvi | When Indian diplomacy left both Moscow & US annoyed

Is the Supreme Court right in punishing Prashant Bhushan?