DECCAN CHRONICLE. | PROF U R RAO
Published Jul 10, 2016, 2:49 am IST
Updated Jul 10, 2016, 3:01 am IST
With Juno reaching Jupiter’s Orbit, Indian scientists are hopeful of launching a similar orbiter to the biggest planet in the future.

Engineers and scientists working on Nasa's Juno mission have been busying themselves, getting their newly arrived Jupiter orbiter ready for operations around the largest planetary inhabitant in the solar system.

One of the reasons why all scientists are excited about Juno (Jupiter Near-polar Orbiter) reaching Jupiter’s orbit is that we will have a better understanding of this virgin planet and perhaps help solve the million dollar question about formation of planets of the solar system, and perhaps why each planet is unusually different from the other. Jupiter, the biggest planet of the solar system, was the first planet to be formed after the Sun, a second generation star, experienced an incredible burst of expansion known as inflation, and the matter gradually homogenized to form planets. Our solar system is only 4.6 billion years old in comparison with the universe which is estimated at roughly 13.8 billion years old.

We are all puzzled as to why Jupiter has remained a gaseous planet with perhaps a small, solid core, while life exists on earth, and Venus and Mercury, which are nearest to the earth, are boiling hot and ice cold respectively. We also do not have evidence as to why only the earth has a magnetic field, but I feel this magnetic field is most important for life as it protects our atmosphere from cosmic rays hitting us. We are still trying to understand how these planets were formed, and why we are here!

Of course, there are many questions unanswered about Jupiter and therefore we await amazing scientific data from Juno as it orbits this planet 37 times till February 2018. Gradually, the orbiter will use all nine instruments onboard to learn everything about Jupiter's interior and atmosphere. It will map Jupiter's magnetic fields. The colour camera JunoCam will snap close-ups of Jupiter's swirling clouds, polar regions and shimmering southern and northern lights. And to ward off intense radiation around Jupiter, all the sensitive electronic gadgets have been encased in a one-inch thick solid titanium box, but eventually the orbiter will succumb to the harsh nvironment. At that time - currently estimated to be in about 20 months - it will be commanded to dive into the atmosphere.

But in that time, some critical questions are likely to be answered: what's at the core of Jupiter? Scientists are not sure whether it is a solid core or whether it started off as a rocky planetary core, which then gathered all the gas that today makes up most of the planet, or whether it formed from an unstable region in a gas cloud. If there's core, it has cooled over the years, and perhaps a magnetic field.

Another question scientists hope to answer is how much water is in the planet. For scientists, that's a measure of how much oxygen there is locked up as the oxygen in water. Based on measurements made from Earth, there seems to be less oxygen on the planet than there is in other objects in that region of the solar water. If there turns out to be lots of water — and so lots of oxygen — that would suggest the planet formed near the Sun. If there is relatively little water, that would suggest it formed further out in the solar system, and migrated in. And if there is more water, we should look for water in other planets as well.

At some point, private enterprises which are beginning to plan voyages into outer space could add a new dimension to exploration of the solar system and perhaps bring down the cost of missions like JONA which has cost Nasa $1.1 billion. They could even try to find methods to mine minerals or new materials as we are running out of resources like oil on Earth.  All of us, however, know that unlike Mars, Jupiter cannot be colonised. That’s why missions like the “Curiosity” rover are studying the Red Planet in detail. Our own Orbiter to Mars too could contribute to better understanding of this planet and efforts across the world to build human colonies.

If we are studying Mars, can Isro afford a mission to Jupiter? Of course, the cost of such a mission will certainly be very cheap and definitely much less than $ 1.1 billion, but we have to improve our capabilities and build them just like how we designed and built our own satellites and launch vehicles. It is for the government to take a call on whether we should attempt to study Jupiter from up close, just like it has to take a call on sending an Indian into space onboard our rocket. We can build bigger rockets and improve our capabilities to launch an orbiter to Jupiter just like we designed our own multi-purpose satellites. 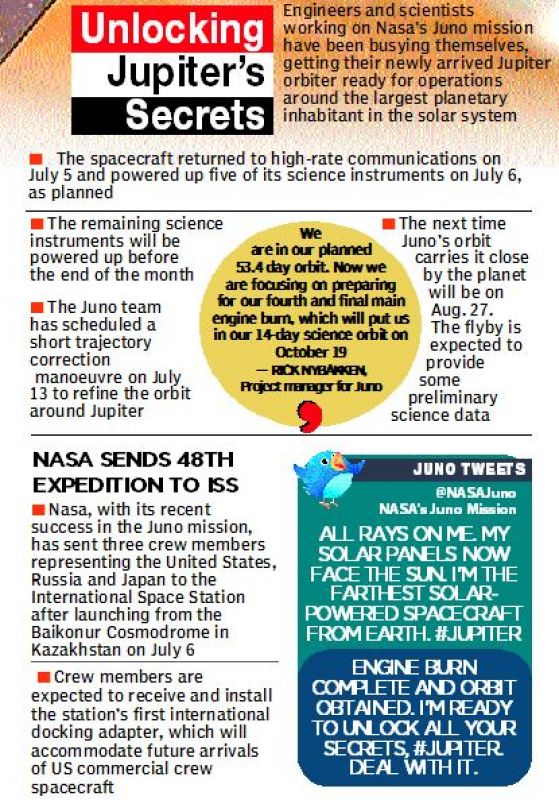 As told to B. R. SRIKANTH