Pakistani troops clear way for an ambulance transporting a lifeless body of a victim from Bacha Khan University in Charsadda town, some 35 kilometers (21 miles) outside the city of Peshawar. (Photo; AP)

Peshawar: At least 25 people, including the attackers, died in an armed assault on Bacha Khan university in Pakistan on Wednesday, where witnesses reported two large explosions as security forces moved in under dense fog to halt the bloodshed.

The Tehreek-e-Taliban Pakistan, which had massacred 134 school children at a school in Peshawar in December, 2014, claimed responsibility for the attack at the Bacha Khan University in Charsadda.

Strongly condemn the terror attack at Bacha Khan University in Pakistan. Condolences to families of the deceased. Prayers with the injured.

The number of dead rose rapidly after armed men stormed the Bacha Khan university in Charsadda, about 50 kilometres (30 miles) from the city of Peshawar, in the latest outrage to hit the militant-infested region.

Police, soldiers and special forces swarmed the university from the ground and the air in a bid to shut down the assault, as television images showed students running for their lives. 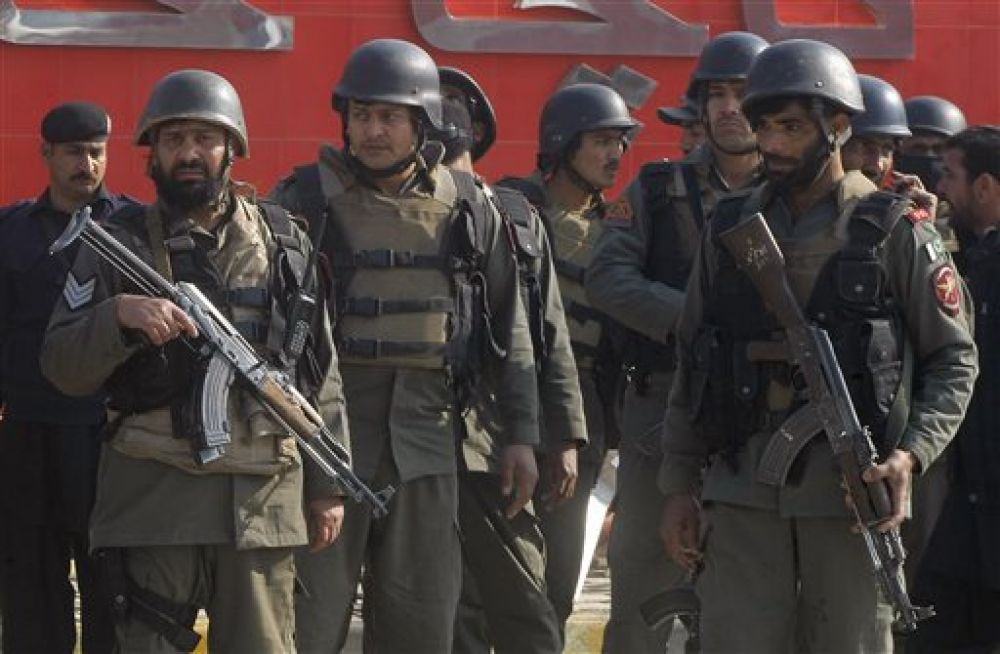 Pakistani troops arrive at Bacha Khan University in Charsadda town, some 35 kilometers (21 miles) outside the city of Peshawar. (Photo: AP)

“The death toll in the terrorist attack has risen to 21,” regional police chief Saeed Wazir told AFP hours after the alarm was first raised.

He said the operation had ended and security forces were clearing the area, with most of the student victims shot dead at a hostel for boys on the campus.

“More than 30 others including students, staff and security guards were wounded,” he added.

It was not immediately clear if the four were included in the toll of 12 given by police chief Wazir.

Students spoke of one hero teacher -- named by media as Syed Hamid Hussain -- fighting back against the intruders, shooting his weapon in a bid to protect his charges. 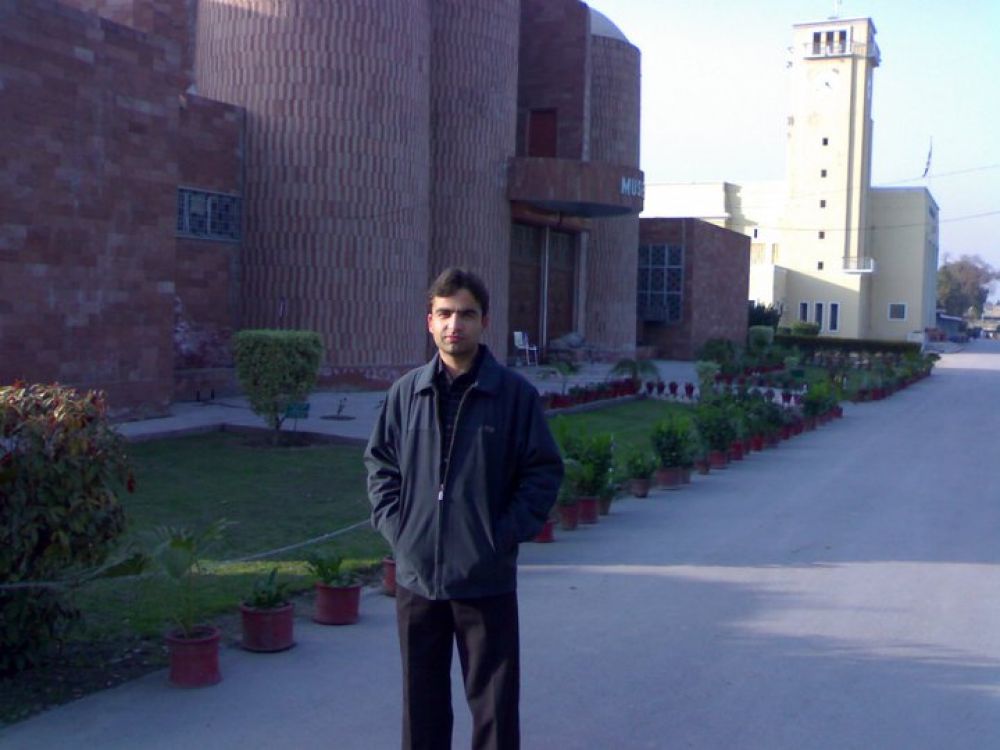 Geology student Zahoor Ahmed said his chemistry lecturer had warned him not to leave the building after the first shots were fired.

“He was holding a pistol in his hand,” he said.

“Then I saw a bullet hit him. I saw two militants were firing. I ran inside and then managed to flee by jumping over the back wall.”

Another student told television reporters he was in class when he heard gunshots.

“We saw three terrorists shouting, ‘Allah is great!’ and rushing towards the stairs of our department,” he said.

“One student jumped out of the classroom through the window. We never saw him get up.”

He also described seeing the chemistry professor holding a pistol and firing at the attackers.

“Then we saw him fall down and as the terrorists entered the (registrar) office we ran away.”

Syed hamid Hussain from chemistry department has been martyred in Charsadda attack...May his Soul rest in peace... https://t.co/5vVQibp4GL

Witnesses said dozens of personnel in combat fatigues and carrying automatic weapons had descended on the campus after the attack began, as helicopters buzzed overhead and ambulances raced to the scene.

Officials at hospitals in the city confirmed they were receiving injured patients, and Shaukat Yousafzai, provincial information minister told media that some of the injured were being taken to Peshawar. 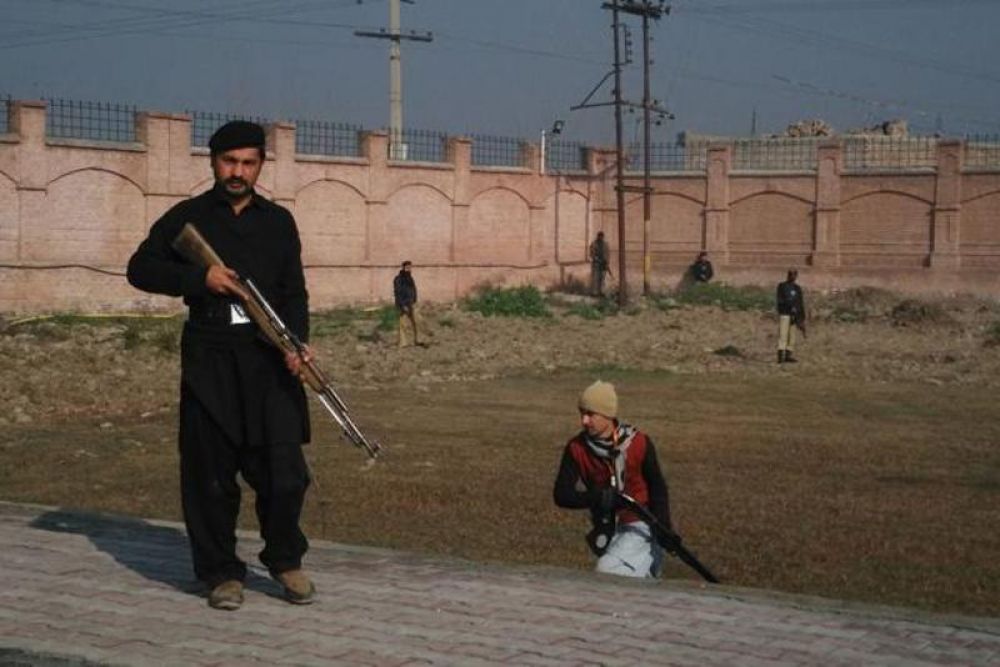 No group immediately claimed responsibility for the attack, which had echoes of a Taliban assault on an army-run school in Peshawar in December 2014 that killed more than 150 people, most of them children.

“There are many staff members and students on the campus,” university vice chancellor Fazal Raheem Marwat said, adding he had been on his way to work when he was informed of the attack.

“There was no announced threat but we had already beefed up security at the university.”

Naik Mohammed, security chief at the university, said the attackers had entered close to a campus guest house.

The 2014 Taliban assault on the Peshawar school was Pakistan’s deadliest ever attack, and prompted a crackdown on extremism in Pakistan.

After a public outcry, the military launched an offensive against extremists in the tribal areas where they had previously operated with impunity.

“The NAP has allowed improvements in two areas: the first actual implementation of prosecution against hate speech, and the arrest of terrorists from sectarian organisations which feed religious violence,” said one of the authors, Syed Hassan Akbar.

On Tuesday, a suicide attack at a market on the city’s outskirts killed 10 people, in addition to the bomber.

Small coffins are the heaviest to carry: Peshawar school attack

21 killed in brutal attack on Bacha Khan University in Pakistan