Modi made no deal with Italy on AgustaWestland case: Government

Prime Minister Narendra Modi with other ministers at the Parliament House, in New Delhi. (Photo: PTI)

New Delhi: Prime Minister Narendra Modi “did not cut any deal of any sort” in the Agusta investigations, a furious government said late on Friday evening while lashing out at the Opposition fiercely adding that the central issue in the matter is corruption and that any other line of assumption, approach and effort, as is being attempted in some quarters, is misleading, tries to hide the wrongdoers and is driven by instincts of self preservation.

The government also termed attempts to link NSA Ajit Doval and principal secretary Nripendra Misra, one of the accused, to the PM as a “totally baseless assertion and indicative of malicious intent”.

“Those who cannot see Prime Minister succeed even hint at him cutting a deal. Nothing could be farther from the truth. PM Modi did not cut any deal of any sort. His only goal and priority is the development of comprehensive national power, and empowerment of our masses,” the government statement said.

Lashing out at the Opposition and in a clear reference to the Congress without naming it, the I&B ministry said, “It is indeed tragic that a small section of the Indian polity has attempted, unsuccessfully, to divert and diffuse the public discourse on this matter. They question the speed of the government processes, especially the investigation. But, they do not ask how the corrupt influenced the process of acquisition in the first place and bled the nation. They do not admit corruption; they instead boldly proclaim, ‘catch us if you can’.”

“By asking why did the Prime Minister and the BJP government not take any action on the alleged offer dated 08.11.2015 made by James Christian Michael to be questioned by the CBI and ED including on Indian soil, some have even tried to side with a wanted criminal. It is well known that any understanding/agreement with an accused outside the frame of law is a criminal act in itself.

James Christian Michael is a criminal wanted by the Indian law enforcement agencies. We are pursuing all legal means to arrest him and have him extradited to India. Mr Michael should submit himself to the Indian legal system rather than make elliptical references to offers that are suspect in intent and reality,” the statement said.

“A few have even sought to link one of the accused with Ajit Doval, present NSA, as also Nripendra Misra, principal secretary to the PM. This is a totally baseless assertion, devoid of reason and logic, and indicative of malicious intent. In reality, there is no such connection,” the government said. 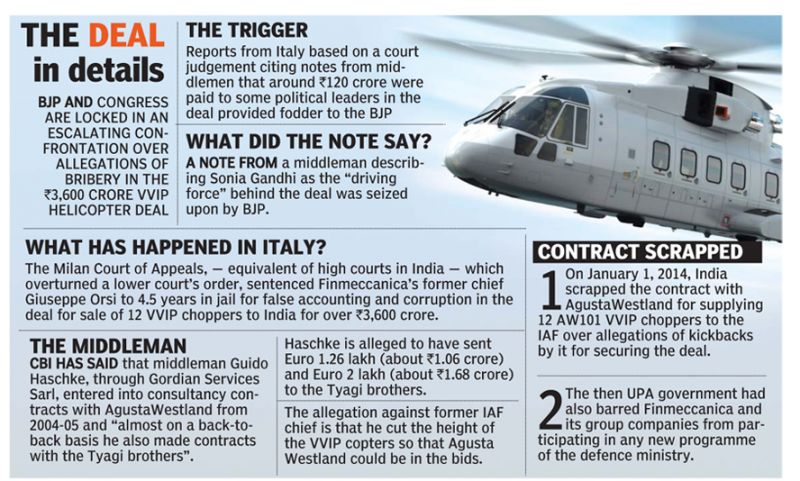 “In the matter pertaining to the acquisition of Agusta Westland helicopters, the undisputed central issue that stands out is corruption, especially bribery. Any other line of assumption, approach and effort, as is being attempted in some quarters, is misleading, tries to hide the wrongdoers and is driven by instincts of self preservation,” the government said.

“Ever since the new government was given the responsibility to serve the people, it has acted with speed, drive and purpose to empower the country’s masses. It continues to relentlessly pursue fearless and transparent governance. One of the core goals of our governance has been to unearth and uproot corruption, and punish the corrupt,” it added. “The present government has taken effective action to bring out the truth and will leave no stone unturned in pursuing all means to bring to justice the corrupt and the wrong-doers in this case,” it further said.

“The government has acted proactively and with alacrity against Agusta Westland International and Finmeccanica. It is the present government which through its order dated 3 July 2014, put on hold all procurement/acquisition cases in the pipeline of six companies figuring in the FIR registered by the CBI. In doing so, we did not let the preparedness of our defence forces suffer. At the same time, we also ensured that no new capital procurement was made thereafter from these companies in the tenure of the present government,” it said.

“In their drive to divert the public attention from their own corruption, some have said that the Modi government permitted Augusta Westland to bid for 100 Naval utility helicopters in April 2015. The fact is that a techno-commercial request for proposal (RFP) for Naval utility helicopters was issued to eight vendors on 4 August, 2012. In response to the RFP, M/S Eurocopters, France and M/S Agusta Westland S.P.A Italy submitted their techno-commercial proposals on 4 March, 2013.

RFP of the procurement case was retracted by the government on 13 October, 2014,” the government statement said, adding, “The Indian Navy has hosted on the website a request for information for more than 100 Naval utility helicopter in October 2014. No Request for Proposal has been issued, therefore the question of permitting Agusta Westland to bid for the Naval utility helicopter in April 2015 does not arise. The government is exploring whether their manufacturing can be pursued under “Make in India”.”

“Individuals in some quarters have even gone to the extent of ascribing intent to the technicalities of the CAG audit of the state governments of Rajasthan and Chhattisgarh,” the government said.

Karnataka rains: 17 houses damaged, one injured by lightning in Udupi