VELLORE | CHENNAI: On the second day of their electioneering for the August 5 Lok Sabha election from Vellore constituency, both the AIADMK leader and Chief Minister Edappadi K Palaniswami and the DMK president MK Stalin stepped up their campaign heat, in a clear indication that stakes are high for both parties.

Campaigning in Gudiyatham and nearby places in Vellore district for the AIADMK-alliance candidate AC Shanmugam of the New Justice Party (NJP), Mr Palaniswami charged Mr Stalin with “trying to topple” the AIADMK government somehow, but such efforts will not succeed as “the people and God are with us.”

Expressing confidence that the AIADMK will again return to power in Tamil Nadu in the 2021 Assembly elections also, Palaniswami said that while the AIADMK is “a movement striving for the welfare of the people, the DMK is a family-centric party.” “Stalin is unable to come to terms with the fact that a farmer is the Chief Minister,” said Palaniswami.

Listing the various welfare measures being implemented by the AIADMK regime, M. Palaniswami said, “Every section of the people are benefitting from our development schemes and we will protect farmers’ interests in particular.”

He cited how the percentage of students’ enrolment under AIADMK in higher education has gone up to 48.60 per cent in the last eight years, in contrast to the enrollment level of 32 per cent during the previous DMK rule. 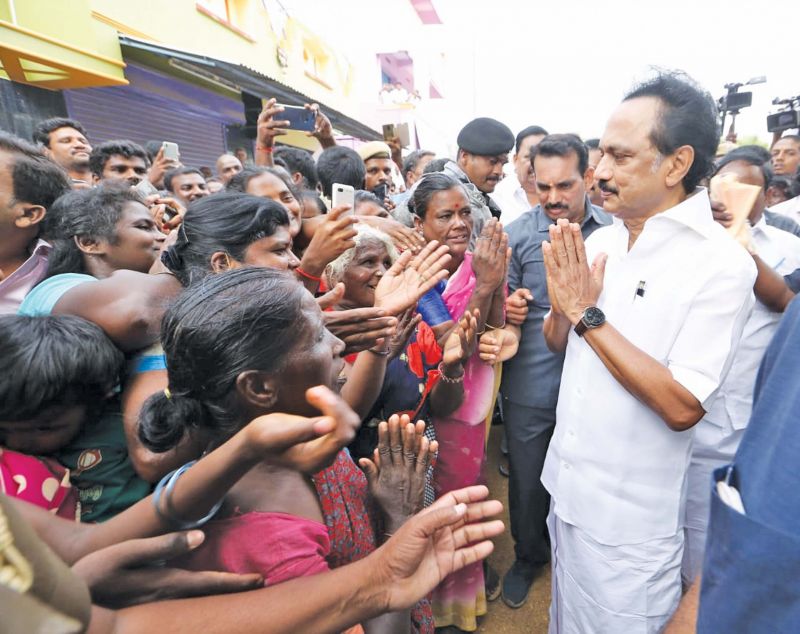 Taking a dig at Stalin paying homage to late President APJ Abdul Kalam on his fourth death anniversary on Saturday, Mr Palaniswami expressed surprise at this change of attitude to Kalam on the DMK's part.

Pointing out that it was the late AIADMK Supremo J Jayalalithaa who was among the leaders who supported Dr Kalam to become the President of India, and AIADMK MLAs' and MPs' had voted for Dr Kalam then, he said the DMK on the contrary did not vote for Dr Kalam. The late DMK leader M Karunanidhi had derided Kalam as 'trouble-maker', he noted.

Assuring that the interests of the Minorities will be protected by the AIADMK -Vellore constituency has a sizeable Muslim population - Mr. Palaniswami said his government will consider the demand by the Vellore people for holding 'Erudhu Vidum Vizha (a variant of Jallikattu) in the district, after the parliament election.

Demand to make KV Kuppam a new taluk will be considered, he said. LAW AND ORDER TURNING WORSE, SAYS STALIN

Launching his counter-offensive during the Vellore poll campaign, Mr. Stalin alleged that contrary to Mr. Palaniswami's claims, the law and order situation in Tamil Nadu was deteriorating rapidly. “Not a day passes without burglaries, chain-snatchings and murders,” he said campaigning for the DMK candidate, Kathir Anand in areas of Vaniyambadi and Vellore town on Sunday.

The sordid episodes that have come out in the 'Pollachi sex scam' are sufficient proof of the worsening law and order scenario in the state, Stalin charged, adding that the latest instance of a gruesome murder in daylight was that of the former Tirunelveli mayor, her husband and their housemaid.

Expressing confidence that the DMK will win the Vellore Lok Sabha seat also, as it swept the polls in April, Mr Stalin attributed the cancelling of the poll in April to the ruling dispensation's machinations, with help of the EC and the I-T department to bring disrepute to the DMK “so that it could lose all over the state.” Kathir Anand should have gone to Lok Sabha along with the 23 DMK MPs', but “they cancelled the poll then as part of a conspiracy.”

But people did not approve of that smear campaign and gave a resounding mandate to DMK, he said.

Rejecting Mr. Palaniswami's claim that the AIADMK had earned a quality stamp of approval like 'ISI mark' for its governance, Mr. Stalin said the ruling government “seems to excel only in charges of corruption and scams like Gutka”. Whenever the next Assembly elections are held, the DMK was confident of coming back to power in Tamil Nadu winning over 200 out of 234 seats, he added.