From United States to reclaim family legacy in public service

DECCAN CHRONICLE. | GOKUL VANNAN
Published Apr 29, 2016, 8:02 am IST
Updated Apr 29, 2016, 8:07 am IST
Keen on keeping up the family tradition of serving the people, Thiagarajan has ambitious plans for the development of Madurai.

PTR’s wife Rukmani blesses her son P. Thiagarajan before he leaves for campaign in Madurai Central Assembly constituency, in front of his father’s photo at their residence in Madurai. (Photo: DC)

Madurai: A former Investment banker who survived the 9/11 attacks on the Twin Towers when working with Lehman Brothers is now in Madurai to reclaim the political legacy left behind by his illustrious father PTR Palanivel Rajan.

After seeking the blessings of Madurai Meenkashi Amman at her abode, 49-year-old P. Thiagarajan, accompanied by his aged mother Rukumani, filed his nomination papers on Monday. 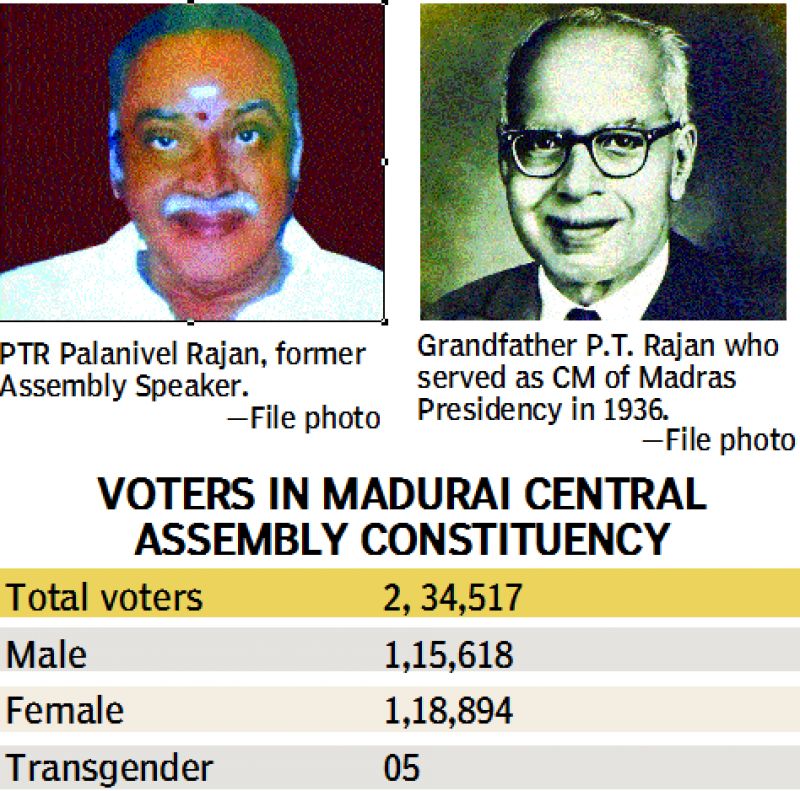 Supporters of his late father, who still talk glowingly about the various project that Palanivel Rajan, Speaker of the Assembly and state minister, brought to the temple city. Keen on keeping up the family tradition of serving the people, Thiagarajan has ambitious plans for the development of Madurai.

“As an investment banker, I am sure global investors will come to Madurai if we manage to formulate a master plan for infrastructure development that can attract them,” Thiagarajan told Deccan Chronicle.

Having returned from the US to contest in his father’s Central Madurai assembly constituency, 10 year after his death, Thiagarajan, who is facing AIADMK’s Jayabal and DMDK’s Sivamuthukumar, is highly conscious of the legacy of his father and grandfather PT Rajan, a prominent leader of Justice Party, who was CM of Madras Presidency in 1936.So are the local people.

“Thiagarajan is from a rich and respectful family, he will definitely work for the betterment of the downtrodden and be free of corruption,” said Rajan (48), a street vendor at Kazimar Street, who was poring over colourful pamphlets being distributed as part of the campaign.

“We are facing problems from rowdy elements in the constituency and corrupt politicians have not taken any steps in the last 5 years to improve the basic amenities here,” said a group of women. They expressed the hope that the candidate from the US will make a difference.

The constituency, in which the world famous Meenakshi Amman temple is located, doesn’t have proper roads, underground drainage system and drinking water facilities. Many foreigners visiting the temple have complained about the poor infrastructure,” said Ramesh a businessman from South Chithirai Street.

“We are hopeful of PTR’s son developing Madurai,” said members of the business community, referring to his main promise in the pamphlet - “I will strive hard to fulfil my father’s dream to work for the overall development of the temple city.”

With drumbeats heralding his arrival, Thiagarajan steps out of the car early in the morning with a broad smile and with folded hands saying `Vanakkam Vanakkam’ he greets people who have gathered at Kazimar Street, a predominantly Muslim area.

Dressed in white with only a DMK towel around his neck, he walks through the lanes to have a direct connect with voters as DMK functionaries, walking ahead of him, raise the slogan: `PTR son has come, asking for votes’.

He stops to receive the blessing of elders, most of whom introduce themselves as his father’s close friends. He obliges youth wanting to take selfies with him. Voters enjoy listening to his highly accented Tamil, mixed with English words.  Thiagarajan, who had done his MBA at MIT Sloans School of Management, feels there is not much difference between business and politics.

“The fundamental problem Madurai faces today is lack of planning. Though it is the oldest city with a glorious history dating from the Sangam Age, its infrastructure is struck with the past. The population has grown manifold and traffic congestion is a problem that many European countries faced many years ago,” he said, adding, ‘they managed to solve the problem through proper planning, while we are yet to fix it’.

“My father facilitated the development of ring roads, construction of four bridges, cleaning up of the Vaigai River and starting of the Madurai bench of Madras High court. But things have not improved after him, he said. “My main focus would be to bring Metro rail, introduce walker zones and construct multi-level car parking in the city to reduce the traffic congestion. Then I will focus on improvement of sanitation facilities,” said Thagarajan, whose ambition is to make Madurai like Singapore.

His mother Rukumani, who has been keeping the memory of her late husband alive in the minds of the local people through her social interactions in the past 10 years, hopes that her son has the blessings of Goddess Meenakshi Amma to inherit PTRP’s mantle.

Photograph of CRPF commando captured by Maoists is one year old; could be a ploy