Nitish ‘betrays’ Mahagathbandhan for BJP, to be sworn in as CM today

Bihar Chief Minister Nitish Kumar unexpectedly resigned on Wednesday, but hours later joined hands with the Bharatiya Janata Party (BJP) to reclaim the government in a stunning political manoeuvre that relegated his alliance partner RJD to the Opposition.

The ostensible reason for Kumar to quit was his falling out with Deputy Chief Minister Yashaswi Yadav, the son of Rashtriya Janata Dal (RJD) supremo Lalu Prasad. Yadav is facing corruption charges but had refused to step down despite Kumar's exhortations.

"In the circumstances that prevail in Bihar, it became difficult to run the grand alliance government," Kumar said outside Raj Bhavan after submitting his resignation to Governor Keshri Nath Tripathi.

But in a series of fast paced developments that unfolded over the next few hours it became clear that Kumar was going to be the ultimate winner.

First, Prime Minister Narendra Modi praised him for his "honesty" in standing up to corruption. Then the BJP said it would support him, and its legislators met Kumar's Janata Dal (United) (JD) (U) MLAs.

After the meeting, Kumar, accompanied by senior BJP leader Sushil Kumar Modi drove to Raj Bhavan to stake claim to form the government.

Modi later told journalists that a list of 132 MLAs supporting the alliance was submitted to the governor who has invited Kumar to form the government. These include 71 of JD(U), BJP 53, RLSP 2, LJP 2, HAM 1 and three Independents.

He said the swearing-in ceremony will be held at 10 am on Thursday. It would be Kumar's 6th term as chief minister.

The JD(U)-BJP combine will now return to power after four years in the politically volatile state. Prodded by Kumar, the JD(U) had walked out of the NDA in July 2013 after Narendra Modi was nominated head of the BJP's campaign committee for the 2014 Lok Sabha polls.

However, the RJD appeared in no mood to give up without a fight, with Tejaswi Yadav saying he, too, would stake claim to form government.

"Have sought appointment with the governor. Will stake claim to form government as the the single largest party. Will also get the support of JD(U) MLAs who have won after defeating BJP candidates," Tejaswi tweeted.

We are going to governor house to stage the dharna if not called for being the single largest party.

Half of JDU MLAs in our touch therefore Nitish Ji rushing to Raj Bhawan in midnight. Listen the inner voice of ur MLAs also

However, the numbers are stacked against him. The JD(U), BJP, their allies and supporting independent MLAs together account for 132 seats in the 243-member Bihar Assembly, 10 more than the magic figure of 122. 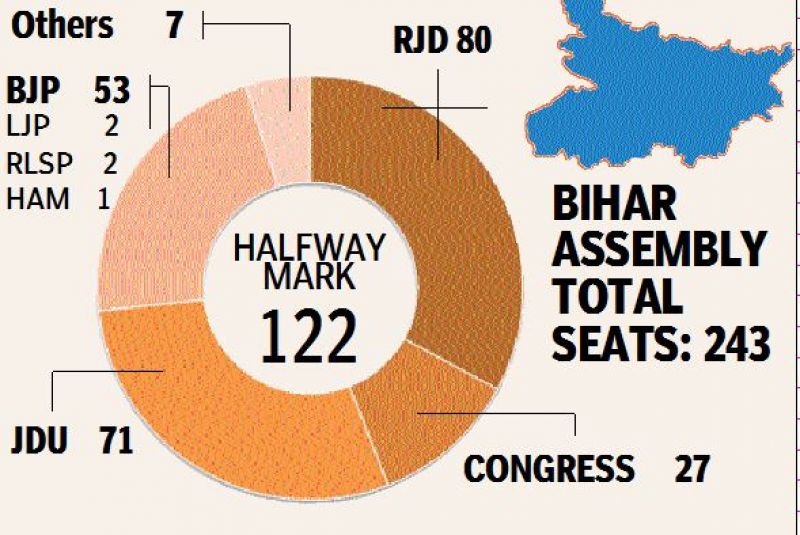 Reacting sharply to the governor inviting Nitish Kumar for the swearing-in at 10 am after giving him an appointment for 11 am, Tejaswi said RJD would stage a dharna outside Raj Bhavan against it.

"Governor gv us time of 11AM and now suddenly has asked NDA for oath ceremony at 10AM. Why so much hurry & rush Mr. Honest & Moral?" he tweeted well past midnight.

"If Nitish Ji is proud of his moral values & honesty, He would not had been in midnight rush to stake claim for govt. Honest man doesn't fear," he said in a series of tweets.

Nitish Ji if u hv belief in ur morality & honesty thn Y u hv caged JDU MLAs in ur https://t.co/0XdOQXDH8T thm,they wil tell ur morality rate

He claimed half of JD(U) MLAs were in touch with him which forced Kumar to rush to Raj Bhavan at midnight to stake claim to form the government.

Earlier, citing irreconcilable differences with the senior ally over corruption charges against Tejaswi, son of Lalu Prasad, Kumar announced his resignation after meeting

Kumar's resignation capped days of stand-off between his party JD(U) and the RJD, with the former insisting that Tejaswi defend himself against the allegations.

Tensions simmered between the two alliance partners ever since the Central Bureau of Investigation (CBI) registered a case against Lalu Prasad, his wife and former chief minister Rabri devi and son Tejaswi in a land-for-hotels case.

The offence was allegedly committed when Lalu was the railway minister in the United Progressive Alliance (UPA) government. He was allegedly instrumental in handing over the maintenance of two hotels of Indian Railways-owned PSU ICRTC to two Patna businessmen in return for a prime plot of land in the Bihar capital where his family is now constructing a shopping mall.

As suspense mounted over Kumar's next step following his resignation, BJP quickly seized upon the opportunity to reunite with its old ally, with Prime Minister Narendra Modi praising Kumar for "joining the fight against corruption", saying the entire nation supports his honesty.

Kumar responded quickly tweeting: "I thank the prime minister from the core of my heart for praising my decision (of quitting)."

The state and central BJP leadership swiftly got in touch and Sushil Kumar Modi, who was Kumar's deputy when the two parties ran a coalition government, said his party was not in favour of a mid-term election.

Modi said BJP has decided to back the JD(U) leader in forming the next government and will be a part of it.

The development has left Tejaswi out of the government, and his father emasculated, at least for now.

Earlier, after putting in his papers, Kumar he had favoured Opposition unity but that was not possible when it only had a "reactive agenda".

"I favoured opposition unity...but what kind of Opposition unity was going to be there...there was no discourse, no agenda. Having a reactive agenda will not do," he said.

"Needs can be met, but not greed," he said, apparently referring to graft charges against Tejaswi and other members of Lalu Prasad's family.

Kumar also said that while supporting demonetisation he had called for a crackdown on benami properties and that he cannot back out now.

Several members of Lalu Prasad's family, including his MP daughter Misa Bharti and son-in-law Shailesh Kumar, are embroiled in cases related to possessing benami properties (immovable properties not registered in the name of the real owners) bought with tainted money.

Laad Bazar to get a heritage makeover