The former finance minister and veteran BJP leader, who took his breath on Saturday afternoon at New Delhi's All India Institute of Medical Sciences (AIIMS) would be cremated with the state honours later in the day. (Photo: File)

New Delhi: The former finance minister and veteran BJP leader, who took his breath on Saturday afternoon at New Delhi's All India Institute of Medical Sciences (AIIMS) was cremated with full state honours at 3:15 pm here on Sunday.

His funeral procession was attended by senior political leaders, dignitaries and numerous party workers. He was cremated at Nigambodh crematorium on the banks of the Yamuna river.

The funeral was also attended by other Union ministers, chief ministers of various states, Opposition leaders and senior political figures.

The body was kept at the BJP headquaters till 1 pm on Sunday for the party workers and leaders to pay tributes.

Earlier the BJP had tweeted that the last rites would take place at 2:30 pm today.

On Saturday, the hospital finished embalming Jaitley’s mortal remains by 2.45 pm. Later, around 3.15 pm, an ambulance with the remains left for Jaitley’s residence. Within an hour of the announcement of his death, the hospital was thronged by Jaitley’s family, friends and well-wishers from not just the political fraternity but also the legal profession and other fields.

Hundreds of leaders from across political spectrum visited his south Delhi home last evening to pay their last respects. 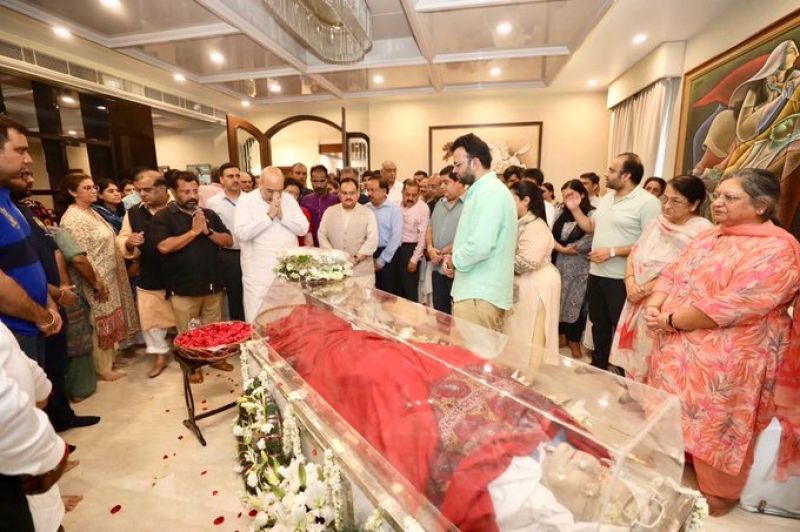 The crowd swelled after the world of Jaitley’s death spread. Most of them were the attendants of patients who wanted to catch a last glimpse of him. The guards had a tough time dispersing the crowd near the cardio-neuro tower.

Prime Minister Narendra Modi, who was in Bahrain on Saturday, turned emotional at an event as he remembered his "friend", Arun Jaitley. "I can't imagine that I am so far here while my friend has gone away. Some days ago, we lost our former External Affairs Minister Behen Sushma Ji. Today I have lost my friend Arun," he added.

Jaitley was admitted to the cardiac intensive care unit (ICU) of the Cardiothoracic Neurosciences Centre at AIIMS on the morning of August 9. His condition had been critical, and he was being treated by a multi-disciplinary team of specialists from the departments of cardiology, endocrinology, pulmonology and nephrology, among others.

Jaitley was initially admitted for a check-up after he complained of uneasiness but his condition kept deteriorating, and he was put on a life-support system. However,

Jaitley has had a history of medical conditions, including diabetes and kidney failure.

The senior BJP leader's health issues became worse after he had a kidney transplant in May last year.

Jaitley held the finance and defence portfolios, and often acted as the chief troubleshooter of the government. During his tenure as finance minister, he led the enactment of a bankruptcy code and the Goods and Services Tax or GST.

Jaitley, who had been an important part in PM Modi's cabinet in the BJP government's first term, did not contest the 2019 Lok Sabha election presumably because of his ill-health.

Despite defeat, Didi to take oath as CM on May 5, meets Governor for govt formation

DMK leads in 118 seats, minimum for a simple majority in Tamil Nadu Assembly