Stood like a rock: BJP's Kumaraswamy expresses gratitude in letter to Amit Shah

'I extend my heartfelt congratulations & best wishes for the support extended by your good self, other leaders of the party & party in general,' read the letter. (Photo: File)

"I extend my heartfelt congratulations & best wishes for the support extended by your good self, other leaders of the party &party in general," read the letter. 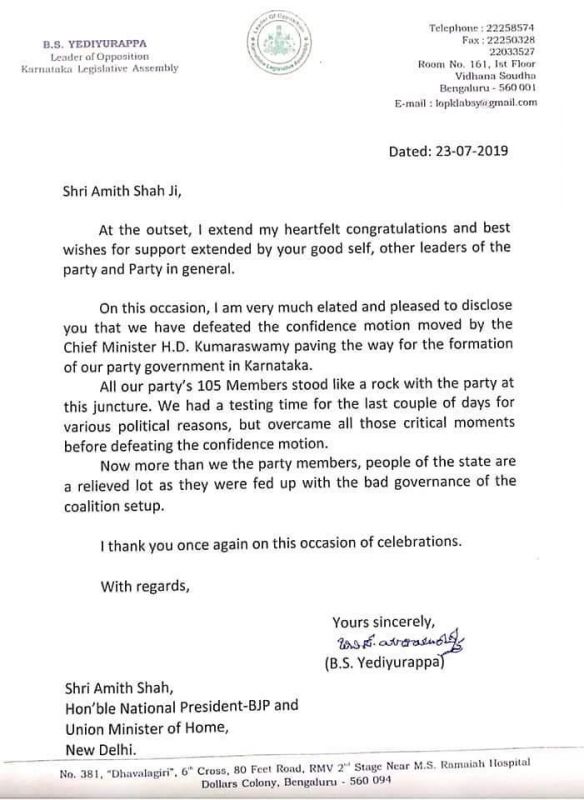 BJP leader Kumaraswamy in a letter to Party president Amit Shah expressed his gratitude after they won the trust vote. (Photo: Twitter I ANI)

"On this occasion, I am very much elated and pleased to disclose that we have defeated the confidence motion moved by the Chief Minister HD Kumaraswamy paving way for the formation of our party government in Karnataka," further read the letter.

"All our party's 105 members stood like a rock with the party at this juncture. We had a testing time for the last couple of days for various political reasons, but overcame all those critical moments before defeating the confidence motion," it read.

"Now more than we the party members, people of the state are relieved lot as they were fed up with the bad governance of the coalition set up," said Yeddyurappa.

The 14-month-old Congress JD(S) coalition government in Karnataka fell on Tuesday after it was defeated on the floor of the Karnataka Assembly with about 20 MLAs of the ruling coalition defying their party whips and absenting from voting on the confidence motion moved by Chief Minister HD Kumaraswamy.

Immediately after the vote, Kumaraswamy sought an appointment with Governor, Vajubhai Vala and went to Raj Bhavan to submit his resignation. The Governor accepted the resignation.

The defeat marks the end of an uneasy coalition that was formed after the assembly polls on May 23, 2018, which returned a hung verdict after three main parties in the state- Congress, BJP and the JD (S) fought each other in the polls.

There were differences between the coalition partners that often came to the surface but they carried on against the threat of BJP.

Shiv Sena questions Centre, asks whether India is not 'self reliant' at present

Other states unwilling to take back migrants stranded in Maharashtra: Thorat