Concerns in saffron camp for 2019 polls

Bengaluru/New Delhi: The sky over Vidhana Soudha may have been overcast on Wednesday afternoon, but on the ground there was much bonhomie and camaraderie as the swearing in of the JD(S)-Congress coalition government in Karnataka virtually turned into a show of strength by leaders of parties out to counter the Modi-led National Democratic Alliance at the Centre in the 2019  Parliamentary elections.

With the cloudy skies threatening the outdoor function, there was talk of the venue being shifted indoors, but finally three canopies were erected to protect the VVIPs from the rain, which started at 2.30 pm and stopped by 3.15 pm, before the event could begin. The weather, however kept onlookers away and the crowd was much thinner than expected.

But the cloudy weather in no way dampened the mood of the leaders of the various parties, who were seen talking to each other, exchanging pleasantries and holding hands.

The formation of  JD(S)-Congress government in Karnataka seemed to have paved the way for the Opposition parties coming together to try and halt the Modi-Amit Shah juggernaut ahead of 2019 polls. 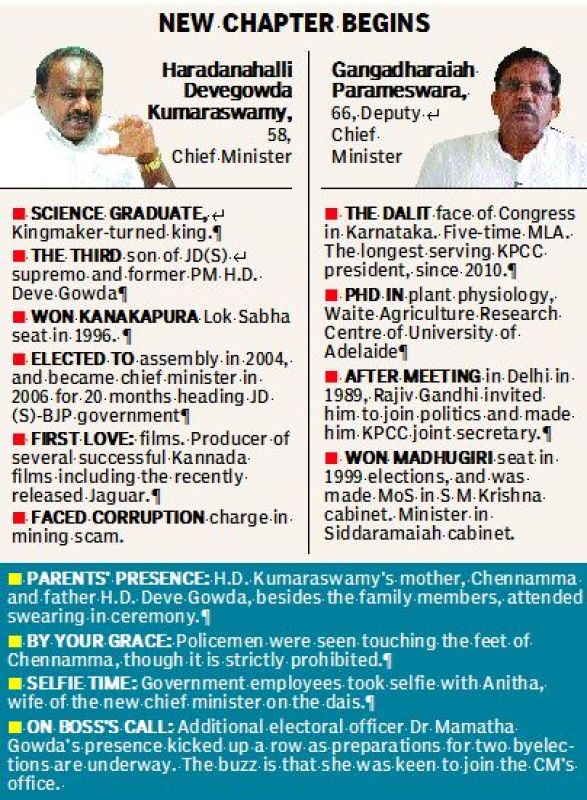 There were concerns in the saffron camp as the development could possibly be the beginning of a broad-based anti-BJP platform, which they felt “does not augur well for the party.” It was pointed out that despite the Prime Minister, Mr Narendra Modi being the prime vote catcher for the party, the Gujarat election results have indicated that his “charisma was not enough to take on an united Opposition.”

Even as the BJP managed to cross the 100 mark in Karnataka, piggybacking on Modi, numbers were “not enough” to form government on its own. It was further pointed out that coming together of SP-BSP during the Gorakhpur Lok Sabha by-poll dislodged the BJP from the UP CM Yogi Adityanath’s bastion after two decades.

India, UK to conduct clinical trials of Ashwagandha for promoting recovery from Covid

Muslims will face no loss due to CAA: RSS chief