Chennai: The much awaited RK Nagar byelection was  converted into a mega medical camp by city  corporation officials as paramedics of the public health department had transformed more than 25 polling stations into  medical camps.

Women and the aged who thronged in large  numbers had a brief  session in those medical camps, which had a  doctor, paramedic and an assistant. “We have given medicines also for skin ailments, allergies and vomiting. Cetrizine and ORS (Oral salts) were given for those suffering from allergy and  dehydration,” said a city corporation doctor  stationed at Cheriyan Nagar polling station.

The medical team engaged the voters by distributing 15 kinds of basic medicines to those suffering from symptoms of fever, cold, body-ache and dehydration. “Most numbers of voters with symptoms of fever, cold and infection were stopped by at the camps. We  provided them with free of cost Amoxicillin,  paracetamol and diclofenac medicines,” another doctor posted in a camp said. The attendants also registered names, age and symptoms of the  voters who visited camps. 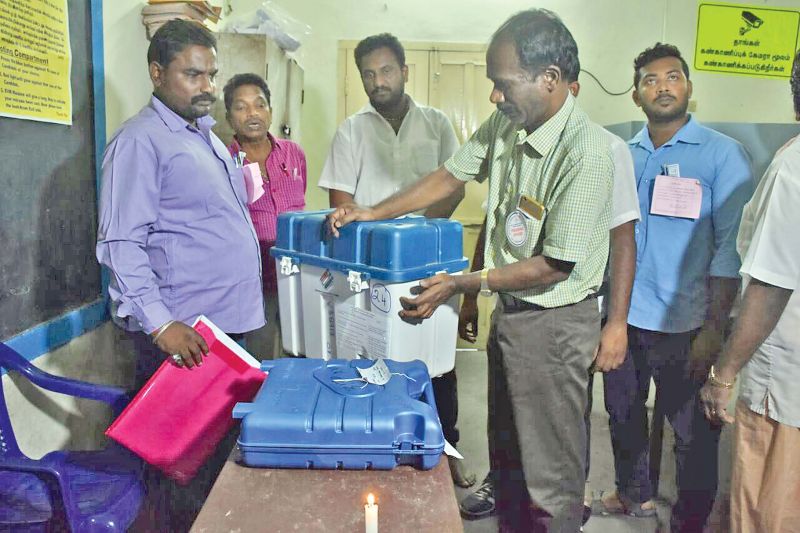 TTV camp cries foul over disarranged ballot units
Polling officials drew flak from rebel AIADMK TTV Dhinakaran’s supporters for bad positioning of ballots units. A simple mathematical error left presiding officers in polling booths and election officials baffled and embarrassed as TTV Dhinakaran’s supporters cried foul. “We have told elderly and illiterate voters about the placement of TTV Dhinakaran’s name in the number 33rd position which will be the first button in third ballot unit. If they really wanted to vote for us, they could do without  confusion. But to confuse our voters, election official  intentionally disarranged the ballot units putting the ballot unit TTV name in the second position,” said a supporter.

Women and the aged who thronged in large numbers had a brief session in those medical camps, which had a doctor, paramedic and an assistant.