No candidate shall be permitted to make use of printed posters or printed material for canvassing.

Hyderabad: Student union elections, which are held across the state every year, are a mirror of the general elections. There is intensive campaigning for these elections funded by the parent political parties, with the usual accusations and counter-accusations, allegations of bribery, and distribution of freebies.

The issue of students doing course after course just to participate in the elections was one of the many issues  that impelled the ministry of human resources development, under the direction of the Supreme Court, to appoint the Lyngdoh Committee to examine and recommend on certain aspects of student body and student union elections.

The committee submitted its ‘guidelines/recommendations for student union elections’ in 2006. One of its recommendations was that not more than Rs 5,000 be spent per candidate on the campaign, but this limit is grossly overshot.

“The ABVP had reportedly given students packets of biryani and beer on the eve of the elections last year,” said a student. “There were allegations that their campaigning was done in zoom cars. They also held a cultural event with competitions just before the elections with huge amounts of prize money given to students. This kind of campaigning should be made unacceptable. The funds could be put to better use.”

The election commission, consisting of faculty members, sanction posters and notices. They say that the bills they receive are rigged. A check is done only when a complaint is received. They claim that it is hard to douse the heightened election fervour in campuses.

Candidates who have had to face disciplinary charges from the university are flouting the norms, and use their defiance as a badge of honour in their campaigns. Syed Amin, a student, says, “If a leader (candidate) undergoes pressure and receives flak from the authorities that shows how good he/she is.”

Another rule that is flouted is one that decrees campaigning must end the day before the elections. But chits with the names of candidates are handed out near polling booths on the day of the election. 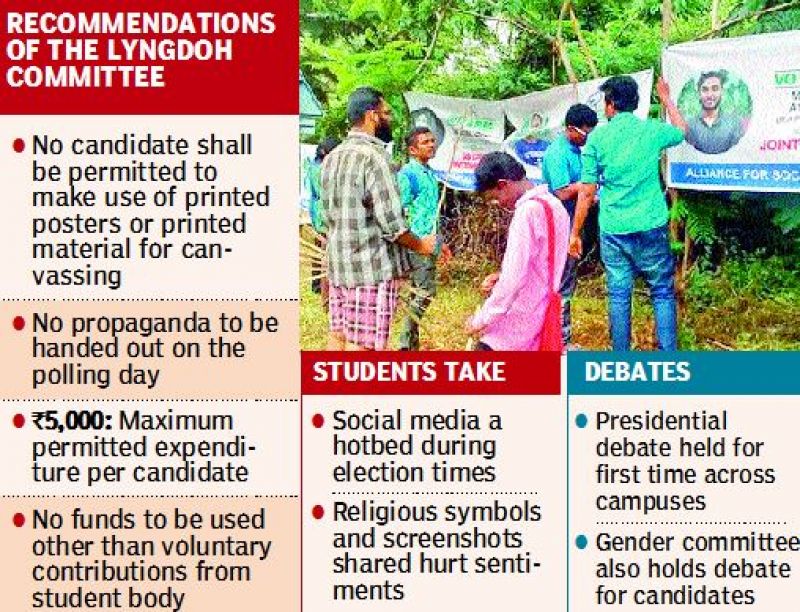 In July 2016, a National Green Tribunal order prohibited more than two posters on campus, and stipulated that the posters should be hand-made. Rafiha Afi, a student of UoH says, “The campus is filled with posters for the elections to be held on Wednesday. A few are hand-made but we also have colour banners across the campus with photographs of the candidates. This easily proves the money thrown into campaigning.” Across the UoH campus, posters with photographs of candidates of the Alliance for Social Justice can be seen. The Lyngdoh Committee recommendations also stated that campus buildings should not be defaced.