Jaya and Mamata are back, BJP wins 1, Congress loses 2

New Delhi: BJP has won Assam with a thumping majority and expanded its footprint in states where it has been an outsider. Two formidable women made a comeback today, but the story reads grim for Congress.

With the win in Assam, the BJP has stepped into a traditional Congress bastion – the Northeast. The party has broken more new ground, in Kerala where it has opened its account with one seat and in West Bengal, where it hopes to get a stronger foothold.

In Assam, the BJP did not thrust its national leadership on the electorate – a lesson it may have learnt from its crushing defeats in Delhi and Bihar last year. The BJP had projected local leader Sarbananda Sonowal as the chief ministerial candidate throughout the campaign.

The Congress has blamed anti-incumbency for its loss in Assam. It has been in power for three terms. But it also failed to read the writing on the wall when Hemanta Biswa Sharma stomped out of the party to join the BJP last August. They could have wiped out some of the anti-incumbency sentiment by removing Tarun Gogoi from the chief minister’s chair, analysts feel.

It is Mamata Banerjee, however, all the way in West Bengal as she prepares to take charge a second time. The Left Front continues to be in decline in the state because it hoisted its campaign on some primetime Mamata bashing. And then there was the disastrous alliance with the Congress -- which some analysts are calling another 'historic blunder'. The Left has also failed to put forward new faces or new narratives.

The AIADMK has comfortably won in Tamil Nadu and here is some history in the making -- J Jayalalithaa will be the first leader to be chief minister for two consecutive times since 1984. The DMK-Congress’ alliance of opportunity has failed in the state. Analysts say the DMK's alliance with the Congress cost the party as Congress lost most of the 41 seats it contested.

However, since the DMK combine is set to win over a 100 seats in the 234-seat Assembly, this is the first time in the history of Tamil Nadu that there will be a strong Opposition.

The Left has won Kerala as predicted by most exit polls. Outgoing chief minister Oommen Chandy's big-ticket projects and 'development with care' slogan did not work at all. At the end of the day, corruption and sleaze did the Congress in.

The only good news for the Congress is from Puducherry (formerly Pondicherry) where it is set to gain power in alliance with the DMK.

Modi, further, termed BJP's victory in Assam as ‘historic’ and ‘phenomenal’ and said the party will do everything possible to fulfil the dreams and aspirations of the people of the state and take its development journey to new heights. 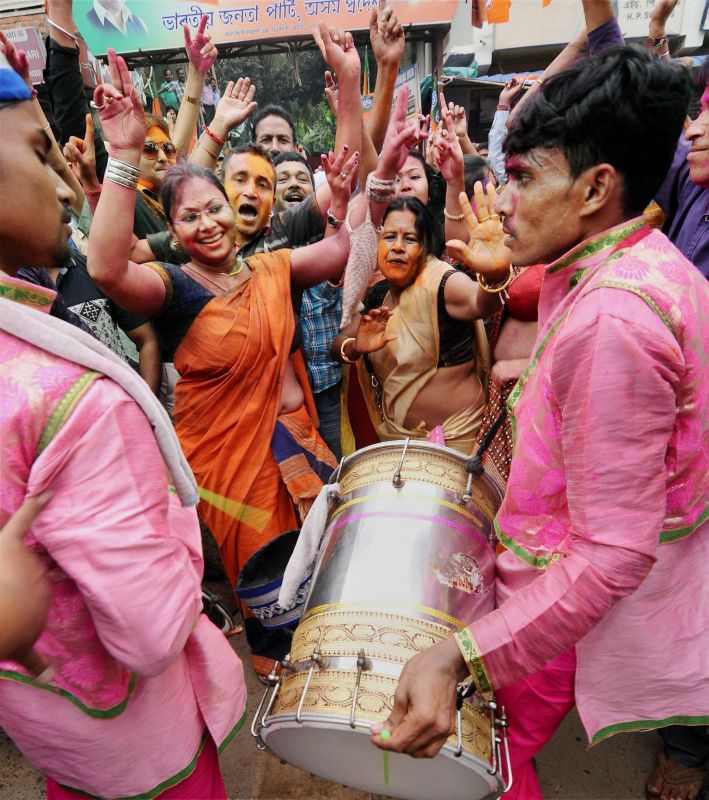 He also lauded the efforts of BJP workers in West Bengal and Tamil Nadu, saying they put up a ‘spirited performance’. "Across India, people are placing their faith in BJP and see it as the party that can usher in all-round and inclusive development," Modi said.

Bucking tradition, the Jayalalithaa-led party was well on way to retaining power for a second term in a state which had not returned a ruling party to power since 1984. But it was also not a washout for the opposition DMK, which put up a reasonably good show by leading in 105 seats as against AIADMK's 126 in a house of 234.

The Congress was ahead in 10 seats and IUML, a DMK ally, PMK and PT were leading in one seat each. The third front of parties headed by Vijaykant's DMDK has failed with even the actor himself trailing in his seat.

Jayalalithaa is leading by over 16,000 votes in Dr RK Nagar constituency, ahead of DMK rival Shimla Muthchozhan.

Captain Vijayakanth continued to trail in Ulundurpet Assembly constituency and the 'Third Front' led by him also failed to breach AIADMK bastions. The DMK-Congress alliance, mired in corruption scandals, failed to win back voters and lost ground as AIADMK made inroads into few of their traditional strongholds. 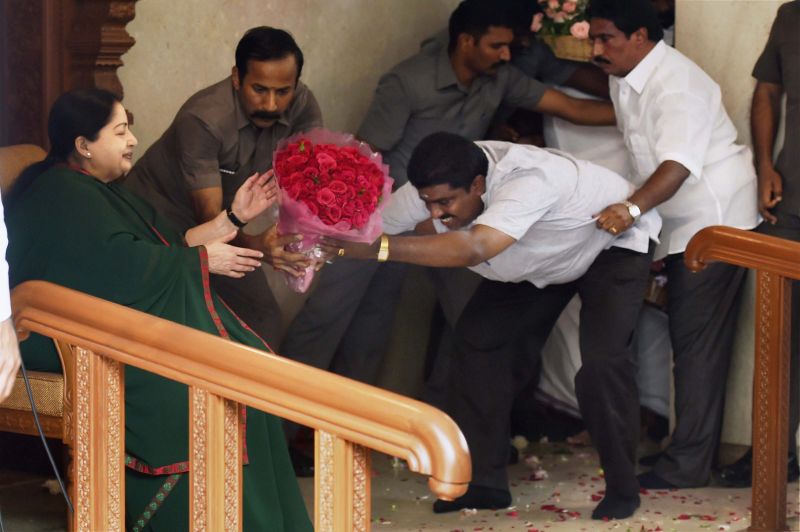 Jayalalithaa is greeted by a party cadre after AIADMK's win in the Assembly polls. (Photo: PTI)

After a narrow victory, Jayalalithaa termed the people's verdict as historic as against the ‘family rule’ of DMK. "This election has upheld true democracy shattering to pieces the campaign of lies of DMK. This election has put a permanent full stop to the family rule," she said in a statement as her party forged ahead in the counting of votes.

Expressing her heartfelt thanks to the people, she said they have handed her party "a historic victory" by voting her back to power. They had given her the honour of retaining power by an incumbent regime for the first time after 1984, she said.

AIADMK founder M G Ramachandran managed to successively win polls (1977-87) in Tamil Nadu and after that no other party managed to do it.

"There are no words in the dictionary to explain my sense of gratitude for the people of Tamil Nadu," Jayalalithaa, who took the gamble of virtually going it alone in the polls.

"I will forever be indebted to the people of Tamil Nadu who have reposed full faith on me and by making AIADMK emerge victorious in a big way," she said.

Vowing to fulfill all her electoral promises, 68-year old Jayalalithaa said she would work hard to make Tamil Nadu, the numero uno state in the country.

In Tamil Nadu, the AIADMK alliance won an absolute majority in 2011, sweeping to power winning 203 seats out of 234, while the DMK alliance which included DMK, Congress and other regional parties could muster just 31. The BJP did not open its account.

CPI(M)-led LDF regained power in Kerala cruising to a comfortable majority by inflicting a massive drubbing to the ruling Congress-headed UDF in the Assembly polls, which also saw BJP scripting history by opening its account in the state Assembly.

LDF won 91 of the 140 assembly seats at stake. The result of Wadakkancherry is yet to be declared officially where UDF candidate Anil Akkara has won by a margin of just three votes.

The Left Democratic Front (LDF) won 85 seats on its own and another six by independents fielded by the opposition front. 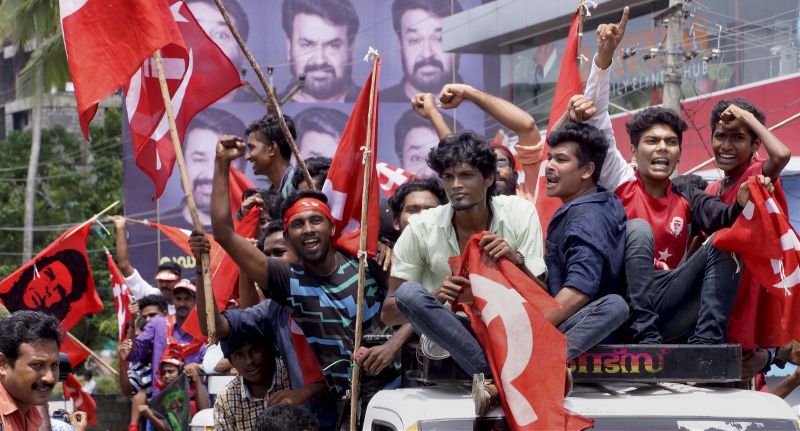 Congress-led United Democratic Front (UDF) had to bite the dust with a meagre 46 seats. While Chief Minister Oommen Chandy, former Finance minister K M Mani, who had to resign in the backdrop of bar bribery allegations, were among those who survived the LDF onslaught, four of his cabinet colleagues including K Babu, who also was under the cloud of bar scam, fell by the wayside.

Reacting to the massive defeat, Chandy said the results were a ‘setback’ and UDF would discuss in detail the results of the unexpected rout.

After a exceptional victory in the West Bengal Assembly polls, Trinamool Congress chief Mamata Banerjee will be sworn in as Chief Minister for a second term on May 27.

TMC is well poised to get two-thirds majority in the Assembly leading in 216 of 294 seats. The Left and Congress were ahead in 71 seats while BJP is leading in seven.

Mamata Banerjee dubbed the coming together of CPI(M) and Congress as the "greatest blunder" and said people had rejected the "canards" spread by the opposition against her.

Accusing the opposition of spinning a "web of lies" to grab power, Banerjee said politics in the state had hit a "historic low" during electioneering and there should be a "Laxman rekha" to maintain decency in public discourse. 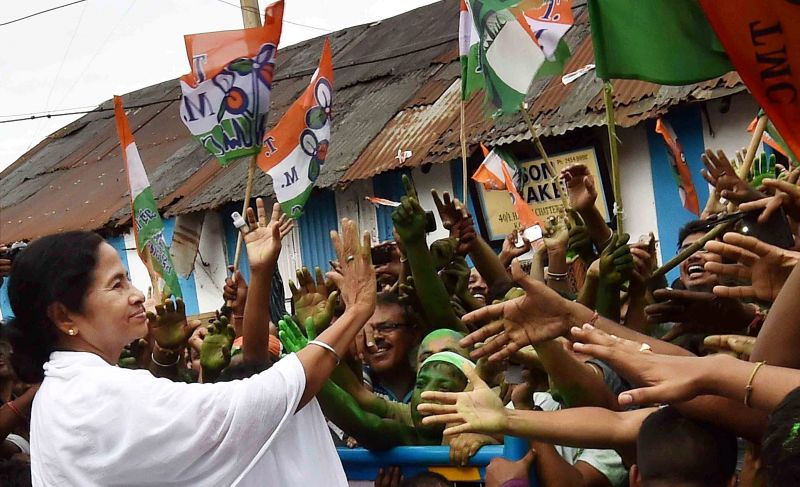 "People of Bengal have rejected attempts by the opposition to mislead them. The people did not like the way the opposition has spread canards against me in this election. It is not good for politics and democracy," she told reporters.

Referring to the charges of corruption against her party, she dubbed it as ‘propaganda’ by a section of media. There is no corruption in Bengal. Bengal is a corruption-free state. The people have rejected the allegation," she asserted.

"This is the magic of Ma-Mati-Manush. The people are very intelligent. They have given reply to the allegations levelled by the opposition," she continued.

Asked if she harbours the hope of getting a prominent national role in the 2019 Lok Sabha polls, she described herself as a less important person, saying, "I love my country and my motherland."

The results of the Assembly elections saw the end of Congress rule in Assam where it had scored a hat-trick in the last elections under Tarun Gogoi.

With Union Minister Sarbananda Sonowal as its Chief Ministerial face, the BJP and its allies AGP and Bodo People's Front scored a landslide victory.

The Congress, which had secured 78 seats in the last elections, was today victorious in 10 seats and was leading in 14 (total 24). The AIUDF, led by Badrudin Ajmal, won 3 seats and was ahead in 10 (total 13). 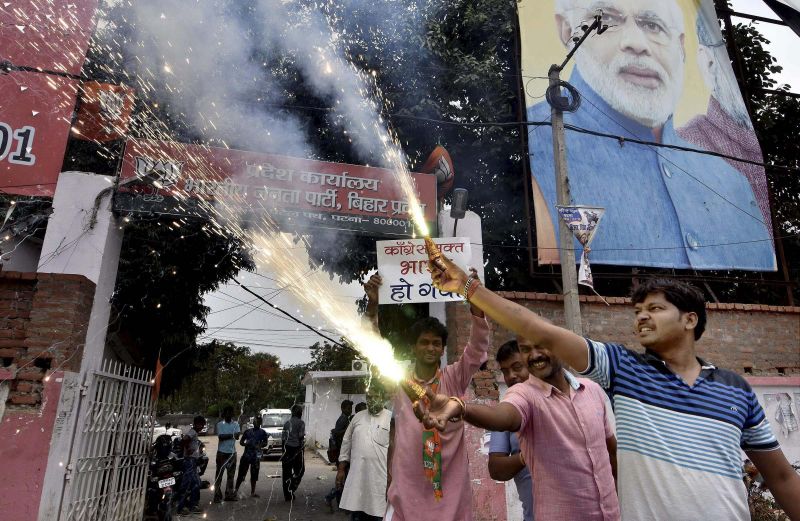 Gogoi accepted defeat with "all humbleness" and congratulated BJP leader Sarbananda Sonowal and his party for the victory. The veteran Congress leader termed BJP's victory as "grand success".

"People are now expecting a change for development and achche din (good days). They have high hopes from the new government. I wish BJP and Sonowal fulfil those," Gogoi said.

On Congress' performance in the election, the three-time chief minister said it was not easy to win for the fourth consecutive term. "I am not disheartened but of course I am sad and it is natural. Ups and downs are part of life and I have seen many ups and downs in my political life. People have not left us. We had faced worse defeat than this in the hands of AGP after the Assam agitation," Gogoi said.

"There must have been some deficiencies and mistakes. We will analyse those," he said.

In a consolation win of sorts for Congress, which faced defeats in Assam and Kerala, the party in alliance with DMK stormed to power in this tiny union territory, securing a simple majority of 17 in the 30-member assembly.

Congress avenged its defeat in the 2011 elections at the hands of AINRC founder N Rangasamy, who broke away from the national party to form his outfit and rode it to power, as the ruling party fell by the wayside bagging just eight seats.

Congress which contested 21 seats won in 15 seats. DMK emerged successful in two segments, giving the combine a clear majority as it bucked initial trends of a close fight with the AINRC when counting of the votes polled in the May 16 assembly elections was taken up. AIADMK, which contested the elections on its own, won four seats.

In Rajya Sabha, Opposition blames Centre for failing to act against COVID-19 on time

PMK resurrects demand for 20% quota for Vanniyars in Tamil Nadu

Finally, on Sept 30, we'll know who did (or did not) demolish the Babri Masjid

Ahead of Rajya Sabha deputy chairman poll, BJP issues whip to its MPs