DECCAN CHRONICLE. | J.V. SIVA PRASANNA KUMAR
Published Feb 19, 2019, 1:32 am IST
Updated Feb 19, 2019, 1:33 am IST
The American bombshell has sent shockwaves in the TN political scene with the DMK grabbing the issue as a potent poll weapon.

he company was asked to pay $25 million to settle a related civil case.

Chennai: The multi-million dollar Cognizant scam is all set to spiral into a major election issue in Tamil Nadu with the Opposition DMK and Congress all set to make it one of their prime campaign missiles in the ensuring Lok Sabha elections. 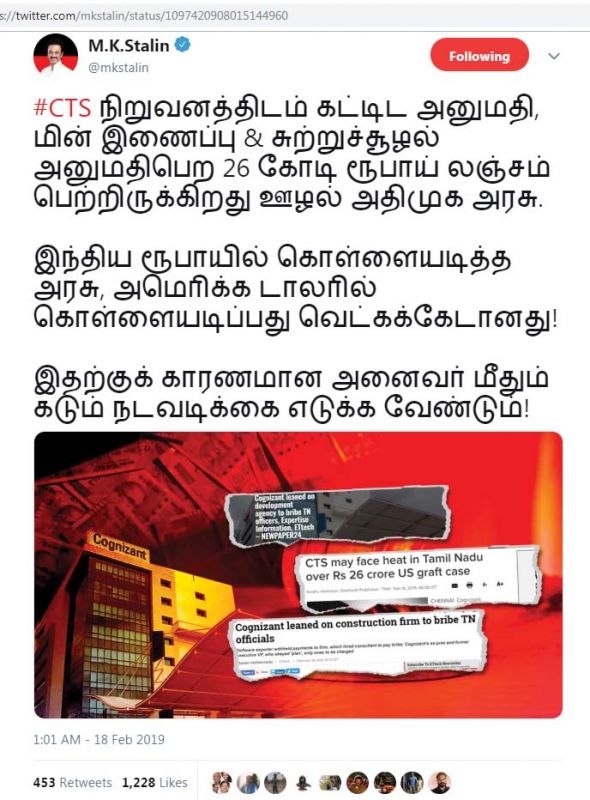 The US Justice Department had on Friday last announced criminal charges against two former Cognizant Technology Solutions Corp (CTS) officials for their roles in bribing of Tamil Nadu officials for obtaining building permits for the company's Chennai development centre in 2014. The company was asked to pay $25 million to settle a related civil case. A later report said the CTS had admitted paying the bribe and agreed to pay US$ 28 million to the US stock market regulator Securities Exchange Commission and its Justice Department to settle this case.

The American bombshell has sent shockwaves in the TN political scene with the DMK grabbing the issue as a potent poll weapon.

The party is readying a petition for the state vigilance and anti-corruption police to initiate a thorough probe and take stern action, sources said, adding that the DVAC petition would be the first step before moving an appropriate court for a CBI probe since the scam related to an US company bribing TN officials and the information had broken first from that country.

"This is a huge scam and a shameful one. We will certainly make this an election issue", said DMK spokesman TKS Elangovan, MP. "It would be impossible for the AIADMK leaders to plead that ours is a politically motivated charge devoid of proof and facts because this is a case probed and cracked by the US Justice Department and CTS has accepted the bribing".

DMK President MK Stalin on Monday demanded probe by the CBI with assistance from the Interpol to obtain the requisite evidence after registering a case against US-based Cognizant Technology Solutions for bribing Tamil Nadu government officials for securing construction permits for its Chennai development centre.

The Centre should assist the TN directorate of vigilance and anti-corruption (DVAC) to get all the evidence against Cognizant from the US courts, Stalin in a statement. The AIADMK government had brought a "permanent blot on Tamil Nadu in the global arena" by demanding and accepting bribe from Cognizant to give construction permits in 2014, he said.

He said it should not be assumed that the bribe was demanded and taken only at the official level "because it was the AIADMK ministers who order the officials to demand bribe for them".

"It is shameful that the government that had indulged in looting in Indian rupees has also looted in American dollars", Stalin tweeted, demanding stern action against all those involved.