AAP chief Arvind Kejriwal addresses after he was sworn-in as the Chief Minister of Delhi for the third time at a ceremony at Ramlila Maidan in New Delhi on Sunday. Newly sworn-in ministers Gopal Rai, Satyendra Jain, Manish Sisodia and Kailash Gahlot are also seen on the stage. (Photo: PTI)

New Delhi: Soon after he was sworn in as Chief Minister of Delhi for the third time, Aam Aadmi Party supremo Arvind Kejriwal on Sunday sought the

blessings of Prime Minister Narendra Modi and expressed his desire to work together with the Centre for the development of the national capital. Kejriwal said as the election was over, politics was also over and he has “forgiven” his opponents for the remarks made during the campaign.

At 12 noon, the moment Kejriwal climbed onto the dais to take the oath, a cheer rang through the crowd, that spilled outside the iconic Ramlila Maidan. One estimate put the crowd at over a lakh, with thousands milling on the streets.

The sprawling Ramlila Maidan had also served as the battleground for the 51-year-old bureaucrat-politician during the Anna Hazare-led India Against Corruption movement. It is the same venue where socialist leader Jayaprakash Narayan had addressed a massive gathering during the “Total Revolution” movement in the 1970s. Kejriwal is the first and only Delhi CM who opted for Ramlila Maidan as the venue for his oath ceremonies. All his predecessors had taken the oath at Raj Niwas.

Gahlot — Kejriwal began his address with “Bharat Mata ki Jai”, “Inquilab Zindabad” and “Vande Mataram”, and ended it by singing “Hum Honge Kamyaab” (We shall overcome), in which he was joined by thousands, waving the tricolour, banners and wielding jhadus (brooms).

Striking a conciliatory note after his stupendous victory in the Assembly polls by bagging 62 out of 70 seats, Kejriwal, whose earlier tenure was marred by many run-ins with the Centre, termed himself Delhi’s “son” and the “Chief Minister of all” people irrespective of the party they voted for.

He said, “I had sent an invitation to Prime Minister Narendra Modi for this event. He could not come, maybe he is busy at some other event. But through this platform, I want to take his blessings and say that I want to work with the Central government to develop Delhi and take it forward.”

The BJP had mounted its one of the most aggressive campaigns in the Delhi Assembly polls. Several BJP leaders had made controversial and even incendiary remarks against their rivals, prompting the Election Commission to take serious action like barring Union minister Anurag Thakur and BJP MP Parvesh Verma from campaigning. Verma in a public meeting had termed Kejriwal a “terrorist”.

The Chief Minister sought cooperation from his political opponents, saying he had “forgiven” them for remarks against him during the high-octane campaign.

He said, “Some people had voted for AAP, BJP and Congress during the polls. But from now on, I am everyone’s Chief Minister — irrespective of their political affiliation.”

Kejriwal said Delhiites had given birth to a new kind of politics in the country — which involves schools, hospitals, electricity, water, good roads and women’s security.

He said, “In the last five years, I have worked for everyone. I have never worked with bias. Today, the entire two-crore is a part of my family. Never hesitate to approach me, I will work for everyone. We still have a lot to achieve here. I want to work with everyone together.” 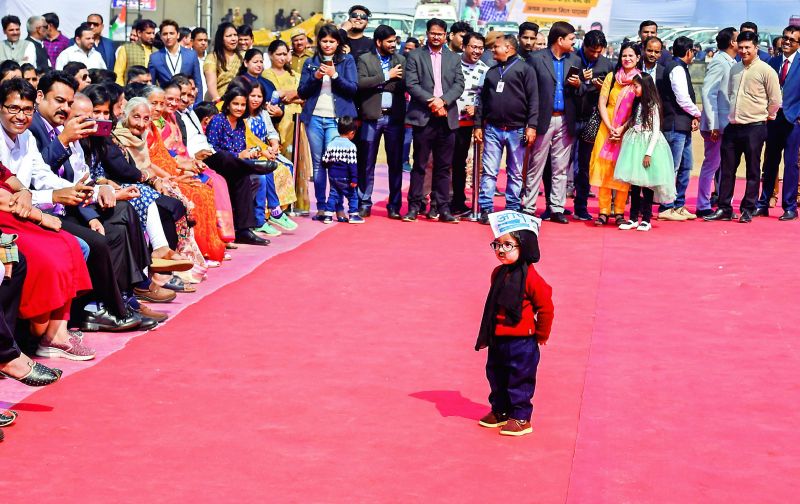 After Delhi resident Avyaan Tomar hogged the limelight by wearing an attire similar to that of the Aam Aadmi Party supremo during winters, several other similarly dressed children could be spotted on Sunday at Ramlila Maidan where Arvind Kejriwal took oath as the Chief Minister for the third time.

Avyaan, over-a-year-old, was pictured all dressed up in signature Kejriwal sweater, spectacles, AAP cap, sketched moustache and a muffler outside AAP headquarters on February 11, when the votes polled in the February 8 Delhi Assembly elections were counted. But he was not the only “Little Kejriwal” drawing attention and admiration of the crowd, as five more “Baby Mufflermen”, all belonging to the same family, added joy to the atmosphere.

One such child, Zaid Hussain, donning a Kejriwal attire, stood in a queue to enter the venue. “We have come here from Bawana. Kejriwal has done good work in our constituency. Kejriwal zindabad,” said his mother Ruksana Begum. Zaid obliged dutifully when she directed her son to repeat the slogan in favour of  Kejriwal.

The youngest among them, Abu Bakar, son of Sajid Mirza, 32, rode his father’s shoulders as he waved a big tricolour in his hands. “I am ‘Kejriwal’,” quipped Abu, when asked his name, and chanted, “Lage raho Kejriwal”.

You are a fighter who will overcome this challenge: PM Modi to Boris Johnson

India thanks UAE for providing shelter to Indians stranded in Dubai

KTR to Pawan Kalyan: Call me brother, not sir