The legislators are likely to move the court for contempt proceedings against Congress leaders as the top court has ordered a status quo, however, Congress is trying to influence and threaten the MLAs in many ways, sources added.

Seeking protection, the leaders urged the police officer to make necessary arrangements to ensure that the leaders are not allowed to meet them.

"We the respected Members of Karnataka Assembly are currently staying at Renaissance Hotel Powai, would like to inform you that we have absolutely no intentions in meeting Shri Mallikarjun Kharge ji or Ghulam Nabi Azad ji or any Congress dignitaries or functionaries from Maharashtra and Karnataka Congress team leaders or any other political leaders. We anticipate serious threat from them. We hereby request you to kindly make necessary arrangements to stop these people from meeting us in case the situation arises," the letter read. 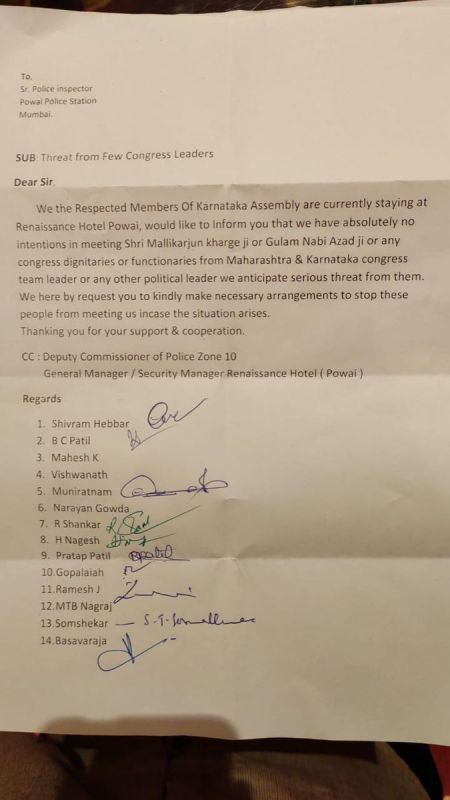 On July 11, the dissident MLAs had returned to the hotel here after meeting Karnataka Assembly Speaker K R Ramesh Kumar in Bengaluru.

The development came after the Supreme Court had directed them to meet the Speaker and resubmit their resignations afresh.

In a twist to the political stalemate in Karnataka, the apex court had on July 12 ordered a status quo until July 16 on a plea filed by 10 dissident MLAs of Congress and JD(S) seeking a direction to the Assembly Speaker to accept their resignation and not proceed with the applications for their disqualification.

Infighting within TMC over lapses in Cyclone Amphan relief work