DECCAN CHRONICLE WITH AGENCY INPUTS
Published May 15, 2016, 8:38 am IST
Updated May 15, 2016, 1:58 pm IST
The Commission warned that if the two leaders fail to respond to the showcause notice, it will take action against their parties.

New Delhi: The Election Commission on Saturday night issued notices to Chief Minister J Jayalalithaa and DMK chief M Karunanidhi for violating model code of conduct by not “reflecting rationale for the promises” made in their parties’ manifestos and ways to meet financial requirements for implementing them.  The Election Commission asked both of them to explain their stand for non-compliance of guidelines of the agency.

The development accentuates the prevailing hullabaloo in the state as it goes to polls on May 16.

The two notices, which has virtually similar wordings say that prima facie the manifestos of the two parties "have not substantially fulfilled the guidelines of the Commission". 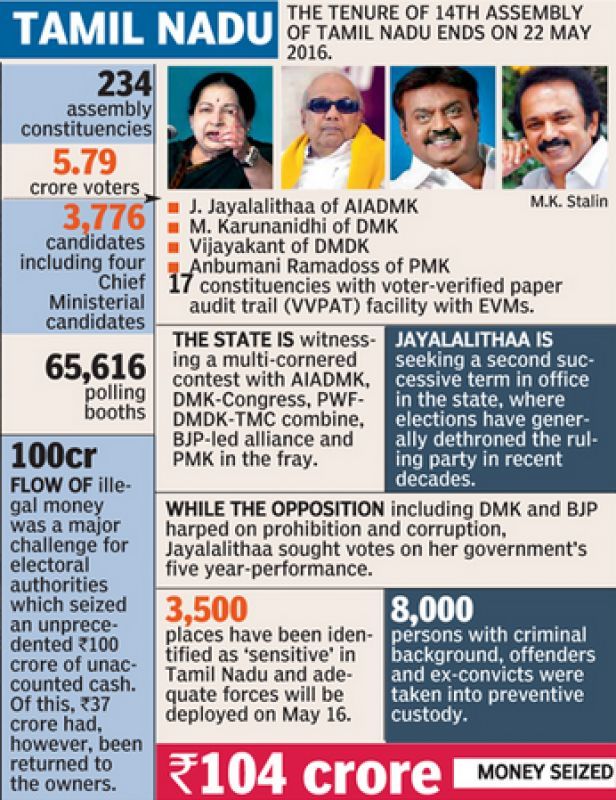 The poll panel gave them time till 5 pm on May 15 to respond "to explain your stand for non-compliance of the guidelines of the Commission and also reflect the rationale for the promises made in your manifesto and broadly indicate the ways and means to meet the financial requirement for the same."

The Commission warned that if the two leaders fail to respond to the showcause notice, it will take "further appropriate action" against their parties without further reference to them."

The showcause notice is based on complaints from people regarding the election manifestos.

Referring to the guidelines on election manifesto for political parties and candidates, the Commission reminded the two parties of section 3, which says that "in the interest of transparency, level-playing field and credibility of promises, it is expected that the manifesto also reflects the rationale for the promises and broadly indicate the ways and means to meet the financial requirement for it.

"Trust of voters should be sought only on those promises which are possible to be fulfilled."

Both the party supremos have left no stone unturned in their attempts to woo voters. Be it colour TVs or cancellation of medical exams, the arch rivals have promised to bestow every possible thing that would substantiate their chances of winning the polls. Parties in Tamil Nadu are known to promise things like colour TV, mixer grinder, ceiling fans and free rice in their election manifestos.