Finance minister T. Harish Rao is reportedly in a jubilant and self-congratulatory mode after presenting his maiden budget.

Finance minister T. Harish Rao is reportedly in a jubilant and self-congratulatory mode after presenting his maiden budget in the Assembly last Sunday. Chief Minister K. Chandrashekar Rao, too, patted the finance minister for “presenting a welfare-oriented and Hyderabad-centric budget, despite the economic slowdown”. During the reply on the budget, too, Mr Harish Rao appeared confident of handling all the criticism of the rather weak opposition that the budget was an “exercise in fantasy, far removed from reality”.

Congress leader Mallu Bhatti Vikramarka, who lost his status of leader of the opposition when several MLAs of his party defected to the ruling par-ty, led the strong hitback, when he charged Mr Harish Rao of misleading people of TS by claiming a budgetary surplus without explaining any rationale on how to fill the actual deficit of `33,000 crore. Must be the headiness of the applause from his boss, and uncle, that Mr Rao’s only response was to ridicule Congress members of “turning a blind eye to the growth achie-ved by TS in all sectors”, and in such praise-induced euphoria, dismissed all counters as coming from those who did not “thoroughly study the budget papers”.

Everyone is aware that Telangana state Chief Minister K. Chandra-shekar Rao and his AP counterpart Y.S. Jagan Mohan Reddy have cordial relations. On some issues, Mr Rao follows in Mr Reddy’s footsteps, and on others, the other mirrors his senior friend.

Now, others are mirroring them in their belief that imitation is the sincerest form of flattery. After the 2018 Telangana assembly elections, Congress leader Vonteru Pratap Reddy, who contested against TRS chief Mr Rao from Gajwel constituency subsequently joined the TRS.

A while later, in AP too a similar pattern was obser-ved, wherein Telugu Desam leader Satish Reddy, who contested against both Y.S. Rajasekhara Reddy in the past and recently against Y.S. Jagan Mohan Reddy from Pulivendula assembly constituency in Kadapa district too joined the YSRC.

The only notable contrast was that while Mr Vonteru joining TRS was a tame shift, Mr Satish Reddy joining the YSRC came a rude jolt to the Desam. 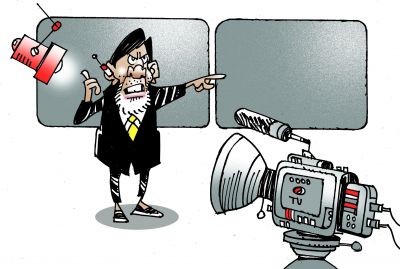 People watching Telugu Desam supremo N. Chandrababu Naidu live on TV the other day would have thought he gave Arnab Goswami, and many a bombastic anchor sculpted in his poor imitation, a run for his money. Within no time after TD leaders and a lawyer were attacked by YSR Congress leaders in Macharla town of Guntur district, Mr Naidu donned the role of a news anchor.

Supported by a few media organisations known to be friendly to him, he went live in commenting about the real-time flow of events even as they unravelled, following the attack. He conducted a professional quality “phone-in” of former MLA Bonda Uma Maheswara Rao and asked him to explain the situation on the ground. Naidu then called senior TD leader Varla Ramaiah and asked him to react to the incident.

He kept exhorting viewers to see replays of a video, wherein YSRC leaders were vandalising a car in which the TD leaders were travelling. In between, he was airing his comments against Chief Minister Y.S. Jagan Mohan Reddy and his partymen for unleashing anarchy on the streets of Andhra Pradesh.

The veteran politician who is fond of often boasting about his 40 years of career in politics, proved that he could excel in TV journalism too, if he wishes to switch over to a new career.

Panchayat raj minister Errabelli Dayakar Rao was in a low for a while now over fears that his party and Cabinet boss K. Chandrashekar Rao was upset with him, as per news reports over his “unwarranted intervention” against Cong-ress member Komati-reddy Rajagopal Reddy on irrigation projects during a recent discussion in the ongoing budget session of the Assembly.

The Chief Minister, however, made him happy when he publicly annou-nced during a short discussion on Palle Pragathi that internal surveys “revealed” that Mr Dayakar Rao was found to be the “best performer” and “one of the hardest working ministers” who had excelled as the PR minister. As soon as Mr Rao made this statement, colleague ministers and MLAs were seen congratulating him in the lobbies of the Assembly. 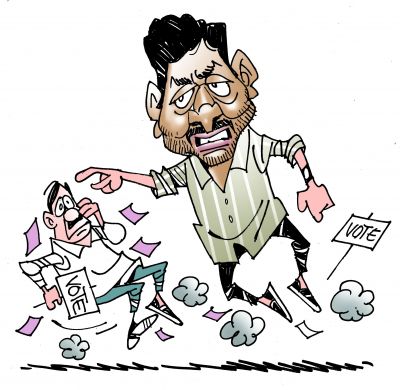 Jagan Reddy’s no nepotism rule miffs leaders in the YSRC

In any state, election of family members of the top political family is a formality, wherein sincere, loyal and hardworking party leaders and workers lose opportunities to the dictum 'blood is thicker than water'.

But trying to turn the tide, YSR Congress chief Y.S. Jagan Mohan Reddy has taken bold decisions, including an ordinance to check distribution of money and liquor in local body elections.

Jagan has also directed party leaders, particularly ministers, MLAs, MPs and other seniors not to field their family members in the ensuring elections.

He also sternly stated that if anyone fields a family members, the B-form would not be given. Party cadre is happy with this decision, but guess who is glum?

SC slams Nupur Sharma; says she 'must apologise to nation'