Neta's Natter: KCR and the Sea?

KCR and his haul of health challenges

At the start of the classic novella, The Old Man and The Sea, which finally won Ernst Hemingway the Nobel Prize for literature, an entire village wishes to boycott Santiago, the old fisherman, because they fear he has gone ‘salao’ and can no longer catch any fish. Parents don’t wish to let their children fish with him. Derived from the Spanish word salado, salao means extremely irredeemably unlucky.

In Telangana, ruling party circles are speaking in hushed tones whether an irreversible whisper campaign is sweeping across the population, especially the rural masses, that chief minister K. Chandrashekar Rao is ‘salao’.  If what common people are talking is an indication, yes. KCR is a great leader but ever since he was elected for a second term, disease outbreaks have been raging in the state. Such talk began last year, when malaria, dengue, chikungunya and typhoid spread during the rainy season. With Covid, the ill-reputation is firming up. As one villager from KCR’s constituency summed it up, “whatever he gives us or not, like it would not rain when Chandrababu Naidu was CM, if KCR is in power we will fall ill. His reign means a divine curse of disease.”

TRS leaders are hoping their supreme leader can defy the superstition like the old man in Hemingway’s epic. 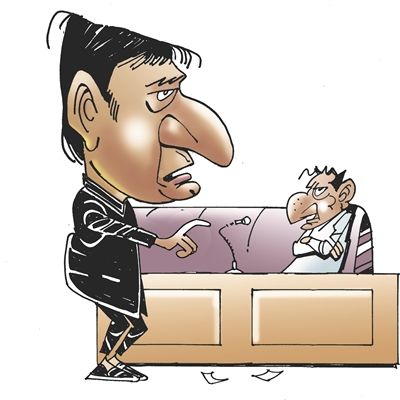 Talking of literary epics, K Chandrashekar Rao undergoes quite a bit of metamorphosis not too dissimilar to Franz Kafka’s protagonist Gregor Samsa when it comes to facing the MIM floor leader Akbaruddin Owaisi. It is quite an unimpeachable dictum that KCR is Telangana’s greatest orator, a speaker with peerless wit, a man whose rhetoric ranges from scathing rebuffs to chilling rebukes. His whiplash one-liners, smart squibs and snide retorts can destroy the courage of his opponents. Yet, the mighty KCR who waxes eloquent against most opposition leaders and gives an earful to journalists at press conferences, transforms a la Samsa into a reserved, timid and soft-spoken man on the back foot whenever he gets to face a barrage of questions from Akbaruddin Owaisi.

Barely does KCR start giving a reply when Akbar, with his perpetually angry and vituperative harangue, interrupts. Getting on KCR’s nerves with ease, Akbar succeeds in pushing Chandrashekar Rao on the defensive — his legerity seems to vanish, he clambers for an answer and speaks in a soft diphthong of a tune, placating the angry young legislator from Chandrayangutta.

Not just KCR, but even his son, the grandiloquent and unfailingly brilliant KTR too finds it hard to parry the frequent assaults from the frenemy. Why is KCR so wary or even afraid of Akbar, politicians and Assembly watchers wonder and ask. It is not the recent demolition of two mosques that seems to be the issue, because KCR is never defensive on such issues. It is just that Akbaruddin gets the better of the father-son duo as no one else can in the entire state. 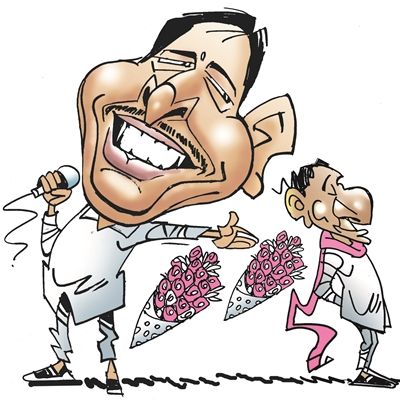 It’s not always that a politician faults himself while on record. That credit goes to Danam Nagender, the TRS legislator from Khairatabad who switched sides from the Congress. Speaking on the Revenue Bill in the Assembly, Danam began lauding chief minister K Chandrashekar Rao. Suddenly, he said he was ashamed of his earlier stance against the TRS and his verbal attacks on its leaders while in the Congress — Danam was a minister from 2009 to 2014. It was Danam who had called KCR and his K T Rama Rao “galeeju gallu” (nasty persons). His sudden confession took both the TRS and the Congress by surprise. An MLA was later heard saying that is is all the magic of power. 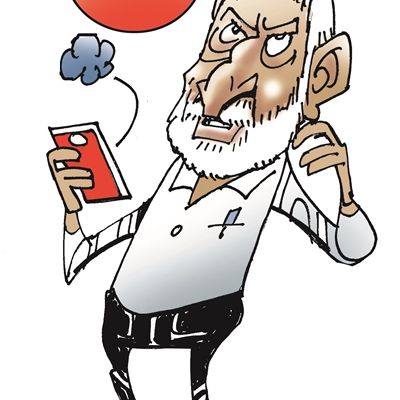 After a lull, apparently caused by chief minister Y S Jagan Mohan Reddy’s snub, V Vijayasai Reddy, YSR Congress general secretary, is back to his favourite activity of making controversial statements and landing his party in a tight spot. Recently, DGP Goutam Sawang wrote a letter to opposition leader N Chandra-babu Naidu to furnish evidence to support his allegations that the government had been tapping the phones of political leaders and legal luminaries.

Separately, the Chittoor district police issued notices to Chandrababu Naidu and his son Lokesh, asking them to furnish information in support of their allegations that an autorickshaw driver, Om Pratap, was killed by YSRC leaders. In the midst of this, Sai Reddy made the wild accusation that Chandrababu Naidu had a role in the recent gutting of the chariot at the Narasimha Swamy temple in Antarvedi, East Godavari district, inviting criticism as well as a demand from several quarters that he also be issued notices by the police seeking evidence to back his allegations, as had been done in the case of the Naidus. Watch this space for the next gaffe.

Congress is a divided and confused party: Modi